Narrative shattered  – US inflation is unrelenting, throwing the "Fed pivot" story up in the air and boosting the dollar. Europe's efforts to mitigate the energy crisis were insufficient to withstand the greenback's strength. All eyes are now on the world's most important central bank, with everything else playing second fiddle.

This week in EUR/USD: Steaming hot US inflation

Markets refused to believe Fed Chair Jerome Powell's hawkish rhetoric and looked beyond September's rate hike to some moderation in inflation and tighter policy. Price rises, however, are unrelenting. The Core Consumer Price Index jumped by 0.6% in August, double the early expectations. Other CPI indicators moved up as well, triggering speculation of a 100 bps rate hike.

EUR/USD collapsed, and managed only small bounces in response to weaker US data such as underwhelming retail sales figures. Consumption is rising, but only in nominal terms – it is unable to keep up with inflation.

In the old continent, the energy crisis remained prominent, but two developments helped keep the common currency afloat. First, EU leaders seem to be making headway toward reaching an agreement on subsidizing consumption funded by an exceptional windfall tax.

Circling back to monetary policy, European Central Bank officials came out in an almost coordinated chorus to support large rate hikes in October. That contrasts the more nuanced message from ECB President Christine Lagarde after the latest rate decision.

All in all, the euro is giving a fight – but King Dollar's grip on the throne looks strong.

When will the war end? It is hard to know, but Ukraine's surprising advance broke the stalemate and backs the case for ongoing European support for the embattled country. Assuming there is no immediate ceasefire, high gas prices are set to continue weighing on the European economies

In turn, that adds pressure on the EU to turn its initial proposals to decisions. The faster a decision comes – and the more realistic it is – the better for the euro. If some form of rationing appears in the final proposal, it would probably support the currency. Despite the economic damage, rationing would be seen as acknowledging reality and avoiding blackouts.

Further comments from ECB officials could move the euro, but probably to the downside. After a chorus of hawkish comments, it would take a dovish remark to stir interest – and to the downside. Acknowledgments of a recession were far and few between in recent weeks, and they could come to haunt the euro now.

The preliminary Purchasing Managers' Indexes (PMIs) from S&P Global stand out on the economic calendar. All the indicators came out below 50 in August, representing contraction. Further deterioration is likely, especially in Germany's all-important Manufacturing PMI. Gas rationing would hurt Europe's industrial locomotive. On the other hand, the services sector could be more upbeat. 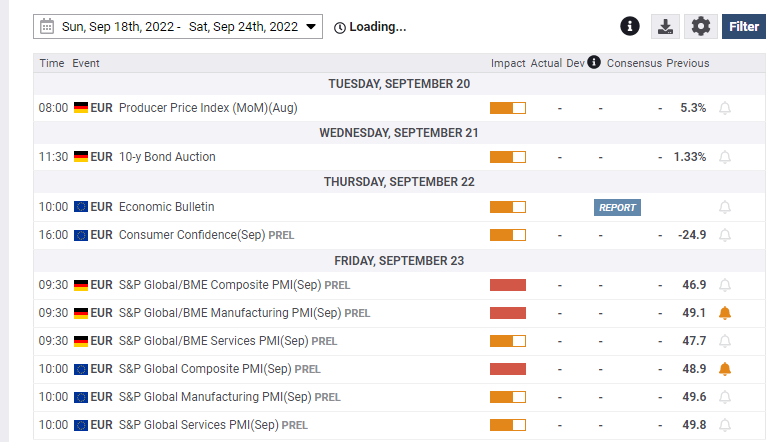 It is hard to exaggerate the importance of Wednesday's Federal Reserve decision to financial markets – I think we will see tense trading ahead of the release, then an explosion of volatility, with ripple effects later in the week. The baseline scenario is for the Fed to raise rates from a range of 2.25-2.50% to 3.00-3.25%. 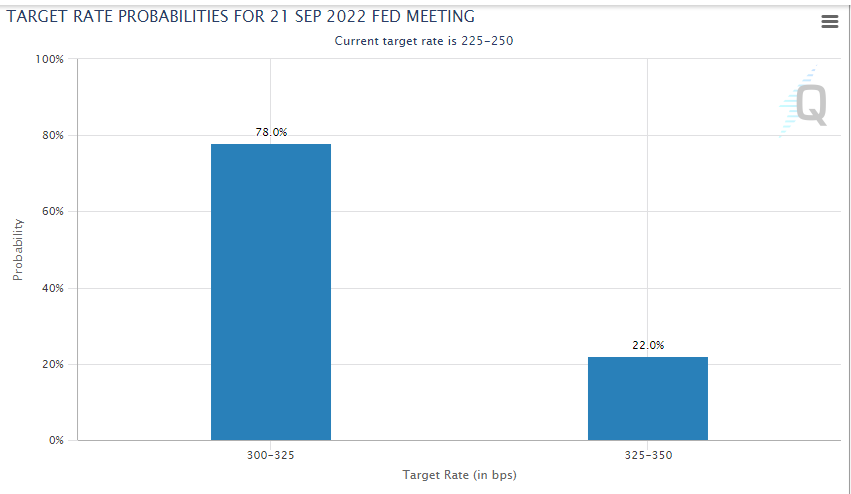 Starting from Monday and Tuesday, investors will be refreshing the Wall Street Journal's website for updates from Nick Timiraos. This reporter conveyed the Fed's change in June – raising interest rates by 75 bps instead of 50 bps that had been promised. That was the bank's way of circumventing its self-imposed "blackout period." Ten days prior to rate announcements, officials refrain from speaking in public.

Current expectations are for a third consecutive triple-dose, 75 bps rate hike. At the time of writing, bond markets price a chance of over 70% for that outcome. If Timiraos' Fed preview sticks to that line, we could see the dollar edge lower. A suggestion of 100 bps would send the dollar soaring once the article hits the wires.

Assuming a 75 bps hike, the focus will be on the "dot-plot" – the bank's forecasts for growth, inflation, unemployment and interest rates, the most important measure. The Fed has been stressing it would refrain from cutting rates next year and that the peak interest rate would be just above 4%. Now its public comments would come to a test in projections.

A "terminal rate" nearer 5% would be significantly hawkish, sending the greenback higher. It would exceed market estimates. Conversely, a more modest 4.50% level would allow for a "buy the rumor, sell the fact" outcome, grinding the greenback lower.

The bank's projections for borrowing costs at the end of this year and the next are also significant. With only two meetings left after September, projections for 2022 are considered more reliable than ones for 2023. Markets currently price a high chance that interest rates will end the year at a rate of 4.25-4.50%, which would be 125 bps above a 3.00-3.25%, assuming a 75 bps hike. 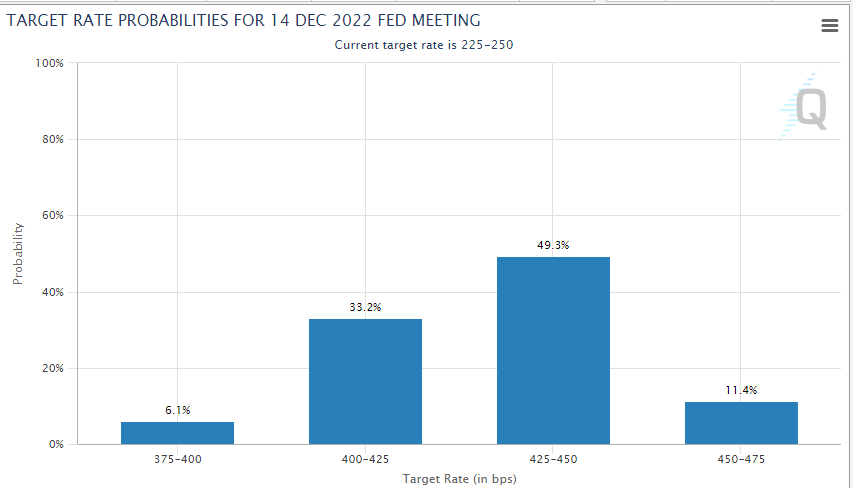 Last but not least, Fed Chair Jerome Powell is slated to hold a press conference at 18:30 GMT, 30 minutes after the announcement. Any hints about the next moves that contradict the dot-plot in some way could trigger further action.

Powell's comments on the probabilities of a recession – and how willing the Fed is able to endure one – are also critical. So far, the bank has been allowing stock markets to fall, with one member even glowing with joy after the market's negative response to previous Fed hawkishness.

Acknowledging recession risks – and accepting them – would further boost the dollar. It would show the Fed is set to continue raising rates even in the face of economic adversity, a crusade against inflation.

On the other hand, signaling concerns about an increase in unemployment would weigh on the dollar. The Fed has two mandates: price stability and full employment. It is easy to focus on inflation when the labor market is steaming hot. Yet like inflation, unemployment could also rise.

Other developments are likely to be overshadowed by the Fed. Investors will likely dismiss worries about the housing sector and S&P Global's PMIs in such a week. 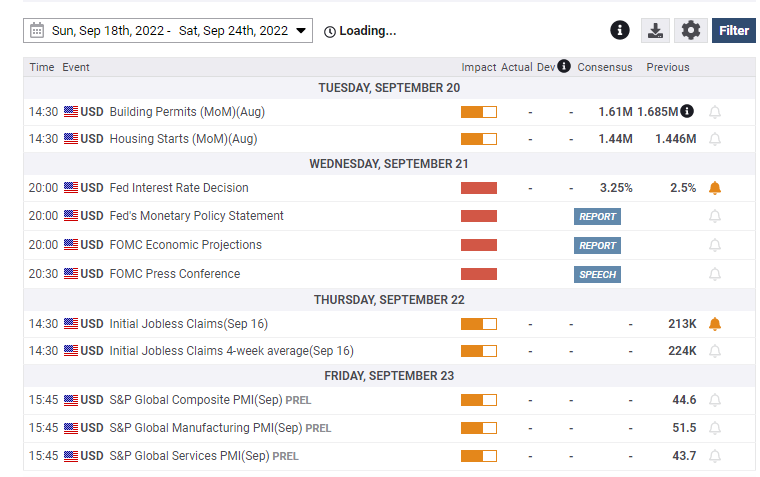 EUR/USD is trending lower, struggling to stage meaningful recoveries. It has dropped back below the 50 Simple Moving Average (SMA) on the four-hour chart. That is a bearish sign. In its recovery attempts, the Relative Strength Index remained below 50 during the recovery attempt. 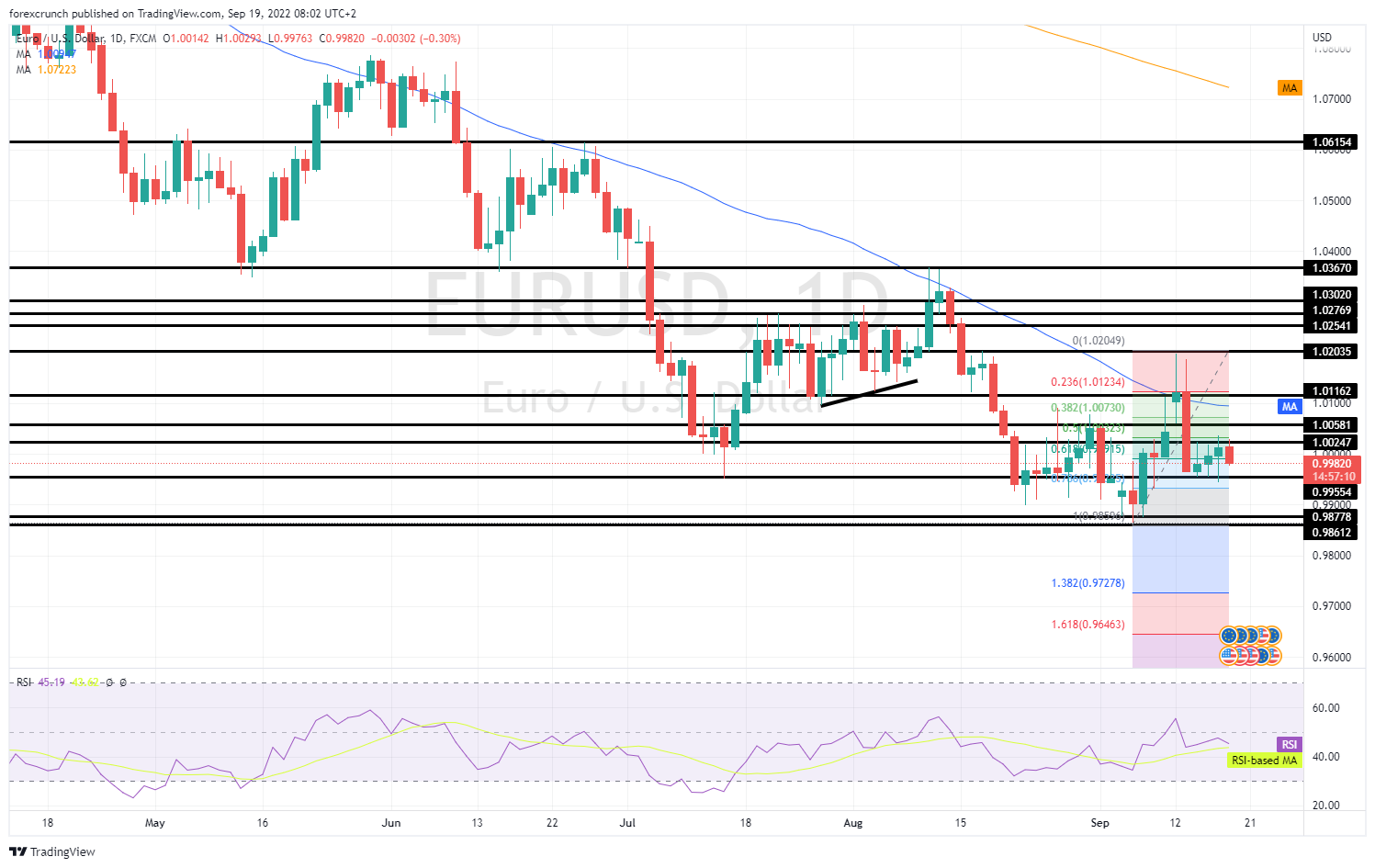 Even if the Fed will eventually begin cutting rates earlier and from a lower rate than they state, officials need to convey a determined, unequivocal message of fighting inflation – whatever it takes. I think that would extend dollar strength, despite the greenback's elevated position.

The FXStreet Poll shows experts are bearish on EUR-USD, seeing it depressed around 0.99 in the short, medium and longer terms, with a somewhat higher average target in the longer term. 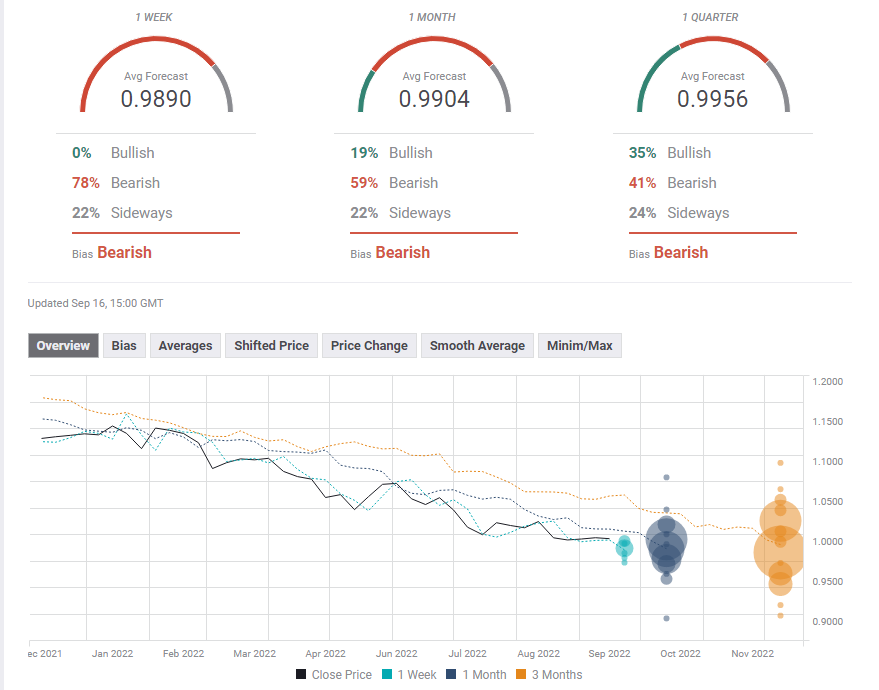