The EUR/USD pair plummeted to a 20-year low of 1.0071 on Friday to end the week at around 1.0170. Panic took over financial markets amid lingering recession fears and mounting inflationary pressures, spiced with an energy crisis in Europe, courtesy of Russia.

Investors moved into safety, and the dollar made the most out of it. Demand for US government bonds weighed on yields at the beginning of the week, although the Treasury yield curve inverted, and hell broke loose. The yield on the 2-year note is higher than that on the 10-year note, usually seen by market participants as a hint of an upcoming economic setback.

In fact, central banks poured some cold water on fears amid policymakers' decision to not innovate on monetary policy.

The FOMC released the Minutes of its June meeting on Wednesday. The document showed that Federal Reserve officials agreed high inflation warranted restrictive interest rates and are open to being even more restrictive if inflation persists. Also, the majority of participants saw a downside risk to growth while judging there was a “significant risk” that higher inflation could become entrenched.

The Fed left the door open to another 75 bps hike, but investors welcomed the fact that it refrained from hinting at a 100 bps rate hike or any other more aggressive measure.  Another thing that was missing from the document was a reference to a potential recession. The fact that the Fed did not mention it, however, does not mean the risk is not there. The Fed downwardly reviewed growth forecasts while remarking that inflation risks remain elevated.

On Thursday, it was the turn of the European Central Bank to release June meeting Accounts. The Governing Council agreed it needed to preserve its credibility “by showing its resolve.” Some members still wanted to keep the door open for a larger rate hike in the July meeting, although President Christine Lagarde reiterated multiple times the hike would be 25 bps.

Central banks put a temporal halt to the dollar’s rally by helping equities to recover some ground, but the greenback ends the week retaining its strength across the FX board.

An early trigger of the weekly panic trading was macroeconomic data, as S&P Global published the final June PMIs, which showed that growth in the EU slowed to a 16-month low. Also, Retail Sales in the Union rose a modest 0.2% in May, while German Industrial Production contracted 1.5% YoY in the same month.

US data, on the other hand, was mixed, although headlines were encouraging. The June ISM Services PMI printed at 55.3, below the previous 55.9 but above the 54.5 expected. However, employment and inflation-related sub-indexes missed expectations and hinted at more turmoil ahead. The June Nonfarm Payroll report brought a positive surprise, as the country added 372K new jobs in the month, much better than the 268K expected. The Unemployment Rate remained steady at 3.6%, while the Labor Force Participation Rate ticked lower to 62.2%.  The report barely moved the bar in terms of the Fed’s decision, having a limited impact on the FX market.

Inflation in the eye of the storm

The upcoming week will be critical for currencies, as the US will release June inflation figures. The Consumer Price Index is expected to have risen to 8.7% YoY, from 8.6% in May. The core reading, however, is foreseen contracting from 6.0% to 5.7%. The country will also publish June Retail Sales, expected to have recovered after dipping in the previous month, and the preliminary estimate of the July Michigan Consumer Sentiment Index.

Across the pond, the focus will be on Germany, as the country will publish the July ZEW survey and the final estimates of June inflation.

The EUR/USD pair is trading at levels last seen in December 2002. The pair is oversold in the weekly chart, but the bearish momentum is strong. Technical indicators maintain their firmly bearish slopes within extreme levels, without signs of downward exhaustion. The 20 SMA stands over 600 pips above the current level, heading south almost vertically and far below the longer ones, reflecting sellers’ strength.

The daily charts hint at a potential bullish correction. Technical indicators have turned flat at extreme levels, while the current candle has a long downward wick, although it could also be attributed to profit-taking ahead of the weekend. Additionally, the EUR/USD pair remains far below bearish moving averages, which suggests that the bearish trend is firmly in place.

Further declines could be expected on renewed selling interest below 1.0100, with parity as the next bearish target. Below the latter, the slump could continue toward 0.9860, a major static support area.

Beyond 1.0200, on the other hand, chances are of a steeper corrective recovery that would meet initial resistance at 1.0335, followed later by the 1.0420 price zone. 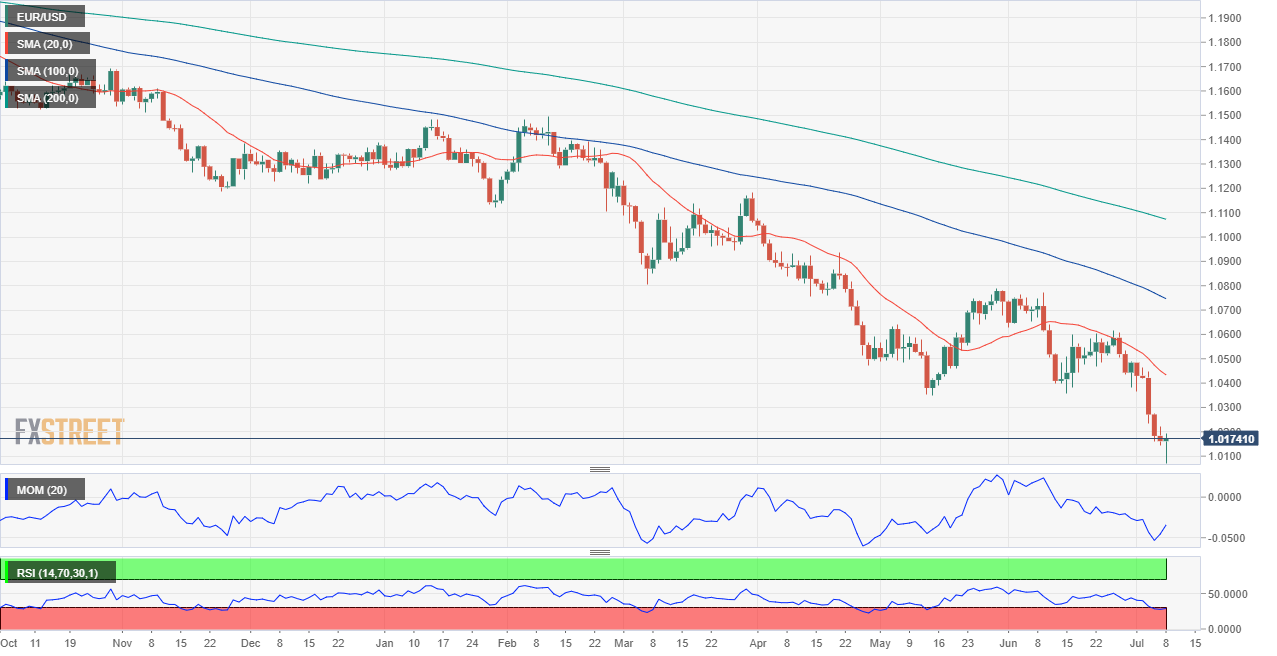 The FXStreet Forecast Poll shows that EUR bears are willing to keep pushing lower, as 67% of the polled experts are bearish in the near term, which means that, on average, the pair will target sub-1.0100 levels next week. However, a break below parity seems unlikely. Most poll participants are betting on a comeback in the monthly and quarterly perspectives, seen then returning to the 1.0400 price zone.

In the Overview chart, however, the bearish pressure hardly recedes. Most possible targets are located below the current level in the weekly and monthly views, although some strongly bullish bets distort the average. In the quarterly perspective, some participants see targets below 1, although most of them accumulate in the 1.02/1.06 price zone.