The EUR/USD pair reached 1.1945 this week, a fresh 2-month high, retaining most of its gains heading into the weekend. The dollar got no love from speculative interest,  while the shared currency advanced despite some tepid macroeconomic figures.

It was an intense week, even though the FX price action didn’t reflect it. Among other things, US President Donald Trump has agreed to begin a formal transition with President-elect Joe Biden´s staff to take office. At the same time, he vowed to keep contesting the election result. It was the closest he will get to concede.

The Dow Jones Industrial Average soared past 30,000 for the first time ever. US indexes posted substantial weekly gains, although European ones traded mixed, as Brexit concerns and tepid German data weighed on them.

Meanwhile, the coronavirus pandemic is out of control in all US states but Hawaii. Hospitalizations in the country have been hitting records for seventeen days in-a-row, currently at 90K. As of Friday, the country has a sad record of having reported roughly 270K deaths. Things are just a bit better in Europe after almost a month of restrictions, although the Continent reported 225,308 new cases and 5,276 deaths on Thursday. France is slowly moving into easing restrictions while German Chancellor Angela Merkel said that some measures would remain “for the foreseeable future,” as the country reached its highest daily death rate since the pandemic began.

Vaccine hopes diluted among rising cases and soft macroeconomic figures. Also, AstraZeneca announced late Thursday that it would repeat its vaccine trials, amid mixed results due to mistaken dosage of the experimental antiviral. The news dented further the market’s mood, affecting mostly European markets. The Thanksgiving Holiday in the US kept local indexes afloat.

Data wise, macroeconomic figures reflected the latest knockdowns’ effects on European economies. Markit preliminary estimates of business activity showed that services output plummeted through the Union into contraction levels, with the PMIs posting their lowest reading in five years. Manufacturing activity remained in expansion territory. US Markit figures, on the other hand, resulted upbeat, boosting equities and the greenback.

German Q3 Gross Domestic Product was upwardly revised to 8.3% QoQ, but the IFO Survey showed that expectations contracted in November. Also, the GFK Consumer Confidence Survey posted a contraction in December, from -3.2 to -6.7.

As days went by, enthusiasm about the US encouraging PMIs faded, as the country reported a contraction in Consumer Sentiment, down to 76.9 in November according to the Michigan University. Also, the Q3 GDP in the US was confirmed at 33.1% annualized, against an expected upward revision, while Initial Jobless Claims for the week ended November 20 jumped to 778K.

December’s first week will bring the preliminary estimates of the EU and Germany inflation data and the official US November ISM PMIs, which usually trigger relevant movements. Germany and the EU will unveil October Retail Sales figures,  while on Friday, the US will release the Nonfarm Payroll monthly report. The country is expected to have added 520K new job positions in November, while the unemployment rate is expected at 6.8%.

The EUR/USD pair is posting its best weekly settlement for the year, partially recovering its long-term bullish momentum. In the weekly chart, the pair surged after flirting with a bullish 20 SMA, which keeps advancing above the longer ones. The Momentum indicator is bouncing from its midline, while the RSI rises modestly, currently at around 60.

Technical readings in the daily chart suggest further gains ahead, as the pair is comfortable above bullish moving averages. Technical indicators remain within positive levels, although the Momentum indicator has a limited upward strength while the RSI consolidates near overbought readings, amid the light volumes from these last two trading days.

1.1960 is the only resistance level in the way towards the year high at 1.2011. Beyond this last, the pair could go near the 1.2100 figure before finally giving up. Supports, on the other hand, come at 1.1880 and 1.1790. Losses below this level seem quite unlikely in the current fundamental scenario. 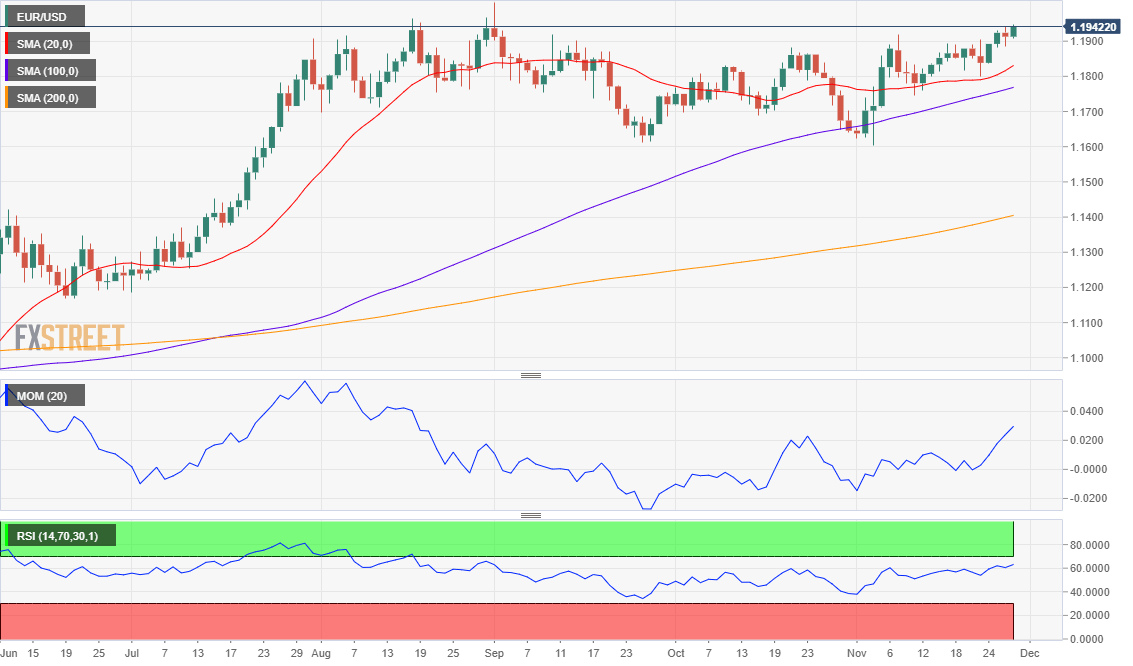 The FXStreet Forecast Poll shows that the pair is set to trade at current or higher levels in the upcoming weeks. Most polled experts are bullish in the weekly view and the quarterly perspective,  although bears a majority in the monthly one. On average, the pair is seen holding below the 1.2000 figure

However, the Overview chart shows an increased number of experts betting for targets at around or above 1.20, mainly in the monthly and quarterly time-frame. The lower end of the range is 1.1400, although those seeing the pair below 1.18 are a minority.