The EUR/USD pair is ending the week little changed at around 1.1040, recovering from a fresh 4-week low of 1.0988. Uncertainty around developments in the US-China trade deal has continued to lead the way, with the American dollar and the market’s sentiment, seesawing throughout the week.

European economies at a brink of collapsing

First-tier data coming from the EU failed to impress. German’s inflation came in at 0.9% YoY, while the EU CPI for the same period printed at 0.7%, both in line with the market’s expectations. Both economies published updates on growth, with the preliminary estimate of German Q3 Gross Domestic Product up by 0.1% and that of the Union up by 0.2%. The numbers were slightly better than anticipated, but indicating that the economies are barely avoiding recession, without signs of economic improvement.

The US released October inflation, which was up yearly basis by 1.8%, while the core reading resulted in 2.3%. Retail Sales in the country were slightly better than expected, up by 0.3% MoM.

The back and forth around a trade deal between the US and China have kept investors on their toes. News that US President Trump was yet to decide on removing tariffs weighed on the market’s mood, and the subsequent attempts to bring back confidence fell short of doing so. Fortunately, Wall Street rallied to record highs, offsetting chances of panic taking over the market.

This Friday, Trump’s advisor Kudlow made another encouraging comment, indicating that the arrangement is in its “final stages.”-US Commerce Secretary Wilbur Ross, later added that a trade deal would be done “in all likelihood.”

Hopes about a resolution between the US-China conflict helped the EUR advance modestly against its American rival, although the shared currency remains a laggard.

The upcoming week will be a light one in terms of macroeconomic data, with a light calendar until Wednesday, when the Federal Reserve will release the Minutes of its latest Meeting. Nevertheless, the document will hardly surprise the markets as Chief’s Powell testified this week before the Congress, without changing his well-known hawkish stance.

The ECB will publish the Minutes of its latest meeting on Thursday, while head’s Lagarde is scheduled to speak on Friday.

Also at the end of the week, Markit will release the preliminary estimates of November Manufacturing and Services PMI for the Union and the US. Most figures are expected to come in below the final October readings.

The EUR/USD pair has bounced from around the 61.8% retracement of its October rally and recovered above the 50% retracement of the same run, the immediate support at 1.1020. The long-term picture, however, shows that the risk remains skewed to the downside, as, in the weekly chart, the pair continues developing below all of its moving averages, with the 20 SMA maintaining its bearish slope below the larger ones. The Momentum indicator retreat from its mid-line, while the RSI consolidates at around 45.

In the daily chart, technical readings also favour the downside, as the 20 and the 100 DMA continue heading firmly lower above the current level, while technical indicators have recovered within negative levels, although their bullish strength is quite limited.

The pair would need to extend its recovery beyond 1.1080 to have a chance to recover the upside next week, although it would hardly find the strength to break beyond the 1.1160/80 price zone. Below the mentioned weekly low, the decline will likely accelerate, with the pair then poised to retest the yearly low at 1.0878. 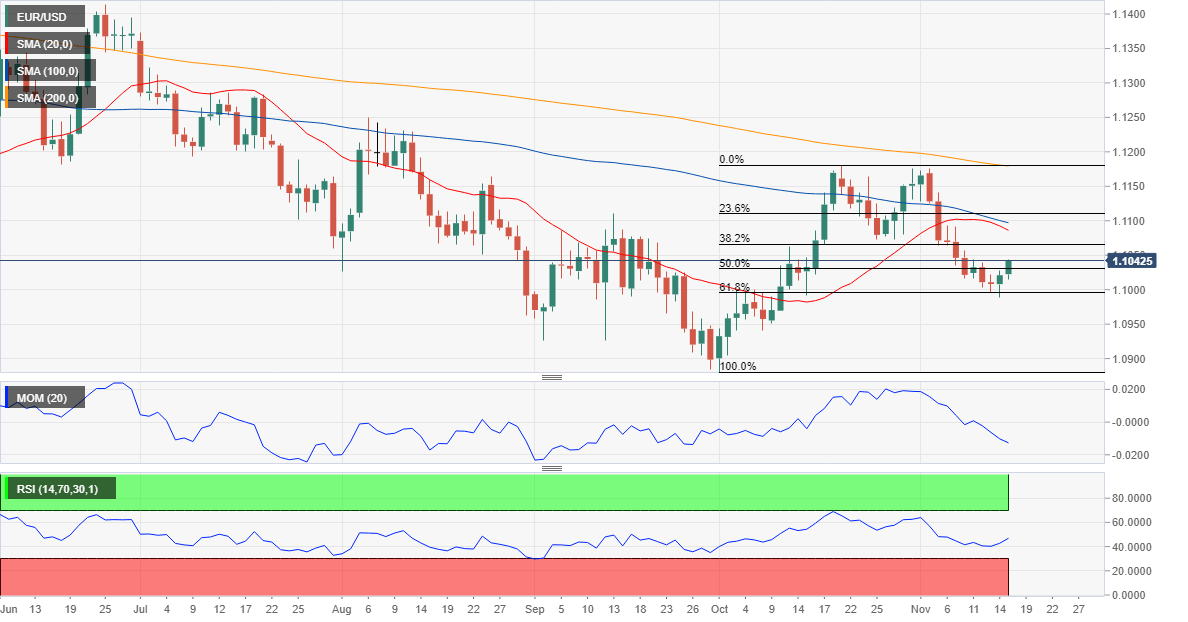 The FXStreet Forecast Poll shows that sentiment favours the EUR next week seen advancing against its American rival, although on average, the pair is seen around the current level. The sentiment turns neutral in the monthly view, with even bulls and bears. In the longer run, bears take the lead once again, but still, the average target it is stuck a handful of pips above the 1.1000 threshold.

In the Overview chart, moving averages in the short-term maintain modest upward slopes, losing momentum in the wider view. The spread of targets is quite wide in all the time-frame under study, reflecting the ongoing uncertainty about global economic developments.

USD/JPY Forecast: The Fed remains in focus with the minutes, outlook turns bearish

The recent Bitcoin price crash seen on Wednesday is comparable to the one in late April. However, unlike the last time, this drop was not due to rumors of new tax proposals.

Wednesday's wake-up call to the dovish Fed was repeated with the release of PPI on Thursday. Core CPI was 0.7% versus forecasts for 0.4%. Now is buy the dip still in focus and is don't fight the Fed still the trade?