The common currency trimmed its weekly losses against the greenback, but remained depressed for a fourth consecutive week, bouncing from a fresh yearly low of 1.1300. Dollar's decline seems a due correction as longs are overcrowded, but absent EUR demand kept the upside in check. Fear and uncertainty were again the main market motors, despite some positive headlines that should have averted it.

The Turkish Lira pulled off record lows, coming under renewed pressure on Friday but still not far from such low. The US and China will resume trade talks next week, with a Chinese delegation traveling to Washington next week. However, news that the US plans to demand China to let the Yuan appreciate overshadowed the optimistic headline.

Macroeconomic data coming from the EU this week was generally encouraging, as Q2 GDP came in better-than-expected at 0.4%, indicating that economic growth keeps doing well, despite some indicators easing ever since the year started. German GDP, in the same period, posted an encouraging 0.5% growth. However, inflation figures were a disappointment, as in July, German CPI rose 0.3%, while for the whole Union, it decreased by 0.3% both in their MoM readings and in line with market's forecasts, but surely backing the ECB's on-hold stance, which makes the EUR  a less attractive investment.

The US, on the other hand, offered some mixed figures, with Retail Sales sharply up, but employment readings generally soft, and a big disappointment coming from August preliminary  Michigan Consumer Sentiment Survey, down to 95.3 from the previous 97.1, its lowest in almost a year, as rising inflation took its toll. According to the official release, the survey reflects " much less favorable assessments of buying conditions, mainly due to less favorable perceptions of market prices." Still, not a concern, but if consumption keeps suffering from higher prices, the Fed may end up backing up for a fourth rate hike, and all hell will break loose. Anyway, as long as the market believes that the US Central Bank will keep the lead in the normalization path, the dollar will run with an advantage.

FOMC Minutes will be out next Wednesday, followed by the Jackson Hole Symposium starting Thursday, with the focus still on political woes. Preliminary August Markit PMI for both economies will also be among the most watched events.

The weekly chart for the EUR/USD pair shows that the recovery from the multi-month low is so far corrective, with the bearish trend prevailing.  But it doesn't deny the possibility of another week of gains, particularly considering the length and strength of the previous decline, as the pair shed 1,200 pips in little over 3 months, with no relevant corrective movement in between.

In the mentioned chart, the price remains well below a strongly bearish 20 SMA, and even below the 100 SMA, although buyers surged on a dip below the 200 moving average. The Momentum remains directionless in negative territory, while the RSI indicator hovers near oversold readings, none of them suggesting the pair could change course.

In the daily chart, a small light of hole appears for bulls, as technical indicators are finally founding from oversold readings, although still far below their midlines and as moving averages accelerate their declines well above the current level,  suggesting that any upcoming recovery will be corrective and that bulls are still sidelined.

The 1.1420/30 region comes as the immediate resistance,  with 1.1500 coming next. This last will be key, as the pair bottomed around it several times before breaking lower. A more sustainable recovery could be seen if the level is surpassed, up to 1.1620. The mentioned yearly low at 1.1300 is the first support, with the next relevant ones coming at 1.1240 and 1.1160 for the upcoming days. 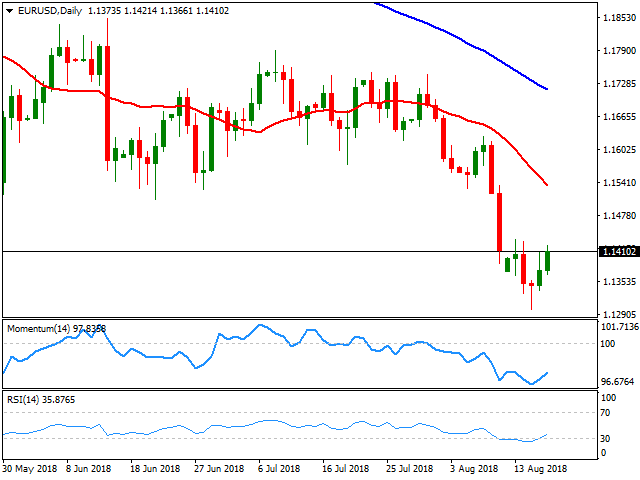 The FXStreet Forecast Poll, at a first glance, offers a neutral outlook, with bears leading the weekly view, and bulls the 3-month one, with the monthly one neutral.  It also  shows averages targets of 1.1400 for the three time-frames under study, but there's a trick  hidden that is unveiled in the FXStreet overview chart: a few that aim for higher targets are  aiming for really high ones, when compared to the current price but the majority is still looking for lower lows, which leads to a firmly bearish trend in moving averages. In the weekly chart, most targets accumulate between 1.12 and 1.13. No clear reading comes in the monthly view, while 1.1000 is now a  more than possible target in the three-month view.