The EUR/USD pair started the week losing the positive momentum triggered by a dismal US Nonfarm Payroll report Friday, retreating from the fresh over two-month high of 1.1347. A tweet from US President Trump over the weekend, indicating that the country and Mexico reached a deal and that he would not apply tariffs to Mexican imports, brought some relief to the financial world and the greenback.

The American currency was far from strong, as there were other risk factors throughout the week that limited the potential of a steeper recovery. Among those were persistent trade tensions with China, and a recently featured conflict with Iran, following news indicating shipping tankers damaged on blasts in the Gulf of Oman. President Trump, accused Iran of being behind the attack, something that the country denies.

In the US-China front, things took a turn for the worse, as not only talks stalled, but it also seems unlikely Trump and Xi-Jinping will be meeting in the next G20 meeting. The US President announced more tariffs coming if they cannot reach a deal by then. Meanwhile, over 600 US companies urged the president to resolve the trade dispute as it's hurting local businesses and consumers.

Weighing on the common currency, the Union's Sentix Investor Confidence index fell in June to -3.3. The report attributed the slump to continued tensions between the US and China over trade. Also, the report indicated that the situation in Germany deteriorated further, sliding into negative territory for the first time since March 2010, lifting odds of a recession in the Union's largest economy. German's inflation resulted as expected, up by 1.3% YoY, while EU's Industrial Production beat expectations, although it fell for 0.4% in April.

In the US, on the other hand, inflation data disappointed, rising by less than anticipated in May, pushing the greenback temporarily lower mid-week. Nevertheless, the risk-averse sentiment alongside solid macroeconomic figures released at the end of the week, make of the greenback the overall weekly winner. US Retail Sales were up in May by 0.5%, slightly below the market's expectations of 0.6%, yet the advanced indicator, Retail Sales Control Group, was up by 0.5%, surpassing the market's estimate of 0.4%. Finally, the preliminary June Michigan Consumer Sentiment Index came in at 97.9, slightly below the 98.0 expected and the previous 100, interrupting just temporarily the dollar's advance.

The upcoming week, the financial world will revolve around the Fed, and any new decision policymakers can make about the monetary policy. Market players are now speculating on two possible rate cuts before the year is over. At the end of the week, Markit will release the June preliminary estimates for the EU and the US PMI.

The EUR/USD pair is set to finish the week back below the long-term descendant trend line that broke to the upside in the previous week. Too close to it to paint a clearer picture, the weekly chart shows that the pair was unable to extend its advance beyond a directionless 200 SMA, now developing also below a bearish 20 SMA. The Momentum indicator recovered up to its mid-line, but lacks directional strength, while the RSI is on retreat mode after nearing its mid-line, skewing the risk to the downside.

The daily chart shows that the pair stalled its advance below a bearish 200 DMA, now trading also below the 100 DMA and dangerously close to the 20 DMA, offering a dynamic support at around 1.1220. Technical indicators in the mentioned chart retraced sharply from overbought levels, keeping their sharp downward slopes and nearing their midlines. 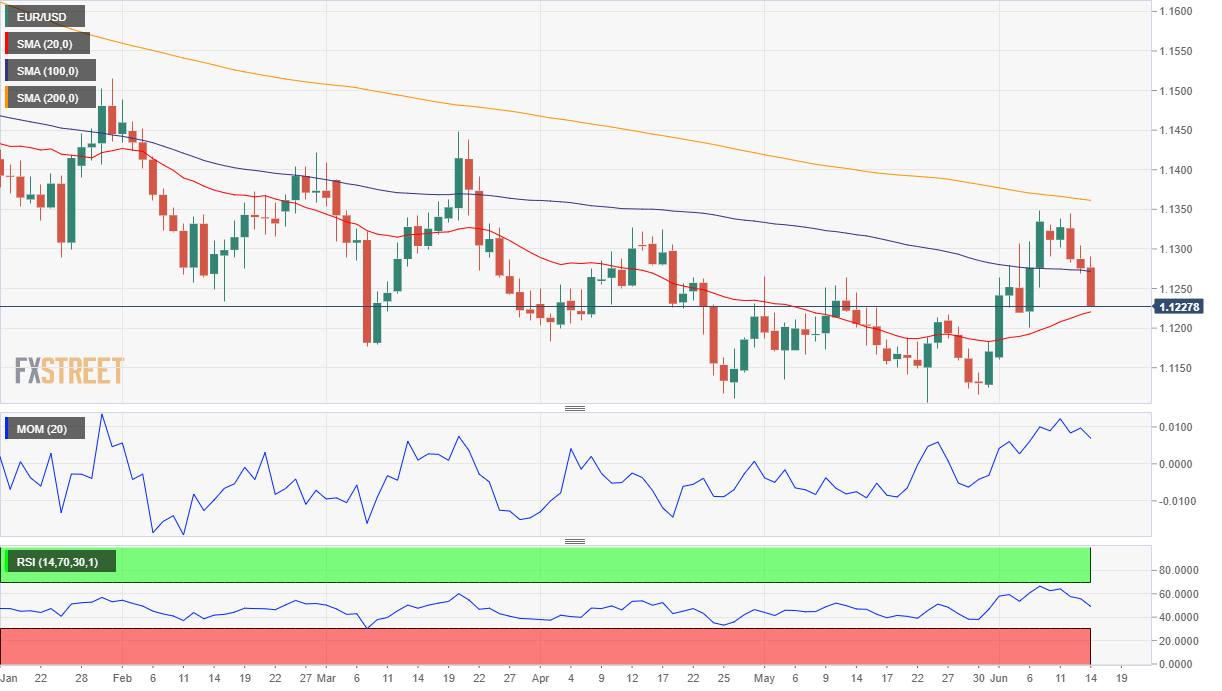 The FXStreet Forecast Poll indicates that the pair could recover the upcoming week, as most polled experts are targeting levels above the current price. However, the pair is seen steady below the 1.1300 figure, with a few exceptions aiming for targets above it. In the monthly view, bears take over control, with 54% of the polled analyst going short and an average target of 1.1162. In the longer perspective, the pair is seen on average at 1.1222, with bulls being a majority with 46%.

The Overview chart doesn't paint things good for the greenback, as the media in the weekly chart is above the current price. Monthly basis, a clearly neutral stance persists while for the quarterly view, the media slowly gains upward strength, with most targets accumulating in the 1.12/1.14 price zone.