The EUR/USD pair has shown little life this last week, ending it barely changed on the downside at around 1.0820. The greenback was generally stronger backed by the risk-related sentiment and comments from US authorities. Investors turned wary after China reported a new, but a small outbreak of coronavirus in Wuhan, where the pandemic started. Fears of a second wave of contagion in Europe and the US surged, as economies begin to ease lockdown measures.

Powell and Trump boost the greenback

Most of the dollar’s strength, however, came from Powell and Trump. The head of the Federal Reserve said that policymakers had not changed their posture on negative rates, dismissing chances of using such a toll. Nevertheless, he reckoned the harsh situation the economy is undergoing due to the pandemic crisis, which added to the sour mood. US President Trump also lifted the greenback by saying that it’s time for a stronger dollar.

The lack of reaction in EUR/USD it’s maybe linked to the ongoing uncertainty about the future. The next two weeks will be critical, as it would be clear whether easing restrictive measures work or not. If the number of new contagions shoots, risk aversion could turn into panic selling, as it will delay any possible recovery to an unknown future.

Dismal data both shores of the Atlantic has been “ignored,” with the pair unable to react to anticipated shocking figures. Inflation in the US contracted in April, while 2.98 million people filed for unemployment in the week ended May 8. Retail Sales plunged 16.4% in April the largest decline on record.  On a positive note, the preliminary estimate of the Michigan Consumer Sentiment Index for May improved to 73.7 from 71.8, beating the market’s expectations of 68.

German’s economy contracted by 2.2% in the three months to March, while the EU Q1 GDP printed -3.2%, slightly better than the -3.3% anticipated, although showing the extent of the damage to economic growth.

The upcoming week will bring the May German ZEW Survey. The Economic Sentiment in the country is seen improving from -91.5 to -77.5, while for the whole Union is expected to have declined to -12.1 from 25.2 previously.  Also, the FOMC will publish the Minutes of its latest meeting.

More relevant, Markit will publish the May preliminary estimates of the Manufacturing PMI and Services PMI for the Union and the US. In general, and considering the slow comeback of economies, the indexes are seen bouncing from record lows, although holding within contraction territory.

While macroeconomic data may continue to fail to trigger an immediate reaction, it will surely help to shape the market’s mood.

On a weekly basis, the risk for the EUR/USD pair remains skewed to the downside, as it has spent these last few days at the lower end of the previous weeks’ range. In the mentioned time-frame, it has continued to develop below a firmly bearish 20 SMA, which retains its bearish slope below the larger ones. Technical indicators remain within negative levels, although lacking evident directional strength.

The pair’s daily chart offers a neutral-to-bearish stance, as, despite multiple attempts to recover above it, it has spent all the week below a mild bearish 20 DMA. The larger moving averages maintain their downward slopes well above the current level. Technical indicators, in the meantime, remain flat around their mid-lines.

The pair continues to met sellers ahead of 1.0900, the immediate resistance area. Should the pair advance above it, the advance could extend towards 1.0980, with the next resistance at 1.104. To the downside, buyers are aligned in the 1.0760/90 price zone, with a clear break below it opening the door for a retest of the yearly low at 1.0635. 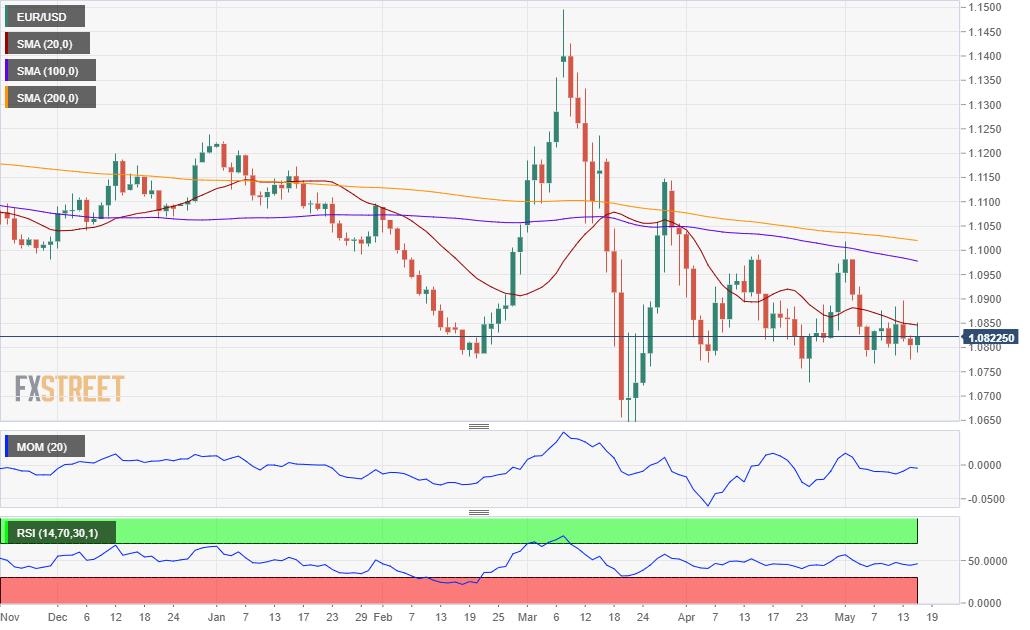 The FXStreet Forecast Poll shows that investors are willing to sell the pair in the short-term, but are reluctant to maintain such stance in time. Bears account for a majority of 63% in the weekly chart but fall to just 29% in the monthly view when bulls surge to 43%. Buyers also dominate the quarterly perspective, although the pair is on average, seen below 1.0900.

As for the Overview chart, the moving averages in the three time-frame under study offer bearish slopes, although with the bearish strength diluting as time goes by, rather indicating the ongoing uncertainty than suggesting sellers giving up.

Bitcoin Weekly Forecast: BTC/USD may retest $7,500 before another bullish run towards $10,000