The  EUR/USD pair hit 1.1733, its highest in 4 weeks, but trimmed its early weekly gains amid a run to safety triggered by the collapse of the Argentinean Peso and the Turkish Lira, later exacerbated by escalating trade war concerns.

Why would those two EM currencies hit the financial market so much? Because of their high levels of foreign debt in hard currencies, increasing protectionism measures and tighter rates. Repaying a debt when interest rates are 0.0% or even negative, is not the same that paying them at a 2.0% or higher when you are talking about thousands of millions.

In the trade war front, the US President has said that he backs applying tariffs on up to $200B worth of Chinese goods as soon as next week, while trade talks with Canada, so the country could join the US-Mexico deal, reached the deadline without an agreement.

The EUR surged but not on self-strength, while the USD later recovered, also lacking self-attractive, which left the pair little changed weekly basis, a handful of pips above the 1.1600 figure.

European data was overall disappointing, as business sentiment in the Union fell for an eighth consecutive month in August, with the European Commission index down to 111.6 from the previous 112.1 and the expected 111.9.  Also, German preliminary inflation for the month came in flat, with the annual reading down to 1.9% vs. the previous 2.1%. For the whole EU, flash August inflation was up 2.0% YoY vs. the previous and the expected 2.1%, while the core reading shrunk to 1.0%.

The US offered more encouraging headlines that anyway weren't enough to offset sentiment-related trading. The second revision of Q2 GDP offered a 4.2% growth rate against the first estimate of 4.1%, while core PCE inflation rose as expected in July, 0.2% MoM and 2.0% YoY.

September will start slow motion, with a holiday in the US due to Labor Day on Monday, but plenty of macroeconomic data the following days to give clues on macroeconomic health. Final Markit PMI for both economies, European Q2 GDP, and the US Nonfarm Payroll report are among the most relevant.

All in one, the dollar should have maintained the lead, if it weren't by increasing doubts about future Fed's monetary policies arose by US President Trump and his criticism of Powell's stance. It could be that the previous weeks' dollar decline has more to do with a due correction, and behavior this week suggests that such correction could be complete and therefore that dollar's bulls are ready to come back.

The weekly chart for the pair shows that it met sellers once reaching a sharply bearish 20 SMA, but also that the pair held above its 100 and 200 SMA. Technical indicators, however, have lost strength and turned flat right below their midlines, indicating that buying interest has somehow decreased.  In the daily chart, the price has briefly surpassed a bearish 100 DMA but finishes the week below it, while the 20 DMA losses the upward strength seen in the previous week. In this last time frame, the Momentum indicator consolidates at overbought readings, but the RSI has already begun correcting lower, currently at 56, also suggesting that buying interest receded.

At this point, the pair plunged and corrected. Whether the correction will continue or the bearish trend will resume, depends on certain key levels: to the upside, the key continues being the 1.1745 region, as the pair stalled multiple times around it during the past  July. A break above it will discourage dollar bulls, and the pair could continue advancing up to 1.1860. Below 1.1550, on the other hand, a retest of the yearly low at 1.1300 becomes more than likely. 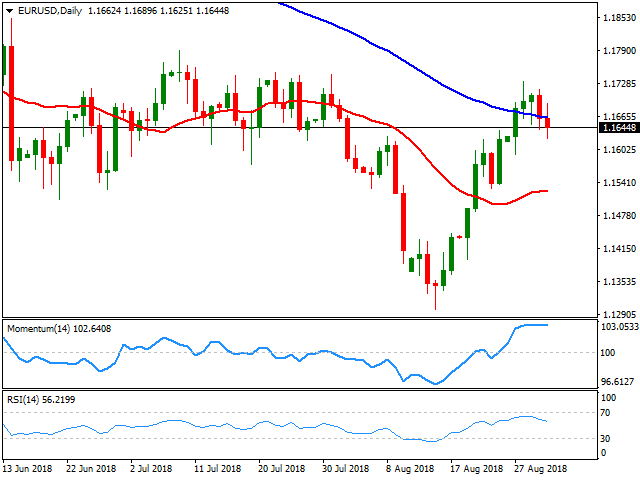 The FXStreet Forecast Poll shows that the sentiment is negative toward the pair, with bears dominating the three time-frame under study, although with limited variations in the average targets. In the weekly perspective, bears jumped from 31% to 60% yet the average target was 1.1613 and is now 1.1602, practically unchanged. In the three-month view, bears decreased from 50% to 40%, while the average target has increased to 1.1658, reflecting the ongoing uncertainty about the ability of the greenback to recover its upward strength.

The moving averages in the overview chart have turned flat in the weekly and monthly views, but in the longer-term perspective, the bullish strength prevails, anticipating that the future of the greenback could become sour. This depends on two main factors: trade war developments, and future the pace of Fed's hikes toward neutral levels.