The US calendar is skimpy this week, with durables on Wednesday, merchandise trade and home sales on Thursday, and GDP on Friday. The New York Fed remains deeply pessimis-tic and has a forecast of a lousy 1.46% as of Friday. The more cheerful Atlanta Fed has 2.7% as of last Wednesday, the same as the week before. At least the Blue Chip consensus has stopped dropping. See the Atlanta Fed chart. 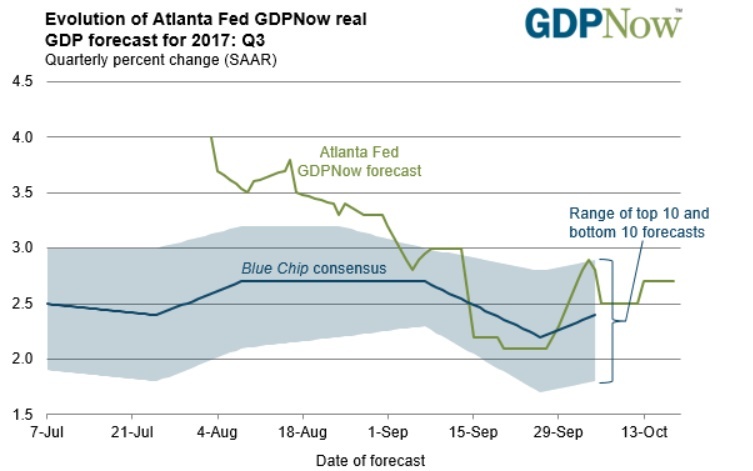 Note that Canada reported CPI on Friday at 0.2% m/m and 1.6% y/y for Sept, considered disappointing, and the BoC policy meeting this week is not likely to deliver any sabre-rattling about rate hikes.

The ECB policy meeting on Thursday is widely expected to deliver a tapering announcement. The ECB is seen as between a rock and a hard place, not wanting to let the QE-fuelled balance sheet get any big-ger but not wanting to declare "job done," either. Draghi has resisted the job-done position, saying sev-eral times inflation is not yet self-sustaining. He may have to walk a tightrope on Thursday, agreeing to cut purchases as much as 50% (to €30 billion per month) while saying full tapering in not a done deal and the ECB can always revert to a higher level of purchases if needed.

Draghi tries to avoid double-talk but he is in an awkward position. Unless he can put up a big barrier, the euro is at risk of overshooting, as several policy board members have noted. A too-strong euro is counter -productive in terms of getting self-sustaining inflation. One big barrier might be a firm commitment to leaving rates the same until some distant future data (like next September). The market already expects QE to persist to at least next September. Draghi can send a signal by changing that number to 12 or 15 months.

We keep expecting the euro to benefit from the tapering announcement, but perhaps it is already fully priced in. In fact, perhaps it was over-priced in and the pullback we are getting now is a preliminary "sell on the news." That could mean that when the actual news comes out, we get one last push to the downside. In other words, the euro already overshot to the upside on the taper story and is now busily overshooting to the downside.

The problem with overshooting is that it can keep going longer and farther than we expect. As noted above, the dollar index is down 4.87% y/y. Let's assume for the moment that a year ago, the dollar was fairly priced. This is never true, but stay with it. A full recovery back to a year ago--pre-election lev-els—implies a dramatic drop in the euro, which is 57% of the index. And traders are holding historical-ly high euro long positions.

See the Commitment of Traders chart (from Oanda). Positions were cut a little in the latest week, to 90,452 contracts from 98,079 the week before, but there is a lot of room for paring positions. At the average price used by the CME (1.1773) for the latest week and €125,000 per contract, those 90,452 contracts are worth $13.3 billion. But every penny of it is speculative. Whether paring harms the price much depends in large part on how fast it is.

Cue the bear. If trader flee the euro at quick-pace, it scares the crowd. A sharp, sudden rise in down-ward momentum is a signal to many traders that it's time to get out of Dodge. A more moderate pace leaves room for argument. We say charting the path to normalization at the ECB is a far bigger deal than the doubtful proposition that the US will get real tax reform and/or tax cut stimulus, but the bond market doesn't necessarily see it that way.

The Pimco letter today says "It's easy to get lulled into complacency by synchronized global growth, easy financial conditions and super-low economic and financial market volatility. Yet, while the current macro environment and outlook appear better than many of the younger market participants can re-member, the last time a similar combination prevailed was in 2006 – and that didn't end well." Pimco is not forecasting a crash or even doom-and-gloom, but warning that "Apart from the obvious geopolit-ical threat emanating from North Korea, the most important macro uncertainties – "the ABCs of cau-tion" – are the aging U.S. economic expansion, the coming end of central bank balance sheet expan-sion, and China's political and economic course following the party congress."

For the US, Pimco sees GDP growth at a below-consensus 2% or less, and core CPI inflation picking up to 2% in the course of 2018. For Europe, growth will be over the consensus 2% but "the euro's ap-preciation suggest that core inflation will make only moderate progress toward the ECB's target" (2%). It's the inflation outlook that counts. If the US is going to get over-target while the eurozone gets under-target but the under-target is due entirely to the favored too-strong euro, doesn't that imply the euro "should" fall? Not if it's preferred for non-economic reasons. Draghi has a real problem on his hands.