US stocks wavered as the earning season as corporate consolidation continued. Dow Jones futures dropped by 54 points while those tied to the S&P 500 and Nasdaq 100 declined by 0.20% and 0.30%, respectively. This happened after companies like Progressive, UnitedHealth Group, and Morgan Stanley released relatively strong quarterly results. Later today, companies like Charles Schwab, State Street, and Kansas City Southern will publish their results. Meanwhile, investors reacted to the ongoing wave of M&A. Overnight, it was revealed that Intel was in talks to buy GlobalFoundries in a deal valued at more than $30 billion. This is an attempt for Intel to become a leading player in manufacturing chips for other companies. If the deal goes well, Intel will become a competitor to Taiwan Semiconductor. Global Foundries was spun off from AMD in 20008.

The New Zealand dollar was mixed in early trading after the latest inflation data. According to the statistics agency, New Zealand’s headline consumer price index rose from 0.8% in the first quarter to 1.3% in Q2. This increase was better than the median estimate of 0.8%. As a result, the prices rose from 1.5% to 3.3% on a year-on-year basis. The number was significantly higher than the median estimate of 2.8%. The strong inflation numbers came two days after the RBNZ left interest rates unchanged and decided to end its asset purchases later this month.

The US dollar was little changed during the American session ahead of the latest retail sales numbers. Economists expect the data to show that the headline retail sales declined by 0.4% in June after falling by 1.3% in the previous month. Core retail sales are expected to increase by 0,4%. These numbers are important because they measure the health of consumer spending. Household consumption is the biggest contributor to the US GDP. Other top things to watch for today are the Bank of Japan (BOJ) interest rate decision, European car registrations, and inflation numbers.

The AUDNZD pair has been under pressure this week. The pair declined sharply after the latest RBNZ decision. It then formed a bearish flag pattern yesterday and dipped again today after the New Zealand inflation data. It declined to 1.0560. By so doing, it moved below the important support at 1.0598, which was the lowest level since May 27. It moved below the short and longer-term moving averages while the Relative Strength Index (RSI) is hovering above the oversold level of 30. Therefore, the pair may keep falling amid a hawkish RBNZ. 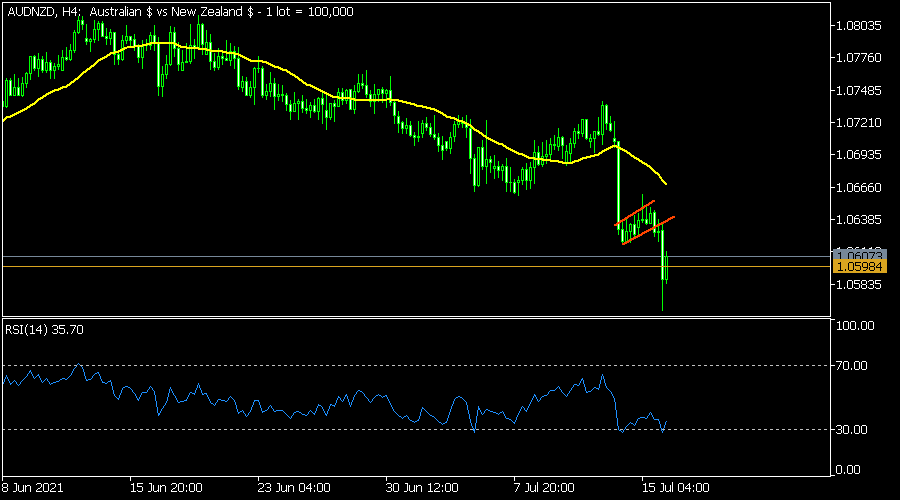 The EURUSD pair declined to a low of 1.1793 during the overnight session. On the four-hour chart, the pair moved below the upper side of the descending channel. It also moved below the 25-day moving average while the DeMarker indicator has moved slightly above the oversold level. The pair will likely remain in this range ahead and after the latest Eurozone inflation and US retail sales numbers.

The Dow Jones index wavered as the earnings season continued. The index is trading at $34,915, which was slightly below the year-to-date high of $35,000. On the four-hour chart, the index has formed what looks like an inverse head and shoulders pattern. It is also being supported by the 25-day and 15-day moving averages. Therefore, the pair will likely keep rising as bulls attempt to move above the resistance at $35,000.