Without looking back, S&P 500 rallied in what feels as a short squeeze in ongoing risk-off environment. Daily rise in yields was not only unable to propel the dollar, but resulted in a much higher upswing in tech than value stocks – and that‘s a little fishy, especially when the long upper knot in VTV is considered.

The post-Fed relief simply took the bears for a little ride, and the Evergrande yuan bond repayment calmed the nerves. As if though the real estate sector was universally healthy – I think copper prices and the BHP stock price tell a different story. Things will still get interested in spite of PBOC moving in. The current macroeconomic environment will be very hard (economically and politically) to tighten into – have you noticed that the Turkish central bank unexpectedly cut rates?

As I have written yesterday:

(…) If June FOMC showed us anything, it was the power of (cheap) talk. We‘ve gone a long way since inflation‘s (getting out of hand) existence was acknowledged – yesterday, we were treated to very aggressive $10-15bn a month taper plans, cushioned with the „may be appropriate“ and Nov time designations. Coupled with the few and far away rate hikes on the dot plot, something fishy appears going on.

While the real economy recovery progress has been acknowledged (how does that tie in with GDP downgrades and other macroeconomic realities I raised in yesterday‘s extensive analysis?), I think that the bar is being set a bit too high.

Almost as if to give a (valid) reason for why not to taper right next. And the theater of taper on-off could go on, otherwise called jawboning, as markets reaction to this fragile phase of the economic recovery (marked by increasing deflationary undercurrents as shown by declining Treasury yields and contagion risks – make no mistake, Evergrande is the tip of the iceberg, real estate has been heating up over the last 1+ year around the world, and in the U.S. we have BlackRock mopping up residential real estate supply, underpinning high real estate prices especially when measured against income). Don‘t forget the weak non-farm payrolls either when it comes to the list of excuses to choose from.

At the same time, we have not been entertained by the debt ceiling drama nearly enough yet. Right, the Fed is projecting the aura of independence, which made a Sep decision all the more unlikely. And who says we‘re short of drama these days?

Given the S&P 500 sectoral performance and not exactly stellar market breadth, this is the time to be cautious, if you‘re a bull. Precious metals haven‘t yet caught the safe haven bid, but aren‘t decisively declining either. Dialing back the risk in stocks makes select commodities more vulnerable – copper more so than oil or natural gas, and cryptos are a chapter in its own right. 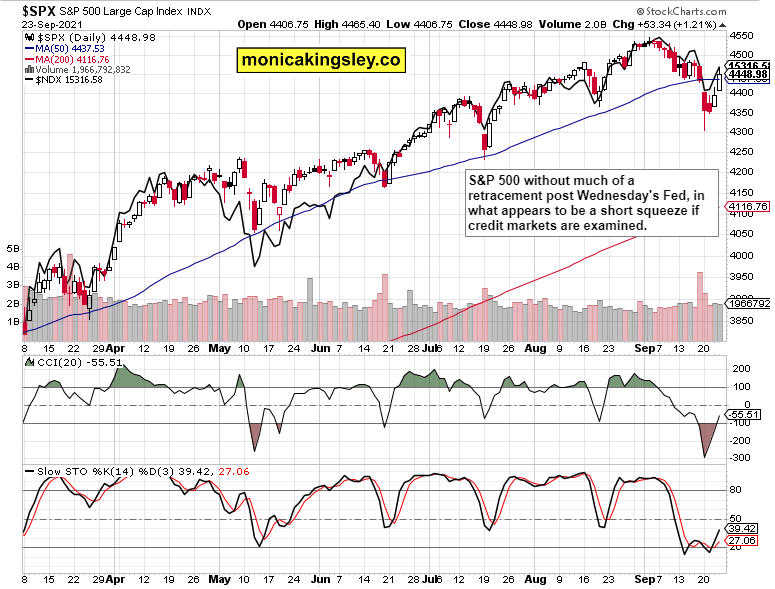 The bulls closed yesterday on a strong note, but the upswing was arguably a bit too steep on a very short-term basis.

High yield corporate bonds giving up their intraday gains coupled with rising yields in quality debt instruments, that‘s not entirely a picture of strength in the credit markets.

Gold declined on the no Fed taper celebrations, and the sectoral weakness is concentrated in the miners. When it comes to silver, the white metal would be influenced by the copper woes – look for good news on the red metal front before expecting the same for silver, that‘s the short-term assessment. 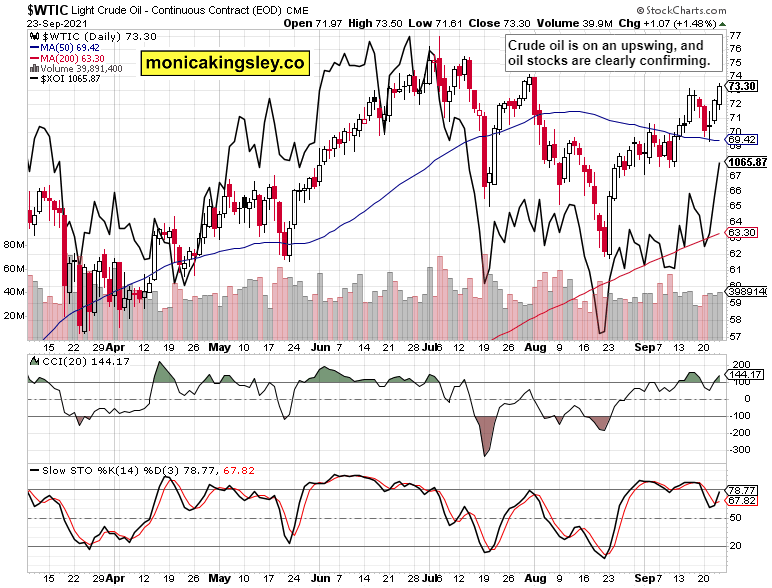 Oil stocks performance lends credibility to the oil upswing, and black gold‘s chart is still bullish – energies are likely to do well even if any CRB hiccups occur. 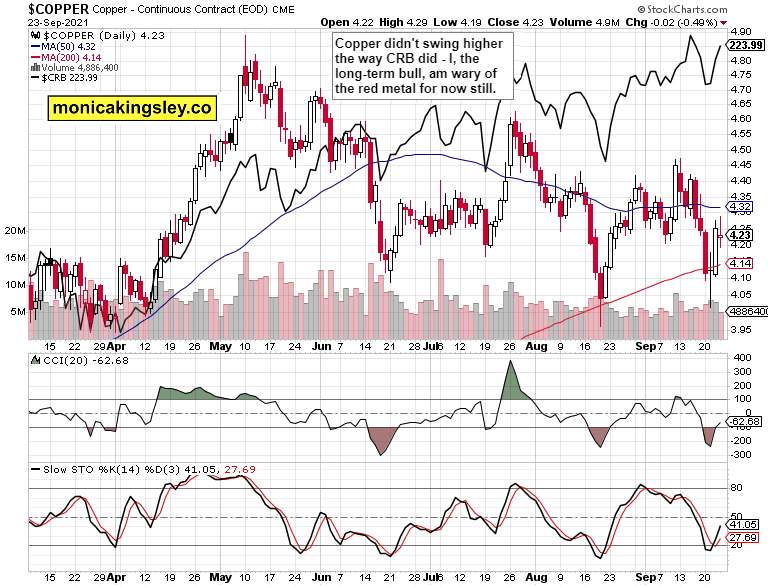 Copper hesitation is back, and both the bulls and bears are waiting as shown by the low volume. The bears have the advantage here. 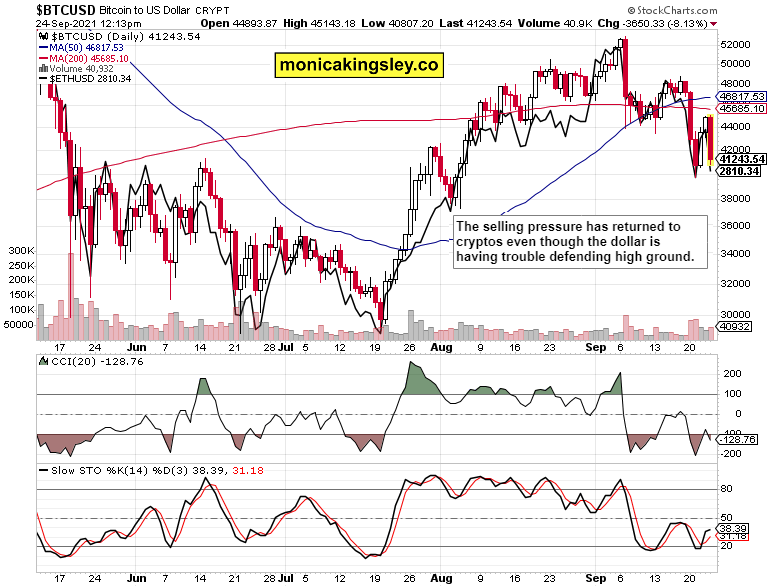 Bitcoin and Ethereum are suffering on renewed China headlines about cracking on crypto trading. The bears haven‘t gained full traction, though.

Yesterday‘s risk-on turn is likely to get questioned, with one day delay – revealing that it‘s not about the Fed setting a tad unrealistic taper pace and conditions. With no fresh stimulus coming, financial assets are facing a fiscal cliff in their own right, that‘s the big picture conclusion, which should temper the bullish appetite across many an asset class.