Cost-push inflation occurs when production expenses rise or the supply of a good falls in the face of inelastic demand. The result is higher prices as manufacturers attempt to recoup their higher costs and supply restrictions induce consumers to pay more for the same goods.

In the modern globally sourced production era, cost-push inflation has been relatively rare. Global markets have put severe restrictions on the ability of any firm to raise prices without losing sales or for workers organizations to press successfully for wage increases.

Demand for many goods is inelastic, that is consumer purchases are not affected by price changes.

In the United States a good example is gasoline. When fuel costs rise, as they have in the past year, families and businesses do not drive less, they simply use a larger percentage of their budgets to pay for the gasoline.

In standard economic analysis there are specific conditions that create this relatively rare cost-push inflation phenomena. Unfortunately for the consumer, three of these five conditions have been fostered by the pandemic of the past 19 months.

We will look at the situations that have, historically, permitted this accretion of pricing power to companies. We will then assess the particular circumstance of the pandemic lockdowns and subsequent restrictions.

The classic example of an exertion of monopoly pricing power was the 1973 Organization of Petroleum Exporting Countries (OPEC) restriction of sales to nations that supported Israel in its war that year with Egypt and Syria.

At the time Middle Eastern oil exporters, especially Saudi Arabia, were the chief swing producers for the global market. When they limited production and sales, there was no ready supply replacement. Petroleum prices quadrupled, adding to global inflation.

The resulting exacerbation of inflation in the United States led, a few years later, to the appointment of Paul Volker to the Federal Reserve. The targeting and successful taming of rampant price increases by the Fed, eventually became a steady reduction of inflation for the next four decades.

An even sharper spike in oil prices in2007 and 2008 had minimal long-term effect on inflation because of its short duration and it collapsed into the demand destruction of the financial crisis.

Natural catastrophes can demolish or restrict raw material or component production. This happened after the Pacific earthquake and tsunami in Japan that closed many Japanese factories in 2011, restricting the supply of automobile components. It occurred to US Gulf Coast oil refineries when Hurricanes Katrina in 2005 and Ida this year, closed production, sending US gas prices soaring.

Natural disasters tend to have an intense but limited impact. Production is generally restored in short order.

In certain circumstances, unions have amassed sufficient control over an industry to force manufacturers to accede to their wage demands. The standard case is the US auto industry’s collective bargaining agreements and targeted strikes by the United Auto Workers Union (UAW), in the decades after the Second World War.

The decline of union membership in the US and the move of many factories to China, has greatly diminished or destroyed union power in most industries.

The most heavily unionized sector in the US economy is government workers. Many of the conditions that led to exaggerated wage increases and restrictive work rules in the automobile industry and helped to bring about its bankruptcy in the 2008 financial crisis have been imitated in government contracts.

Taxes and regulation can add to production costs, restrict supply or both. In the United States, the government mandate for a specific amount of ethanol produced from corn, in all gasoline, which was originally in response to the OPEC oil embargo, has become a fixed and politically impossible to remove cost for consumers. The initial imposition increased food prices as oil refiners competed for a limited supply of corn with food processors.

A recent example is the Biden administration’s closing of federal land to new oil drilling and fracking leases. Crude oil prices began to rise the day before the 2020 presidential election,  as the market began to factor in the policies of the incoming administration.

The fall in value or deliberate devaluation of a national currency can raise prices as imported goods and services become more expensive. As most currencies are traded against the US dollar and global commodities are priced in dollars, a decline in the value of a nation's currency can have serious cost implications for consumers.

The lockdowns around the world last spring wreaked havoc with the global supply chain and national labor markets. Neither have recovered their full capacity.

In many ways the adoption of just-in-time sourcing for raw materials and components over the past three decades, eschewing stockpiles for a continual stream of inputs, has made the current problem worse.

Once the supply chain was disrupted, and availability for crucial components or material became limited, there was no excess capacity to rebuild an operating margin or to stockpile material for a future surge in demand.

International shipping is overtaxed with rates more than doubling from before the pandemic. 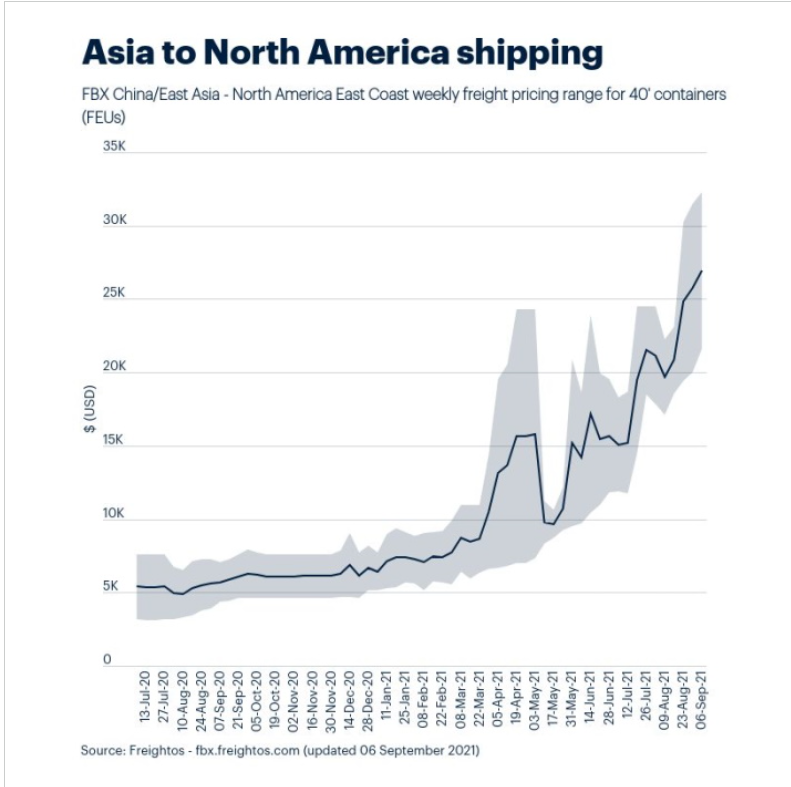 In a similar fashion, many workers have been reluctant to return to work. The logic is likely a combination of overly generous unemployment benefits and lingering viral induced fear. The result is that in the United States  nearly 11 million jobs are going begging and staffing restrictions are inhibiting recovery of production and services. The difficulty in finding workers in many fields has led to proffered wage increases as companies struggle to increase production.

Demand has not just remained stable, as required in economic theory, but in many cases and for many goods, it has gone up. Consumers have tried to make up for purchases deferred during the closures or sought to replace items all at once, concentrating several months or years of buying in a short period of time.

Finally, the Federal Reserve and central banks around the world have poured trillions of dollars into the global economy. Asset price inflation is evident in the equity, housing and credit markets. The liquidity flood and monetarist inflation has also reached consumer prices.

The artificial economic restraints imposed by the pandemic lockdowns have reduced global production and kept many workers from their jobs. Product scarcity has induced price increases and the lack of employees has driven up wages.

Supply chain disruptions and shipping constraints appear to be much more serious and long-lasting than initially expected. Worker reluctance is also proving harder to overcome with simple monetary inducement.

Production, labor and product scarcity will last well into next year, providing a continual backing for higher prices abetted by the continual flood of economic support liquidity.

Central banks have been extremely hesitant to remove the economic crutch of zero (effectively) rates. The Fed has yet to commence its long-promised taper.

American PCE inflation, the Fed’s preferred gauge, rose at a 4.2% annual pace in the year to August. That is the fastest increase in 30 years.

Consumer prices in the CPI index were an even hotter 5.3% in August. The Producer Price Index (PPI)  jumped 8.3% to the year, a thirteen year record, ensuring that the prices pipeline will chock full of increase in the months and perhaps years ahead.

Federal Reserve Chair Jerome Powell and bank officials have contended for months that they expect the inflation surge in the US to be transitory.

It is now obvious the word has a usefully elastic definition.

“It’s frustrating to see the supply chain problems not getting better, in fact they are probably getting worse,” Mr. Powell observed in a virtual discussion with other central bankers. “It’s very difficult to say how big the effects will be in the meantime and how long they will last.”