American consumers are never far from the center of economic gravity. With inflation ravaging family budgets, COVID threatening another round of restrictions and the holiday season here, the outlook of everyday Americans matters more than a shopping cart full of analysts’ predictions.

The US economy has rebounded smartly from its 2.1% growth in the third quarter with the latest Atlanta Fed GDPNow estimate at an 8.6% annualized expansion. If consumers maintain their recent spending despite some of the worst sentiment numbers in a decade, then the economy should weather its current labor market, supply chain, inflation and COVID dislocations. If not, a weakening fourth quarter could be a prelude to an even worse year ahead. 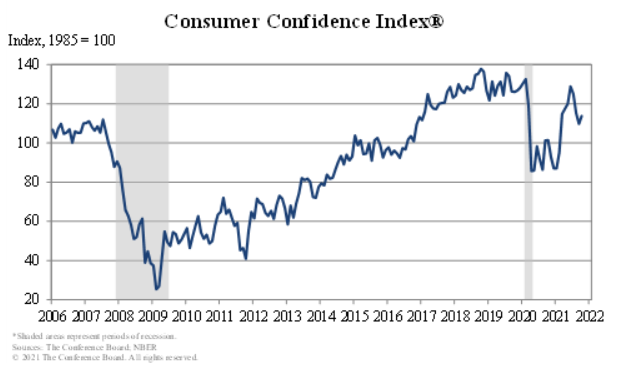 The Michigan Consumer Sentiment Index, released on November 24, dropped to 67.4 in November from 71.7. It was the weakest reading in a decade. The pandemic low was 71.8 in April 2020.

Consumer outlook normally reflects the state of the labor market. Current attitudes are weak despite a near record number of jobs on offer and steadily rising wages. Let’s look at the major factors influencing consumer sentiment.

Nonfarm Payrolls have averaged 646,000 new positions for the last six months. That is the best record since the initial lockdown recovery that began in May 2020. The Job Offerings and Labor Turnover Survey (JOLTS) has had an average of 10.1 million unfilled positions each month since March. The previous all-time record for a single month was 7.6 million in January 2019. Initial Jobless Claims dropped to 199,000 in the week ending November 19. That is the lowest total of new filings in over 50 years, since January 1969. 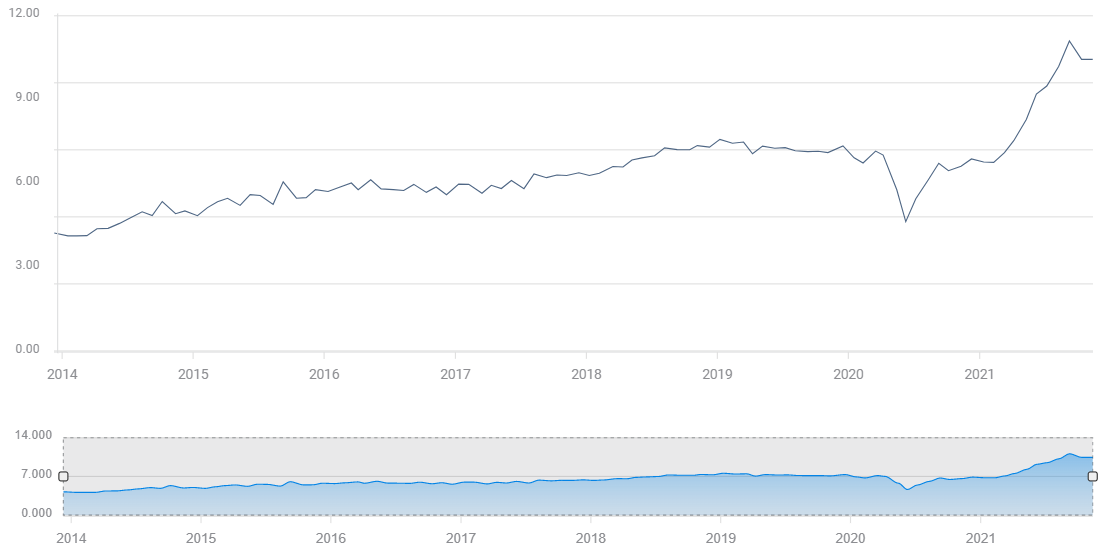 Average Hourly Earnings have risen 3.86% (YoY) for the last half-year with a 4.75% increase for September and October.

The government reported that 4.4 million people left their jobs in October. These so-called voluntary separations, usually for a better-paying position, are indicative of an expansive market and employee confidence.

Jobs are plentiful. Worker reluctance has forced many employers to offer signing bonuses and higher wages. For employees, the pandemic has produced a labor market rife with opportunities. Historically, a labor market with this amount of work available would prompt buoyant consumer sentiment figures.

The biggest problem for consumers is that wages are not keeping pace with rampant inflation. Average Hourly Earnings have produced an annual increase of 3.86% since April. 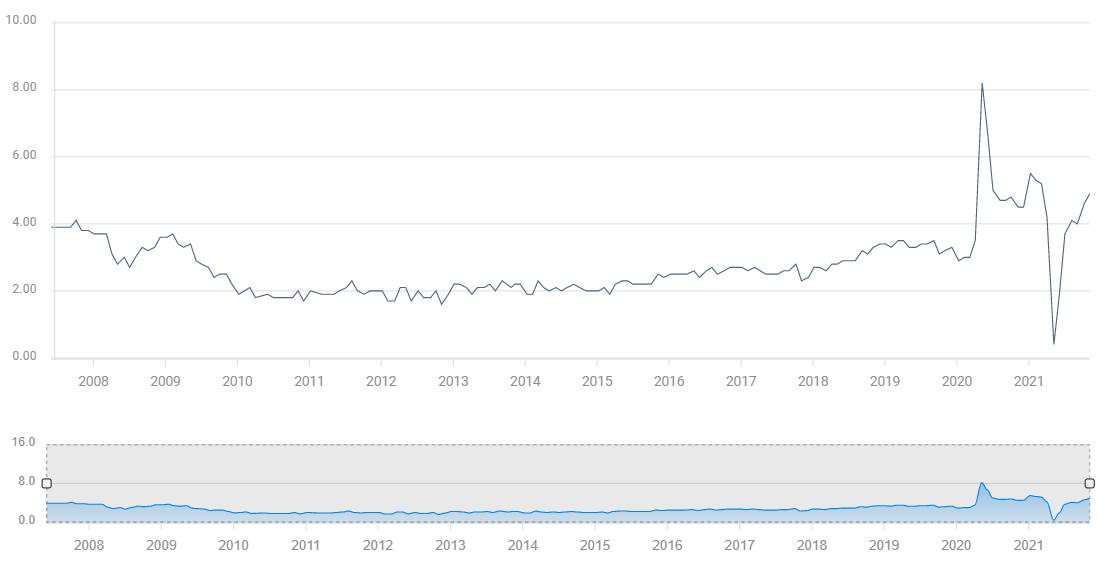 Unfortunately, the Consumer Price Index (CPI) for the same period is 5.45%.

The Personal Consumption Expenditure Price Index, the core version of which is the Fed’s chosen meter, rose 4.3%. Either way, the consumer is losing purchasing power to surging retail prices every month.

First, prices have ballooned in a near record time. Consumer prices have more than quadrupled this year from 1.4% in January to 6.2% in November. In the second half of last year, CPI averaged 1.25% and for almost all of the prior decade CPI was less than 2%. The United States has not seen this rate of inflation in a generation.

Second, the prices of many necessities have risen much faster than the overall inflation rate. Just take one example, gasoline. This inelastic necessity for most American families has jumped 62% in a year. Housing costs, new and used automobiles, meat, poultry, eggs and all forms of energy have advanced more than CPI.

It has not helped that the Federal Reserve, an institution that most Americans still view favorably, has been on the wrong side of the price war. Fed officials from Chair Jerome Powell down have spent the last year reassuring markets, and by extension consumers, that the price increases would be limited and transitory.  Even if for a longer time frame the Fed’s analysis is accurate, the discount of current difficulties is bound to strike many consumers as out of touch and inconsiderate.

Product shortages are more an annoyance than a threat. Most items are available, albeit at considerably higher prices.

Mass lockdowns and jobs losses are not on the horizon in the US even if some European countries have resorted to those policies again.

The Delta-variant did not force any states to order closings though some did advise masking. It appears, at this early stage, that the newest variant, Omicron, will be no more damaging than the past versions of COVID.

Still, the incessant media coverage and the sense of a never-ending crisis, has burdened everyone's optimism. It seems likely that sentiment indexes will not recover until the pandemic is history.

The most direct expression of consumer attitudes is consumption. Americans are unhappy, that is clear from both major surveys, the University of Michigan Consumer Sentiment Index, and the Conference Board Consumer Confidence Index.

These surveys do not make a distinction between unhappiness or optimism and concern.

American have continued to spend liberally. The Michigan Index plunged from 81.2 in July to 70.3 in August and has averaged 70.6 for the months since the fall. Those are some of the lowest readings in over a decade and are comparable to the scores in 2010 and 2011 when the economy was still recovering from the financial crisis.

Despite the evident unhappiness of many Americans as expressed in the confidence and sentiment surveys, consumption has remained strong.

Personal spending has averaged a 0.70% monthly gain for August through November. In comparison, in 2019, the last full year before the pandemic, Personal Spending averaged 0.36% monthly.

In 2019, unemployment was at record lows for much of the year, wages for many workers were rising at the highest pace in a generation and inflation was below 2%.

Yet despite those excellent conditions, with the Michigan Survey averaging 96 for the year, consumers were only about half as active then as in the past four months.

Retail Sales are another comparison.

Consumers are voting with their employment and not with their sentiment.

In the current economy, weak confidence has not curbed consumer spending. Markets will assume that situation continues even if confidence falls more than forecast in November.

Treasury yields and the US dollar will benefit from better than forecast confidence figures and will likely be immune to weaker than expected figures because consumption will be unaffected.

That does not mean the sentiment figures are without risk. Any substantial fall in Consumer Confidence will bring on spending worries. Just when does eroding purchasing power prompt a cut-back in spending?  At what point does the historical correlation of weak confidence and slow consumption reassert itself?

Why are consumers so unhappy despite the booming job market? Inflation is the chief economic concern. Other possibilities are many. Pandemic exhaustion? Pandemic fear? Political and cultural disagreements, crime, schooling, Christmas product shortages? The list of grievances is nearly endless.

For the markets, consumption is all that matters. As long as weak confidence does not predict weak spending, markets can remain oblivious.