American consumers have been grumbling about inflation for the better part of a year but so far families and households have not stopped spending. The possibility that fading consumer sentiment could predict a pullback in consumption is giving markets fits of doubt and insecurity. But sentiment is already so poor that even an increase in outlook warrants no improvement in economic outlook 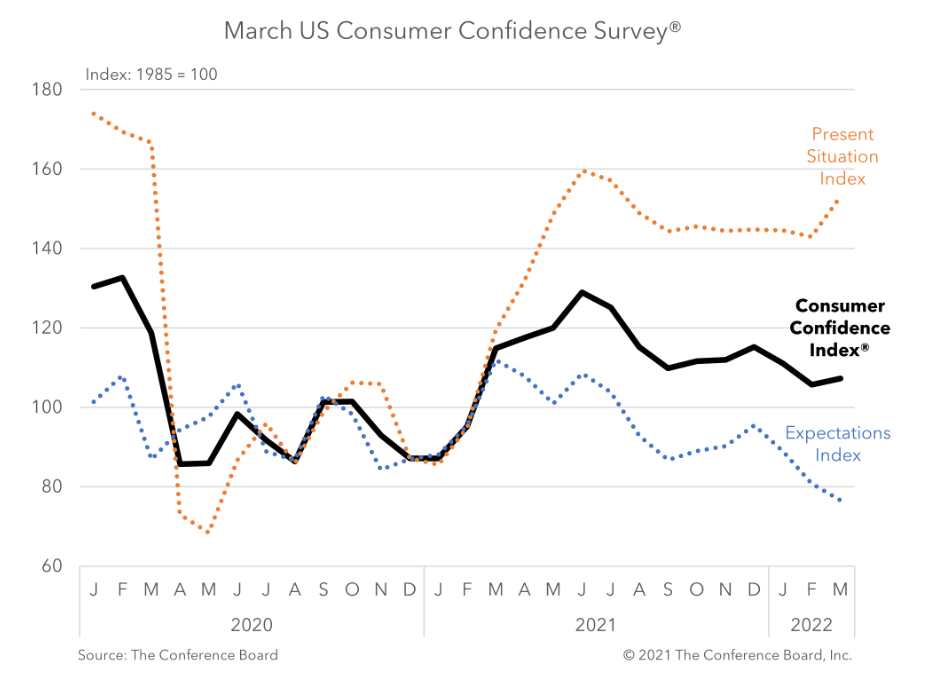 The Michigan Survey was the first to report the erosion in consumer attitudes last summer when August’s reading fell to 70.3 from 81.2 in July. The decline continued to March with the lowest score in 10 months of 59.4. Slippage had been expected to continue into April with a further drop to 59. April’s surprise increase in sentiment to 65.7 was the first rise in four months.

American consumer attitudes have been at a more than 10-year low since the plunge last October. That disappointment has not translated into negative consumption though the inflation-adjusted numbers are considerably weaker than their nominal version.

An important qualification, especially in the current inflation environment, is that neither the sales or PCE figures are corrected for price increases.  Both statistics report on sales volumes, any increase in prices translates into higher consumption figures.

For instance if a car cost $50,000 in February but $60,000 in March, sales and PCE data would list a higher volume of consumption for March when, in reality, nothing had changed.

To correct for this inflationary bias, the Bureau of Economic Analysis  (BEA) publishes an inflation-adjusted PCE series called Real PCE. Its results are strikingly different.

Over the past five months Real PCE  has increased an average of just 0.18% monthly. That is less than one-quarter (23%) of the unadjusted result.

Consumer sentiment numbers are a secondary statistic. They are important for what they may or may not predict about consumption.

In the US, whose economy is heavily dependent on consumer spending, they serve as telltales for Retail Sales and Personal Consumption Expenditures.

The Real PCE numbers paint a much weaker picture of the US consumer than the headline numbers that garner most of the attention.

Inflation adjustment shows that more than three-quarters of the supposed expansion in personal consumption since September has been illusory. The March PCE data will be released by the BEA this Friday April 29 but should show the same effect.

Inflation’s threat to US economic growth is rising by the month. Wages are not keeping pace with price increases. In March, households lost 2.7% of their purchasing power over the previous year.

The anticipated minor gain in March CB Consumer Confidence will not allay market fears that US families are losing their fight with inflation. It will confirm the gathering decline in consumption and the rising fear of recession. A decline in sentiment would exacerbate the recession worries so evident in the equity markets.

Even if sentiment rises more than expected, it is so far from the levels of mid-2021, it will only remind markets of the dismal inflation future and its burgeoning impact.

There is nothing positive to be expected from the April confidence numbers.