The Bank of Japan was first and kept its Policy rate unchanged at -0.10% which was widely expected. Shortly after, the USD/JPY pair rocketed to an intraday high at 145.90 (144.40 yesterday).

The Bank of Japan intervened in the FX market to prevent further Yen weakness against the Dollar. In a little over 40 minutes, the USD/JPY plunged to 140.34, before settling to close at 142.40. It was the first intervention by the Japanese authorities to strengthen the Yen since 1998.

The British Pound (GBP/USD) steadied 1.1260 from its opening at 1.1252 yesterday. Bank of England policymakers unanimously agreed to hike its Official Bank Rate by 75 bps to 2.25%, as was expected.

A popular gauge of the Greenback’s value against a basket of 6 major currencies, the Dollar Index (USD/DXY) rose to an overnight and 20-year high at 111.81 before settling at 111.25.

Against the Asian and Emerging Market currencies, the US Dollar ratcheted higher. The Greenback soared to an all-time high at 81.20 against the Indian Rupee, before settling at 81.05 (79.95 yesterday).

The Bank of Japan’s Annual Core CPI climbed to 1.9% from 1.8%, matching analyst’s expectations.

Eurozone August Consumer Confidence fell to -29 from -25, and median expectations at -26.

USD/JPY – The Dollar Yen had a roller coaster ride, trading in late 80’s volatile fashion. Opening at 144.40 yesterday, the Greenback rocketed to a high at 145.90. This prompted the Bank of Japan to enter the FX market and sell USD/JPY which plunged to 40.34. The Bank of Japan acted alone in their intervention. Japanese markets are closed today (Autumnal Equinox Day). Which is an interesting…

GBP/USD – The British Pound finished little changed against the US Dollar at 1.1262 from yesterday’s open at 1.1253. The Bank of England raised its Official Bank Rate by 50 bps to 2.25%, which was widely expected. Overnight, Sterling hit a high at 1.1364 before dropping to its New York close in volatile trade.

AUD/USD – The Aussie Battler rebounded after the BOJ intervention, soaring to 0.6671 overnight high from yesterday’s 0.6610 opening. The AUD/USD eased to settle at 0.6645 in late New York. Overnight, the Aussie tumbled to a low at 0.6574 in choppy trade.

EUR/USD – The shared currency closed little changed at 0.9837 from 0.9832 yesterday. Overnight, the Euro traded to a high at 0.9907 before slipping to its New York close. The overnight low traded for the EUR/USD pair was at 0.9807 in volatile fashion.

Australia kicked earlier this morning with its September S&P Global Manufacturing PMI which rose to 53.9 from 53.8, beating estimates at 53.2. Australia’s S&P Global Services PMI rose to 50.4 from a previous 50.2 but missing forecasts at 50.8.

Earlier the UK released its September GFK Consumer Confidence which slid to -49 from -44, and lower than median forecasts at -42.

US Federal Reserve President Jerome Powell is scheduled to speak, delivering opening remarks at a Fed Listens event in Washington DC. Traders will be looking out for what he has to say.

Expect another volatile trading session in Asia today. Despite the Japanese official holiday today, the Bank of Japan will be monitoring today’s Yen movements.

As this writer knows from experience, the BOJ has asked its other Asian counterparts (central banks) to watch the Japanese currency.

FX traders will be watching bond yields and their respective moves today. They have been the main driver for the FX. At the end of the day, which is basic FX 101, interest rates and interest rate differentials drive currencies.

USD/JPY – The Dollar has steadied to open in Asia at 142.35. With Japanese markets closed today, traders are hesitant to push the currency until the rest of Asia come in. We could be in for more volatility. Immediate resistance lies at 142.65, 143.05 and 143.65. Immediate support is found at 142.00, 141.70 and 141.20. We could be in for another volatile session in USD/JPY today with a possible trading range of 141.00-144.00. While the trend is still higher for the Dollar/Yen pair, trading on extremes could be profitable. Be quick and nimble. 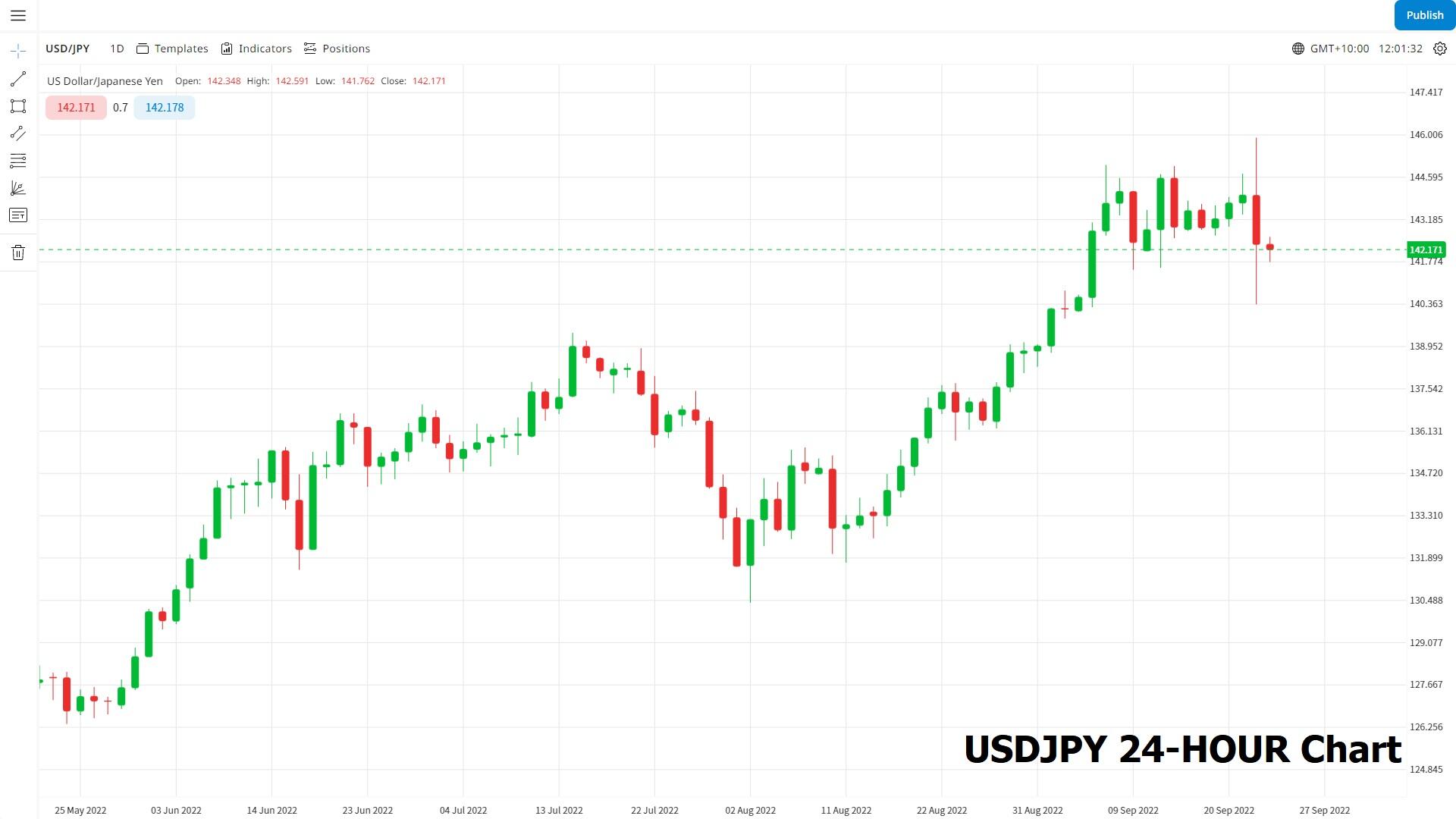 Welcome to Friday in what was a volatile week for FX. With US bond yields on the rise, the interest rate differentials have widened in favour of the Greenback. But we have had some huge moves and it is Friday, which could see a pullback in the making. Keep watching those US bond yields and the differentials today as a guide. Keep those tin helmets on, and get ready to rumble yet again.

EUR/USD is paring back gains towards 0.9900 in early European hours, as German Factory Orders disappointed with -2.4% in August vs. -0.7% expected. The US dollar licks its wounds amid a better market mood. Eurozone data and ECB minutes are awaited.

GBP/USD is reversing towards 1.1300, as investors digest Fitch Ratings downgrade to the UK sovereign ratings amid political and economic woes. The pair shrugs off a risk-on market profile and a broadly subdued US dollar. US data next of note.

Gold price is attempting a bounce as US dollar holds lower ground with yields. Market remains upbeat despite a lack of clarity on the Fed rate hike outlook. XAU/USD eyes $1,735 on a sustained break above the 50 DMA barrier.

Is the recent S&P 500 rally sustainable?

Can we trust the recent rally? The market just rallied +5.7% in two trading days. Bulls argue that the rebound could push even higher as the start of Q3 earnings season starts up next week.