Saudi-led OPEC and its allies agreed to a bigger-than-expected oil-production increase, allowing Riyadh to potentially pump more crude. At the same time, Saudi Arabia agreed to extend a two-month-old cease-fire with Iran-backed Houthi fighters in Yemen, where the kingdom has been entangled in a costly and unpopular seven-year-old war.

Both moves were sought by the U.S. and helped set the stage for Mr. Biden to visit Saudi Arabia later this month as the president looks to set aside longstanding divisions with the kingdom amid high oil and gasoline prices that have driven inflation.

The meeting would also be the culmination of months of diplomatic work by the Biden administration to repair the US-Saudi relationship and would represent a turnabout for Biden, who once suggested that Saudi Arabia be made a "pariah" for its human rights record.

The US President has been highly critical of the Saudis' record on human rights, its war in Yemen and the role its government played in the murder of journalist Jamal Khashoggi.

Biden on Friday defended the prospect of meeting with Prince Mohammed. But even ahead of a formal announcement about the meeting, it has drawn scrutiny, including from Khashoggi's fiancée, Hatice Cengiz.

"President Biden's decision to meet MBS is horribly upsetting to me and supporters of freedom and justice everywhere. President Biden, if he meets MBS, will have lost his moral compass and greatly heightened my grief," she said in a statement to CNN, referring to the crown prince by his initials.

The Biden administration welcomed the "important decision from OPEC+," and highlighted Saudi Arabia's role as the group's largest producer in achieving consensus.

"This announcement accelerates the end of the current quota arrangement that has been in place since July of last year and brings forward the monthly production increase that was previously planned to take place in September," White House Press Secretary Karine Jean-Pierre said in a statement.

The Wall Street Journal reported Tuesday that some members of OPEC were exploring the idea of suspending the OPEC+ supply agreement to allow countries such as Saudi Arabia and the United Arab Emirates to step in and ease a supply crunch that pushed global oil prices above $120 a barrel this week. The Financial Times and Reuters carried similar reports. 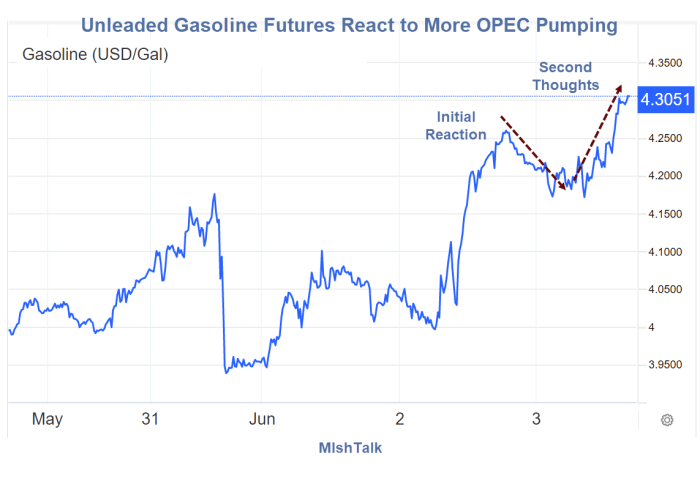 The price of crude and unleaded gasoline futures both dipped on the news of OPEC production increases, but the dip only lasted a matter of hours as the above charts show. 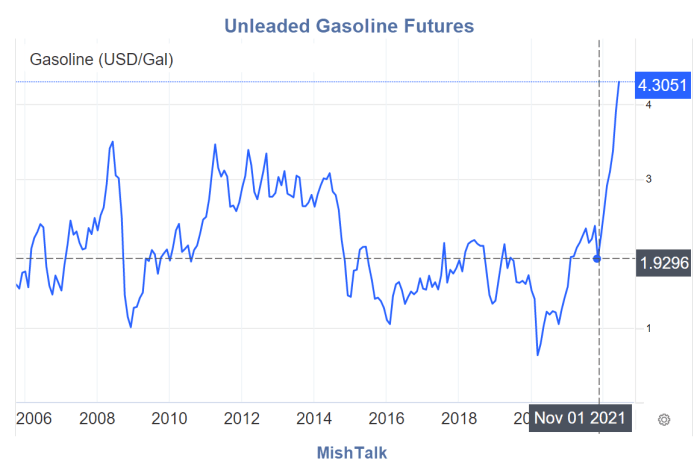 Last Friday marked another record high for unleaded gasoline futures at $4.31 per gallon.

How far behind the curve is the BLS and Fed on rent inflation? 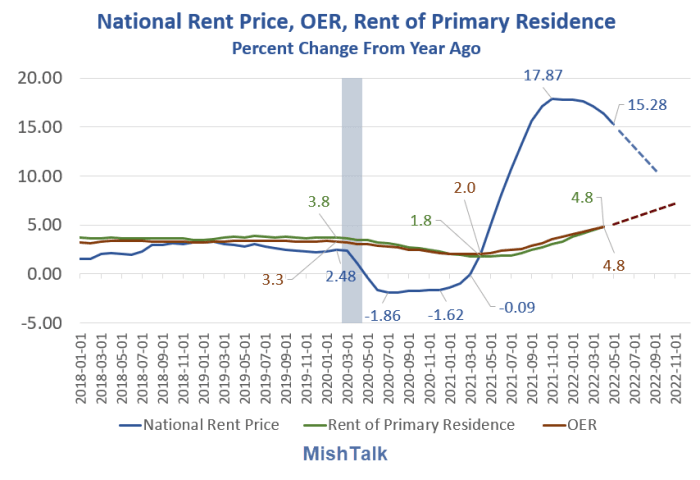 National Rent data from ApartmentList, OER and Primary Residence from the BLS, chart by Mish

Note the pent up pressures on rent prices.

For discussion, please see How Far Behind the Curve is the BLS and Fed on Rent Inflation?