Global stocks started the month on a positive note as investors focused on strong corporate results and the ongoing trend of mergers and acquisitions. According to the Wall Street Journal, deals worth more than $3.3 trillion were announced this year. This is slightly below the $3.5 trillion deals that were announced last year. The latest blockbuster deal was announced on Sunday. In a statement, Square announced that it will acquire Afterpay in an all-stock deal worth more than $29 billion. This will be the biggest takeover of an Australian company ever. Afterpay allows customers to buy products and then pay overtime without interest if they make their payment on time. The buy now, pay later industry has boomed, with Klarna being valued at more than $45 billion.

The Australian dollar retreated slightly after relatively strong economic data from Australia. According to the Australian Industry Group (AIG), Australia’s manufacturing PMI declined from 63.2 in June to 60.8 in July. Similarly, data by Markit showed that the manufacturing PMI declined from 58.6 to 56.9. These numbers show that the manufacturing sector held relatively steady even as the reported new wave of coronavirus affected the country. This is because a PMI reading of 50 and above is a sign that industry did well. The currency will next react to the latest Reserve Bank of Australia (RBA) interest rate decision.

The economic calendar will be relatively muted today. Being the first trading day of the month, the calendar will have the latest manufacturing PMIs by Markit. Economists expect that the PMI remained steady in most countries like the UK, US, and the Eurozone even as the countries went through a new wave of Delta virus. In Germany, the statistics agency will publish the latest retail sales numbers. Economists expect the data to show that retail sales declined by 2.2% in June. Meanwhile, in Switzerland, the statistics agency will publish the latest inflation and retail sales data.

The EURUSD pair was little changed during the Asian session. It is trading at 1.1859, which is slightly below last week’s high of 1.1900. On the four-hour chart, the pair is slightly above the 25-day moving average while the RSI and MACD have started easing. The price is also slightly above the upper side of the falling wedge pattern. Therefore, the stock will likely resume the bullish momentum as traders target the key resistance at 1.1950. 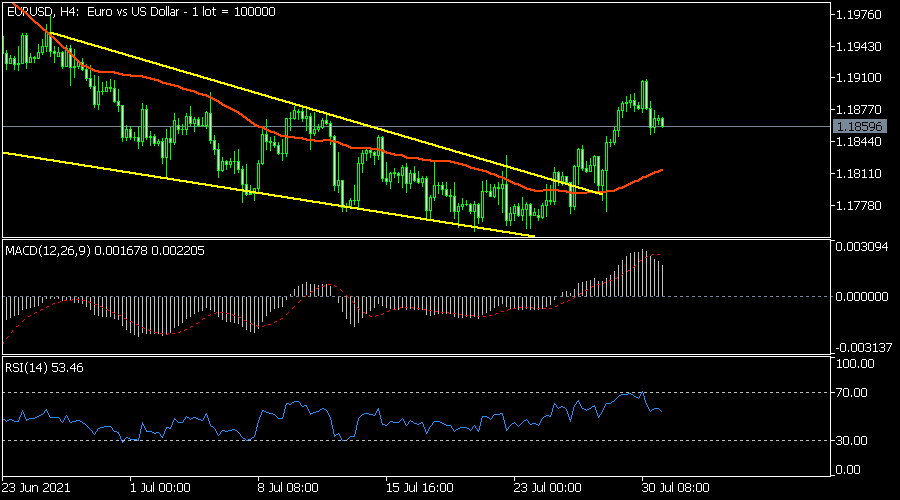 The USDCHF traded at 0.9062 during the Asian session. This price was slightly above last week’s low of 0.9040. On the four-hour chart, the price was slightly above the 61.8% Fibonacci retracement level. It has also moved below the neckline of the double-top pattern at 0.9130. It also declined below the 25-day and 50-day moving averages while the Relative Strength Index (RSI) has been in a downward trend. Therefore, the pair will likely resume the downward trend as traders target the next key support at 0.900.

The SPX500 tilted upwards during the American session as the M&A trend kept rising. The index was trading at $4,413 during the Asian session. This price was slightly below the all-time high of $4,430. On the four-hour chart, the price is slightly above the 25-day moving average. It also seems to be forming a bullish flag pattern while the Relative Strength Index (RSI) is at 56. Therefore, the index will likely break out higher later this week.