The AUD/USD pair is trading around the 0.7300 level, unchanged for a second consecutive week, despite there were quite a few headlines that could have spurred action. Somehow, the lack of action across the FX board reflects a similar behavior among central bankers. This past week was the turn of the US Federal Reserve, which, as widely expected, kept rates at record lows near zero, and formalized the new framework focused on targeting average inflation. And while policymakers left the doors opened for further easing, they showed that they are in no hurry to increase facilities, and instead passed the ball to fiscal authorities.

The Fed’s stance was quite similar to that of the RBA, which met earlier this month. A modestly optimistic upgrade of the economic outlook, covered with a good dose of uncertainty and linked to the pandemic developments. Policymakers from around their world pledged to keep supporting the economy but refrained from making new announcements for the near term.

Political tension in the US, as elections loom, combined with an uneventful Federal Reserve. Equities remained under pressure, although at least US indexes didn’t extend their slumps. Wall Street capped Aussie’s gains, alongside gold prices, which continue to trade at the lower end of their latest range. Gold buyers hit the break as central banks halted the provision of easy money.

Good news in Australia fell short of boosting the Aussie. According to the official release, the country added 111K new jobs in August, while the unemployment rate fell to 6.8%, beating expectations, despite the lockdown in Victoria. In the region, however, 42.4K lost their jobs.

Also, coronavirus cases in the country continued to ease, which lead to a lift to the travel cap for citizens abroad.  “With the success we have had as a country in recent months, we can start opening up again and we can start helping Australians getting home again,” Prime Minister Scott Morrison said this Friday.  The country has reported 48 new cases this Friday, 45 of which are in the mentioned Victoria region. As of today, coronavirus cases in the country total 26,861, with the death toll at 837.

Chinese data released this past week was also upbeat, as Industrial Production increased 5.6% in August, while Retail Sales in the same month rose 0.5%, beating expectations. Yet as it happens globally, macroeconomic figures show that economic activity remains well below pre-pandemic levels.

The upcoming week will be quite light in terms of macroeconomic data, as Australia will only publish the preliminary estimates of the September Commonwealth Bank PMIs. Manufacturing activity is seen falling again into contraction territory, as the index is foreseen at 48.3 from 53.6, while services output is expected to have shrunk further, down from 49 to 48.3.

The US, on the other hand, will see Fed’s chief Powell testifying before the Congress, the September preliminary Markit PMI and August Durable Goods Orders.

The AUD/USD pair retains its long-term bullish potential intact, according to the weekly chart. For a third consecutive week, the pair is above its 200 SMA, while the 20 SMA has crossed above the 100 SMA, both well below the larger one. The RSI indicator keeps consolidating near overbought readings, while the Momentum indicator has picked up within positive levels, after correcting extreme overbought conditions.

Daily basis, the pair has continued developing above a mildly bullish 20 DMA, while the larger ones keep advancing below it. Technical indicators, however, lack directional strength, the Momentum within neutral levels and the RSI around 57. The bearish potential seems quite limited due to price behavior and despite easing indicators.

A relevant support level is 0.7190, followed by the 0.7100 figure. Given the persistent dollar’s weakness, it seems quite unlikely that the pair could fall below this last. Resistances for the upcoming days stand at 0.7350 and 0.7413, the high set this September. 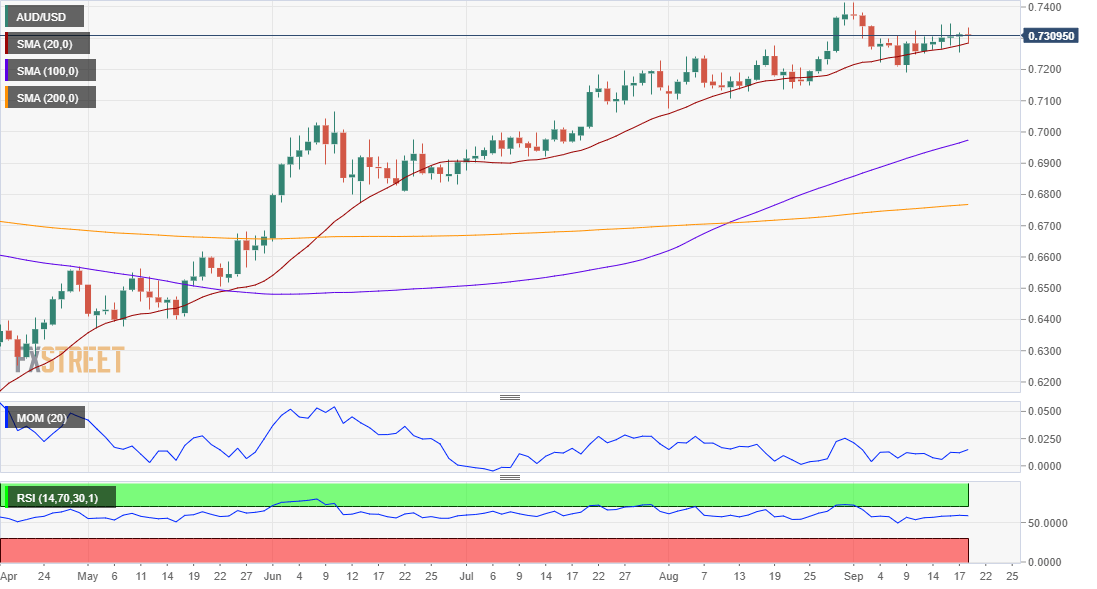 The FXStreet Forecast Poll suggests that bulls hold the grip, as most polled experts see the pair advancing next week with an average target of 0.7322. Buying interest eases in the monthly and quarterly perspectives, as bears are a majority in both cases, although in both cases, the pair is seen around 0.7200 on average.

The Overview chart shows that, while moving averages have lost momentum, the bearish case remains weak as slopes are neutral-to-bullish. It also shows that the number of experts betting for sub-0.7000 levels have continued to decrease, while there’s quite an increase of higher possible targets, in line with an advance towards the 0.75/0.76 price zone.