The AUD/USD pair is trading below the 0.6900 level, having spent the week within familiar levels and finishing it with some modest gains. The Aussie has been quite resilient to the risk-averse sentiment that ruled financial markets these last few days.

Smooth path to recovery, for now

Being an island, Australia is in a privileged situation in regards to the coronavirus pandemic. The situation seems under control in the country, which reported less than 8,000 cases since the pandemic started. The country has been reporting on average 20 cases per day, although it has announced 37 new contagions on Thursday. The number is null compared to the over 40,000 reported by the US but is still double the average. If the trend continues, the Aussie may take the hit, but at the time being, the market is not concerned and enjoying the benefits of a smooth path to recovery.

Governor Lowe helped the Aussie to remain afloat at the beginning of the week, as when participating in a panel said that the local economy is outperforming and that the local currency is not overvalued. He added that interest rates will remain low for the next few years, and warned about the long term effects of coronavirus on the economy. Nevertheless, he was mostly optimistic.

The local currency found additional support in the Commonwealth Bank Flash PMI data as June figures showed a nice comeback. The manufacturing index arrived at 49.8, while services output improved to 53.2. The official report reads: “The June PMIs are consistent with our view that we are now past the low point in economic activity.” US indexes also recovered in June, although market players are waiting for the official figures to be out the next week.

Given that these days, the American dollar’s advances are a result of demand for safety than self dollar’s strength, the AUD/USD pair continues to have a limited bearish slope.

The macroeconomic calendar will be more entertained next week for both economies. Action in Asia will start early Tuesday, with China publishing the official Manufacturing and Non-Manufacturing PMIs for June. Australia will publish its official AIG Manufacturing Index for the same month on Wednesday, while China will publish the Caixin index the same day.

The Australian Trade Balance for May will be out on Thursday, while at the end of the week, the country will publish Retail Sales for the same month. The county and China will publish more growth-related indexes.

The US will publish next Wednesday the FOMC Meeting Minutes and more relevant, the official ISM Manufacturing PMI for June, foreseen at 47.6 from 43.1 in the previous month.

On Thursday and given that the country will be on holiday on Friday, the US will release the June Nonfarm Payroll. The country is expected to have recovered 3 million jobs in June, while the unemployment rate is seen retreating from 13.3% to 12.2%.

The AUD/USD pair is below a bearish 100 SMA in the weekly chart, unable to surpass it since June started. Still, the pair remains above a mild-bullish 20 SMA, as technical indicators hold within positive levels, keeping the risk skewed to the upside.

Daily basis, however, the positive momentum has faded. Technical indicators head firmly lower, still in retreat mode ever since hitting overbought readings at the beginning of June. The price, in the meantime, is a handful of pips below a bullish 20 DMA, and above the larger ones, which lack directional strength over 300 pips below the current level.

The pair still needs to clear the psychological 0.7000 mark to turn bullish, with room them to advance towards fresh yearly highs in the 0.7100 price zone. The first relevant support level is 0.6770, with a break below it favoring a slide towards the 0.6680/90 price zone. 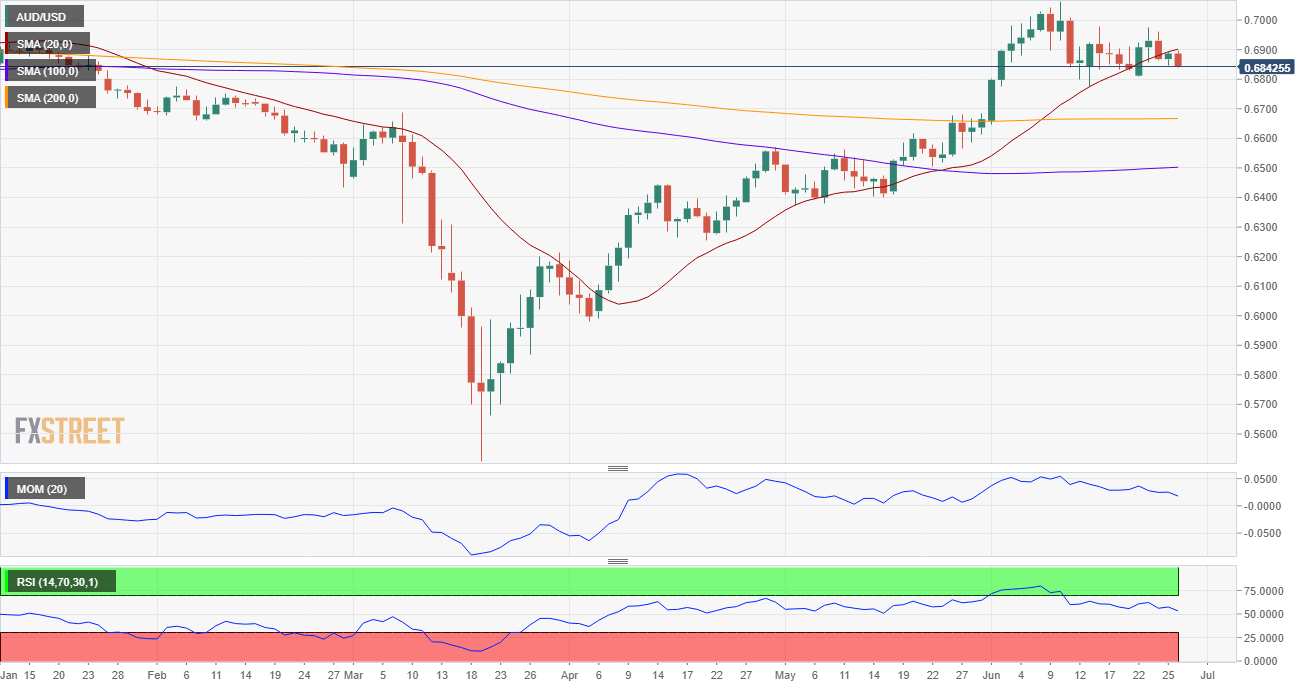 The FXStreet Forecast Poll indicates that market players are betting against the greenback in the short-term, although it favors the American currency in the longer-term perspectives. Banks seem to be the most bearish, seeing the pair below 0.6000, which drags the average lower. However, bears are a majority, with bulls accounting for 23% of the polled experts in the monthly view, and just 10% for the quarterly perspective. Weird enough, just a few traders expect the pair to run beyond 0.7000 in the upcoming weeks.

The Overview chart shows that moving averages remain flat with most investors seeing little action next week. As time goes by the range of possible targets widens, although there are no specific level areas that stand out.

EUR/USD eases below 1.1900 as USD rises with yields, US CPI eyed

EUR/USD is trading under pressure below 1.1900, as the US dollar rebounds in tandem with the Treasury yields amid rising inflation expectations. Europe's covid concerns continue to undermine the euro. German ZEW and US CPI awaited.

GBP/USD is trading below 1.3750 after UK GDP figures for February missed with 0.4% and despite Britain's successful vaccination campaign. The currency pair has been under pressure as the dollar strengthens across the board alongside yields. US inflation is eyed.

XRP price broke out of a bull pennant on April 10, targeting $1.58 If the buying pressure persists, Ripple might surge another 16% to $1.68. The MRI shows the formation of a cycle top on the 12-hour chart, suggesting a move lower.

Weekly outlook: Inflation in the spotlight