The Australian dollar fell to a fresh 2021 low of 0.7288 against the greenback but managed to recover roughly 100 pips ahead of the weekly close. The recovery was directly linked to decreased demand for the American currency as investors moved into high-yielding assets.

Wall Street had its worst 2021 day on Monday but flirted with record highs on Friday, providing support to the aussie. However, the upside was limited by pandemic developments in Australia. The country has put most of its major cities under lockdown, extending restrictions this week. While the number of cases is minimum when compared to that of other countries, macroeconomic data from June and July indicates renewed trouble for the economy. In this scenario, the pair will likely continue to depend on the demand or absence of it for the US dollar.

RBA vs the Fed

The Reserve Bank of Australia published the Minutes of its latest meeting, which showed that policymakers are compromised to maintain supportive monetary conditions, and repeated rates will remain at record lows until employment and inflation reach the desired levels. Australian policymakers remained optimistic about the latest economic developments but are conscious that the latest lockdowns will delay monetary policy’s normalization.

The US economic progress has signalled a slowing pace of comeback, but growth is still there, and the US Federal Reserve is paving the way to tapering. US officials have been utterly cautious on reducing their support, but the first wedge has been introduced when Chief Jerome Powell said that they were “thinking on thinking” about tapering.

The US Federal Reserve is having a monetary policy meeting on Wednesday, July 28, and the focus will be on hints related to the future reduction of the current financial support, the first step toward normalization. No material changes are anticipated for this meeting, although officials will likely anticipate an announcement for September.

What’s next in the calendar

Data-wise, the US macroeconomic calendar will include next week June Durable Goods Orders, foreseen up 2.1% following a 2.3% advance in the previous month. On Thursday, the country will publish the second quarter Gross Domestic Product, foreseen at 7.9%, up from the previous 6.4%. On Friday, the focus will be on June Personal Spending and Income data, which includes the core PCE inflation, the Fed’s favourite inflation measure.

Australia will publish next week inflation data for the second quarter of the year. The annual Consumer Price Index is foreseen at 3.8% from 3.1% previously. Other than that, there won’t be relevant releases in the country.

The bearish trend in the AUD/USD pair is clear in the weekly chart, as the pair continues to achieve lower lows. In the mentioned time frame, the pair approaches its 200 SMA while extending its slump below a bearish 20 SMA. The longer one provides dynamic support at 0.7220. Technical indicators head firmly lower within negative levels, standing at lows previously seen in April.

In the daily chart, the risk is also skewed to the downside. The 20 SMA heads south at around 0.7440 while below the longer moving averages, as technical indicators turned lower within negative levels, although holding above weekly lows. Supports are located at 0.7290 and 0.7220 ahead of the 0.7150 price zone. The first line of sellers stands at 0.7440, ahead of the 0.7500 mark. 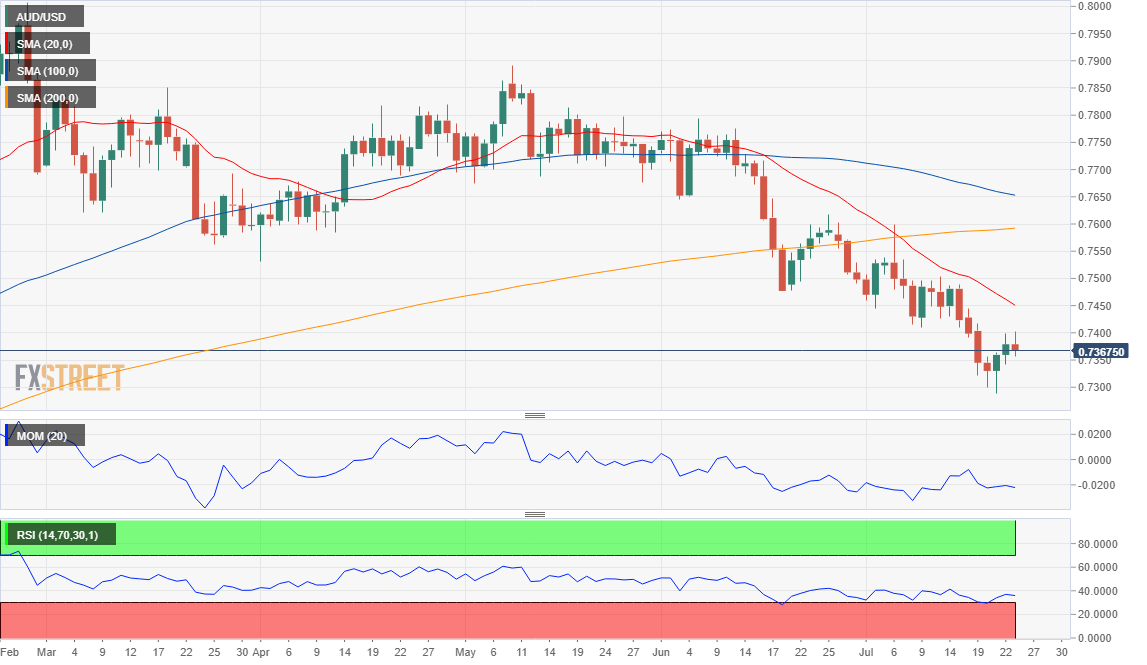 The FXStreet Forecast Poll shows that the pair may be close to an interim bottom. The sentiment is neutral in the weekly perspective and shifts to bullish for the next weeks. Those looking for higher levels account for 80% in the monthly view, and 77% in the quarterly one with the pair seen on average at 0.7588 and 0.7633 respectively.

EUR/USD Weekly Forecast: The ECB disappointed, will the Fed follow such a lead?

USD/JPY Weekly Forecast: Fed decision, covid in the Olympics and yields to shake the pair

Ethereum Classic price shows choppy action as it approaches the lower trendline of an ascending parallel channel. The $52.92 support floor is likely to be tagged before a 40% upswing originates. A decisive close below $48.41 will create a lower low, invaldiating the bullish thesis.