The EUR/USD pair fell for a second consecutive week, reaching a fresh three-month low of 1.1751 and ending the week a handful of pips above the level.  Attempts to recover beyond the 1.1800 figure were quickly reverted by sellers, a sign that bears are in control. Investors sought a catalyst that never came.

The macroeconomic calendar was dull. There was one first-tier event, the European Central Bank monetary policy decision, but fell short of triggering action around the shared currency. The central bank maintained its monetary policy on hold, as widely anticipated. The main refinancing operations, the marginal lending facility and the deposit facility rates remained unchanged at 0.00%, 0.25% and -0.50%, respectively. Policymakers reaffirmed that the PEPP would continue to run significantly faster than at the beginning of the year.

On the long awaited-new forward guidance, the central bank was vague, as well as President Christine Lagarde in her speech. The central bank has agreed a new symmetrical 2% target on inflation after the latest strategy review, and, according to the ECB statement, the Government Council noted that interest rates will remain at present or lower levels “until it sees inflation reaching two per cent well ahead of the end of its projection horizon and durably for the rest of the projection horizon, and it judges that realised progress in underlying inflation is sufficiently advanced.”

On a positive note, President Lagarde added that the economy is on track for strong growth in Q3 but added that the coronavirus Delta variant could dampen the recovery in services while bottlenecks could affect manufacturing in the short term.

Across the pond, US data missed the market’s expectations, fueling speculation that the economic recovery has somehow slowed. Housing-related figures came in worse than anticipated, while Initial Jobless Claims for the week ended July 16 unexpectedly jumped to 419K.

Meanwhile, the number of new coronavirus cases in the US is on the rise, posing a threat to the already slow economic progress and to the Fed, which has shortly ago started “thinking on thinking” about tapering.

The US Federal Reserve is having a monetary policy meeting on Wednesday, July 28. Market participants are anticipating some hints on how officials plan to scale back their easy-money policies. Worth noting that tapering is the first step of normalization, as US policymakers said that they are not likely to consider raising rates until they are done with asset purchases. No changes are anticipated for this meeting, although officials will likely anticipate an announcement for September.

On Friday, IHS Markit published the preliminary estimates of its July PMIs.  In the Union, manufacturing and services output improved by more than anticipated, leaving the EU Composite PMI at 60.6, better than the previous 59.5. In the US, the manufacturing index improved to 63.1, but the services PMI unexpectedly fell to 59.8.

In the upcoming week, the US will provide some relevant hints on economic progress. Ahead of the Federal Reserve’s decision, the country will publish June Durable Goods Orders, foreseen up 2.1% following a 2.3% advance in the previous month. On Thursday, the country will publish the second quarter Gross Domestic Product, foreseen at 7.9%, up from the previous 6.4%. On Friday, the focus will be on June Personal Spending and Income data, which includes the core PCE inflation, the Fed’s favourite inflation measure.

Germany will publish the July IFO Business Climate survey on Monday and the preliminary estimate of July inflation on Thursday. By the end of the week, the country will unveil Q2 GDP, foreseen at -1.5%. The Union will also release its Gross Domestic Product for the second quarter, previously at -0.3% QoQ.

From a technical point of view, the EUR/USD is bearish and poised to complete a 100% retracement of its March/May rally and reach 1.1703. Even further, the pair is developing within a descendant channel coming from June 25 high at 1.1974.

On a weekly basis, technical readings indicate that there is room for further declines. The pair has posted a lower low for a fourth consecutive week, as well as lower highs. The 20 SMA gains bearish momentum far above the current level, while technical indicators maintain their strong bearish slopes within negative levels.

In the daily chart, a bearish 20 SMA converges with the top of the range, while the 100 SMA crossed below the 200 SMA, both far above the current level, in the 1.2000 area. The Momentum indicator stands directionless below its 100 line, while the RSI indicator consolidates near oversold readings, maintaining the risk skewed to the downside.

Supports are located at the weekly low, at 1.1751, and the mentioned 1.1703. Below the latter, the pair has scope to approach the 1.1600 figure, while a weekly close below this last should expose the 1.1470 level, a long-term static support level. 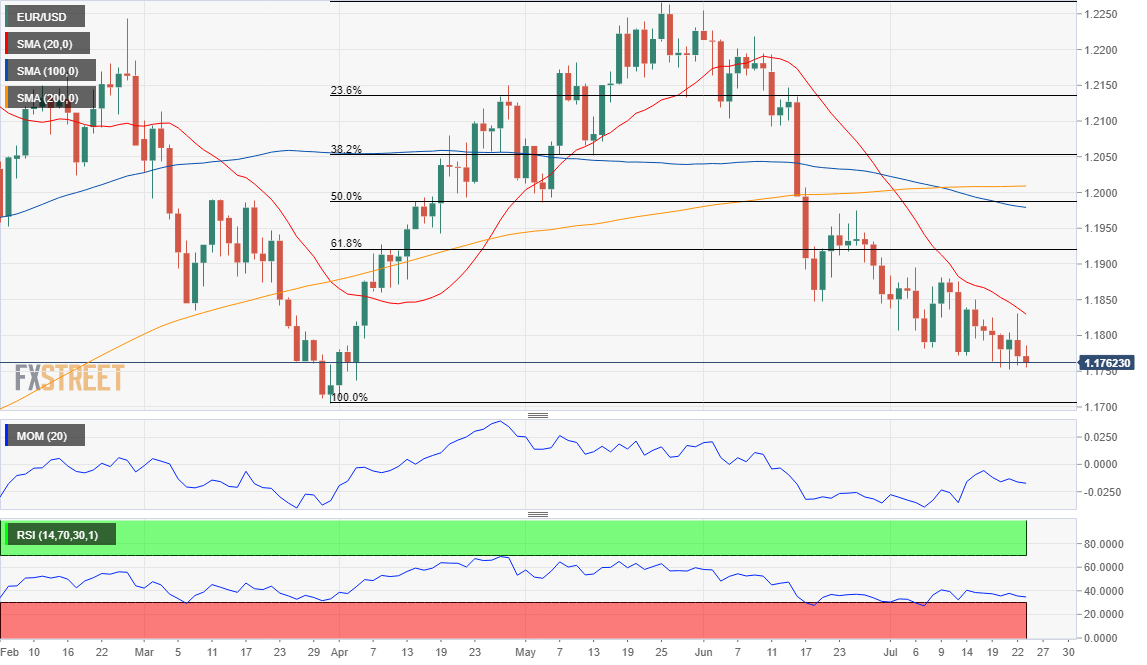 According to the FXStreet Forecast Poll, the EUR/USD pair is poised to extend its decline in the near term, with 55% of the polled experts aiming for lower targets. The sentiment changes in the monthly and quarterly perspective, as bulls are a majority while the number of bears decreases sharply, down to 16% in the quarterly view.

In the Overview chart, the weekly and monthly moving averages maintain their bearish slopes, but the quarterly one has turned bullish, although it would need to advance further to indicate mounting upward pressure. On average, the pair is seen holding below the 1.2000 critical mark, a sign that market participants are still willing to give the dollar a chance.

USD/JPY Weekly Forecast: Fed decision, covid in the Olympics and yields to shake the pair