The AUD/USD pair plunged to 0.7112 on Friday on the back of risk-aversion, bouncing modestly from the level to settle in the 0.7140 price zone. The Australian dollar has been on the back foot against the greenback ever since topping at 0.7555 on October 29, with the first hit by surprisingly high Australian inflation and the latter boosted by speculation the US Federal Reserve could soon announce further tightening on its monetary policy.

Softer gold prices added to the aussie’s broad weakness, as the bright metal plummeted to $1,779.48, its lowest in over three weeks amid continued demand for the greenback. Both the aussie and gold bounced on Friday, although their gains were irrelevant in the wider picture. The bright metal is actually struggling to retain the 1,800 threshold heading into the weekend, and a daily close below the level should put additional pressure on AUD/USD.

Meanwhile, Australia is moving forward into its national reopening plan, as over 86% of the population aged 16 or more has been fully vaccinated. According to Greg Hunt, Australian Minister for Health and Aged Care, the newly discovered coronavirus variant that’s taking its toll on financial markets on Friday would not affect it. However, he said that developments would be closely monitored.

On the other hand, financial markets are suffering big for the new COVID-19 variant, as health officials suspect it could evade the immune response provided by previous contagions or the vaccines. The Dow Jones Industrial Average is down roughly 800 points, while the Nasdaq Composite has shed 200 points so far, preventing AUD/USD from recovering further.

As for the American dollar, the ongoing decline seems so far corrective after it reached overbought conditions against most of its major rivals. At the end of the day, the US Federal Reserve is among the few central banks that have already taken action to reduce facilities. And while it may not be enough for market players, at least it is something that remains far away on the horizon for other central banks.

On the data front, Australia had little to offer these last few days. The country released the preliminary estimates of the November Commonwealth Bank PMIs, with the Manufacturing index standing at 58.2 and the services one at 55. A positive surprise came from Retail Sales that jumped 4.9% in October, much better than anticipated and the result of the economic reopening.

In the US, inflation hit a 30-year high, supporting the case of a tighter monetary policy in the country.  The Gross Domestic Product was upwardly revised from 2% to 2.1% in the third quarter of the year, while the Michigan Consumer Sentiment Index was confirmed at 67.4 in November, better than the preliminary estimate.

Australia is having quite a busy week ahead, as it will publish Q3 Gross Domestic Product, foreseen at 0.5% QoQ, down from 0.7% in the previous quarter. The country will also provide updates on the Trade Balance, the official AIG PMIs,  and housing figures throughout the week. Worth adding that China will publish the NBS PMIs with manufacturing activity expected to remain within contraction levels.

The US will release the official November ISM PMIs and employment figures, as the country will publish the November Nonfarm Payroll report on Friday. The US added 531K new jobs in October, and a similar figure should hint at more action from the Federal Reserve.

The AUD/USD pair fell for a fourth consecutive week, and there are no technical signs of a nearby bottom. The weekly chart shows that the pair has broken below its 100 and 200 SMAs, both converging around 0.7200. The RSI indicator keeps heading firmly lower near oversold readings, while the Momentum indicator lacks clear directional strength at around its midline.

The daily chart suggests that the pair may reach lower lows in the upcoming days, as technical indicators head firmly lower, despite being in oversold levels. At the same time, the 20 SMA has accelerated south after crossing below an also bearish 100 SMA, all of which reflects selling strength.

The pair has bottomed this year at 0.7105, the immediate support level, with a break below it, exposing the 0.700 threshold. Recoveries towards 0.7200 will likely attract sellers, while a steady recovery beyond the latter could see the pair reaching the 0.7270 price zone. 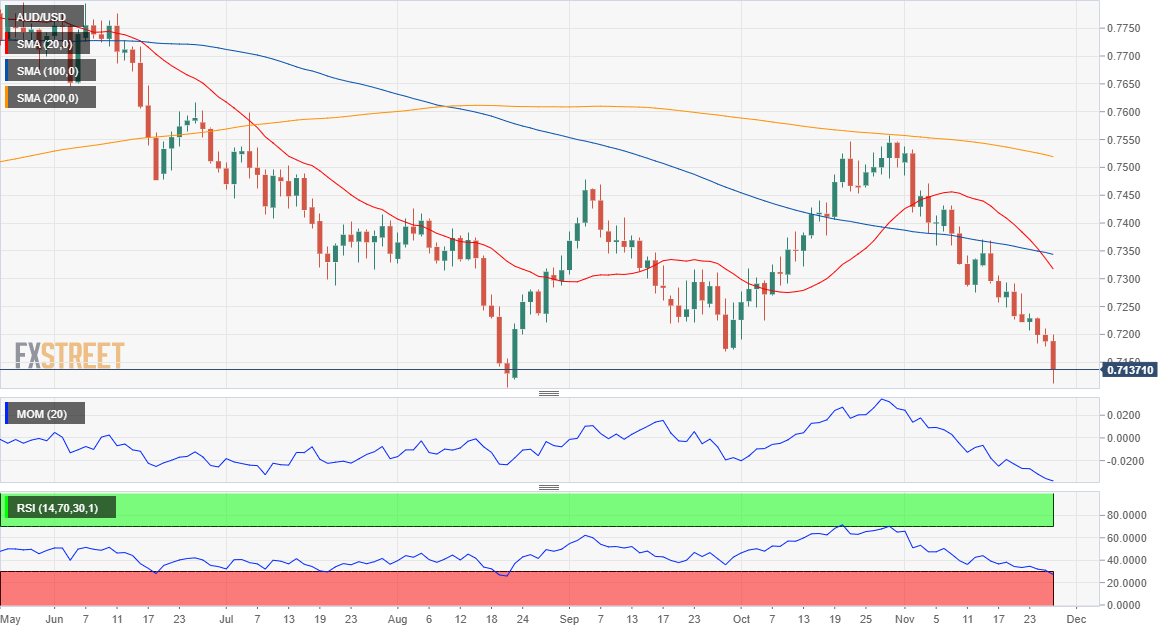 The FXStreet Forecast Poll points at a near-term leg lower before a recovery finally takes place. On average, the pair is seen at 0.7130 next week and around 0.7300 in a month. Bears lead the way in the weekly perspective, while bulls jumped to 78% in the monthly view and bears decline to 18%. The positive momentum eases as time goes by, as the quarterly perspective has an average target of 0.7256.

The Overview chart shows that the weekly moving average maintains a firmly bearish slope, while the longer ones also head lower, although without the near-term momentum. Worth mentioning that, in the quarterly perspective, some of the polled experts see the pair falling below the 0.7000 threshold.