The AUD/USD pair fell for a second consecutive week, hitting 0.7002 this Friday, its lowest since early January. The pair bounced some 50 pips ahead of the weekly close, with the bounce more related to speculative interest cautiousness as the pair tested the critical figure, rather than AUD self-strength. The US NFP report provided a nice excuse, despite it was quite solid, beyond the negative headline. According to the official release, the US just added 20K new jobs in February, the worst reading since September 2017. January number, however, was upwardly revised to 311K from 304K. The unemployment rate declined to 3.8%, nearing a multi-decade low, while average hourly earnings increased more than anticipated, both MoM and YoY.  Higher salaries are good news for the Federal Reserve, which fears inflationary pressures will decrease this year.

The early decline in AUD/USD was triggered by February Chinese trade data, as the trade surplus was of just $4.12B, well below the expected $26.38B. In dollar terms, exports fell 20.7%, while imports were down 5.2%, much worse than anticipated. China's trade surplus with the US narrowed to $14.72B in February from $27.3B in January. Slowing economic progress in the world's second largest economy has been a major drag for the Aussie, as the market keeps digesting the latest RBA decision toward a neutral approach on future rates moves.

But is not only China behind Aussie's decline. The Australian Q4 GDP released this week showed a modest 0.2% growth in the three months to December, with the annual reading printing 2.3% from a previous 2.8%. The decline was attributed to the persistent housing sector downturn and poor consumer spending. Both are far from changing, painting a gloomy picture for the local economy, and therefore, for the AUD.

Meanwhile, there weren't much relevant news correlated to the US-China trade war, with representatives of both economies reporting 'progress' but no deal in the table yet. The latest plunge in Chinese exports is clearly correlated to US tariffs spooking buyers away.

China will release February inflation figures this Saturday, while the next batch of relevant data from the Asian country will be out Thursday, with Retail Sales and Industrial Production. Australian's macroeconomic calendar will be quite light, with Consumer Inflation Expectations being the most relevant release, scheduled for next Thursday.

The pair's bearish potential in the weekly chart remains strong, as it continues developing below the 20 SMA, which stands over 400 pips below the larger ones, while technical indicators extended their declines within negative ground, maintaining their downward slopes at yearly lows. In the daily chart, the technical picture is quite alike, with the 20 SMA gaining downward traction below the larger ones, all of them above the current level. Technical indicators in this last time frame have recovered just modestly from their daily lows but remain within negative levels, far from suggesting downward exhaustion or a steeper recovery. 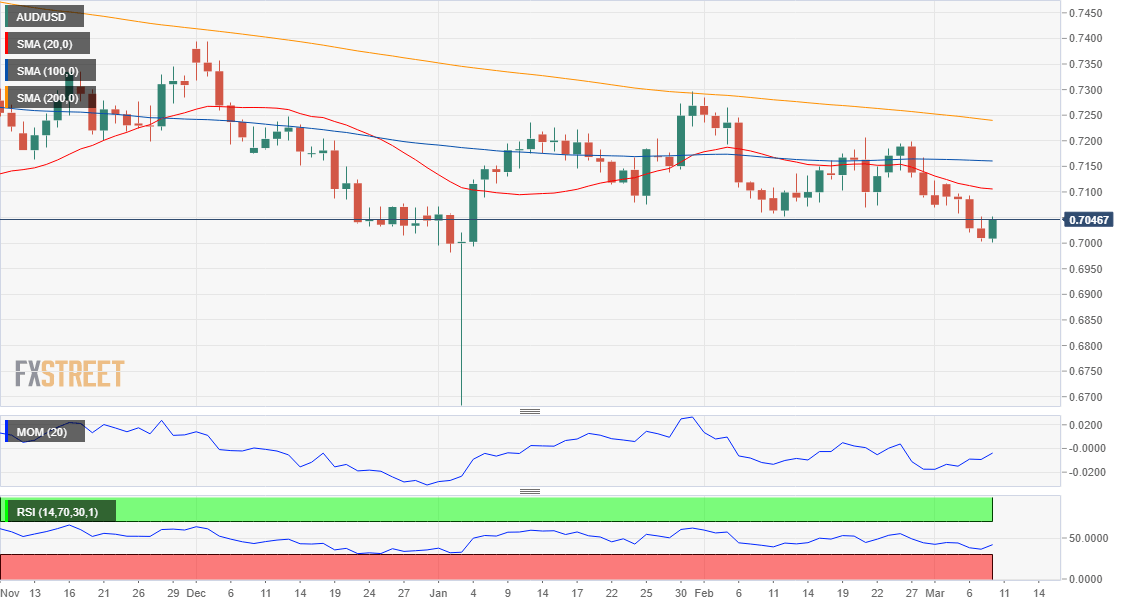 The FXStreet Forecast Poll suggests that the pair may extend its decline next week, with bears accounting for 89% from 55% last week. Bulls become majorities in the 1 and 3 months perspectives, with the quarterly view still pointing to an average target right above the 0.7100 figure.

In the overview chart, the moving average is bearish in the weekly and monthly perspectives. The 3-month moving average shows that the largest accumulation of possible targets comes at around 0.7000, although the dispersion is still high. Nevertheless and despite bulls account a 44% of polled experts, seems the market is thinking of lower lows ahead.

While following a short-term falling trend line resistance, WTI drops to $22.000 amid the early Monday. In doing so, the energy benchmark remains near multi-year low amid the bearish MACD. $20.00 becomes the key for sellers ahead of targeting the three-week-old descending trend line.