The AUD/USD pair moved sideways in a very tight range below the 0.69 on Monday and Tuesday but lost its traction in the second half of the week and now remains on track to post a weekly loss of nearly 100 pips. Disappointing employment data Australia caused investors to start pricing a rate cut by the Reserve Bank of Australia (RBA) in October.

Australian Bureau of Statistics on Thursday reported that the unemployment rate in August ticked up to 5.3% from 5.2%. Although this reading came in line with the market expectation, the underlying details of the report revealed that the number of full-time workers declined by 15,500 following July's increase of 32,000.

Earlier in the week, in the minutes of its September 3rd, 2019 monetary policy meeting, the RBA said that the board would consider further policy easing if needed to support growth and added that it was reasonable to expect an extended period of low interest rates to achieve employment and inflation goals.

Meanwhile, during a joint press conference with Australian Prime Minister Morrison on Friday, US President Donald Trump said that China's increased agricultural purchases would not be enough for an agreement and reiterated that they would like to have a "complete deal." However, Trump also stated that he didn't need to make a deal with China before 2020 Presidential election, making it difficult for trade-sensitive currencies to find demand on hopes of the trade conflict coming to an end next month.

On the other hand, despite the fact that the Federal Open Market Committee (FOMC) on Wednesday announced that it cut its policy rate by 25 basis points in a widely expected decision, FOMC Chairman Powell's neutral tone on the policy outlook allowed the Greenback to preserve its strength against its rivals and caused the pair to push lower. Additionally, Boston Fed President Eric Rosengren argued that cutting rates further would encourage households to take excessive risks and added that additional monetary stimulus was not needed for the US economy. Furthermore, Fed Vice-Chair Clarida explained that this week's rate cut was insurance against downside risks to the outlook.

At the start of the week, the Commonwealth Bank of Australia and the Markit Economics will jointly be publishing the preliminary Services and Manufacturing PMI from Australia, which could intensify rate cut speculations if they arrive below market expectations. On Tuesday, RBA Governor Lowe is scheduled to deliver a speech.

The US economic docket will also feature the Manufacturing and Services PMI on Monday. The final reading of the second-quarter GDP growth on Thursday and Friday's Personal Consumption Expenditures (PCE) Price Index, the Fed's preferred gauge of inflation, will also be looked upon for catalysts.

Technically, the weekly chart suggests that sellers are likely to remain in control with the Relative Strength Index (RSI) edging lower toward the 30 handle. On the same chart, the pair seems to have failed to rise above the 20-week moving average, confirming the bearish outlook.

Looking at the daily chart, the selling pressure becomes more clears with the RSI and the Momentum indicators both pushing lower in the bearish territory. Furthermore, Friday's selloff caused the pair to drop below the 20-day moving average for the first time since September 3.

According to the FXStreet Forecast Poll, the pair could stay indecisive next week but is set to extend its losses on a one-month view. However, the average target for the one month view now around 0.6800, not too far away from the current trading range.

The Overview chart shows many experts see the pair pushing lower toward mid-0.67 and 0.6600 on a monthly, and a three-month view, respectively. 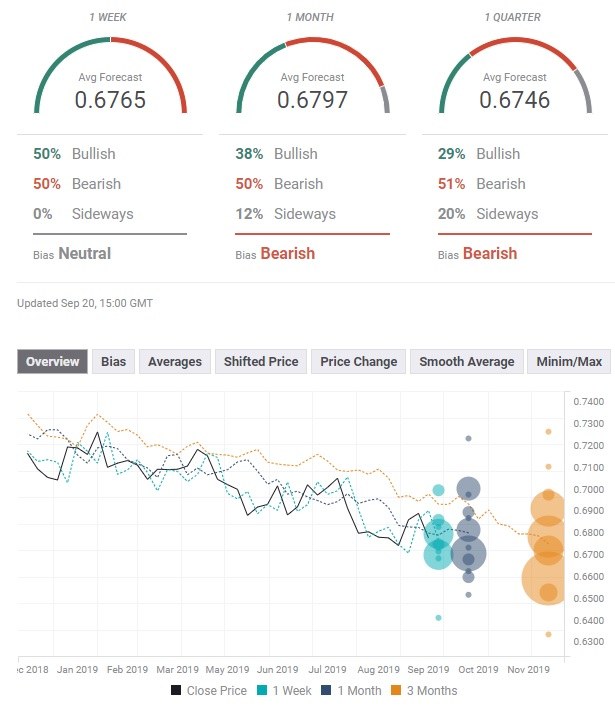