The AUD/USD pair flirted with the 0.7200 level this past week, hitting 0.7205, its highest since late February. However, the upward momentum faded throughout the week, with the pair finishing it with modest losses in the 0.7150 price zone. RBA Meeting's Minutes capped the advance mid-week, as the document showed that most policymakers expect inflation to remain mute for some time. Furthermore, board members said they would favor a rate cut if inflation remains low, somehow confirming speculation that an upcoming rate cut is on the makes. Some market participants are pricing in a rate cut as soon as next May.

Chinese first-tier data surprised to the upside these last days, as according to the National Bureau of Statistics, Chinese Retail Sales were up by 8.7% YoY in March, while Industrial Production expanded by 8.5%, both beating the market's forecasts. Furthermore, Q1 GDP came in at 6.4%, slightly above the 6.3% expected. It Seems China's stimulus measures are giving some results, although analysts still believe that the country's structural economic slowdown will persist.

Australia released this past week the Westpac Leading Index, which improved marginally in March but remained in negative ground for a four consecutive month, somehow anticipating growth will remain below trend in the first half of the year. The country also released much better-than-expected employment figures. In March, the country added 25.7K new jobs, more than doubling the 12.0K expected, while the unemployment rate ticked up to 5.0% as expected, as the participation rate also increased to 65.7%. The recovery in jobs' creation was the result of a jump in full-time positions, up in the month by 48.3K, as part-time employment decreased by 22.6K.

Still, the 0.7200 level remained elusive, partially due to dismal market mood, with equities under pressure due to strong losses in the health-care sector, and partially due to solid US Retail Sales which triggered demand for the greenback, as the numbers indicated solid consumption, lessening concerns about a possible upcoming recession in the world's largest economy.

Australian markets will resume activity next Tuesday, and will also observe a holiday on Thursday, with little local data to take care of. On Wednesday, the country will release Q1 inflation data, seen cooling down from 2018 Q4, a bearish catalyst for Aussie. More relevant will be US data by the end of the week, as the country will release Thursday, March Durable Goods Orders, seen bouncing modestly after February's slump,  while on Friday, the country will reveal   Q1 advanced GDP. Growth is foreseen at 1.8% YoY in the first three months of the year, down from the previous 2.2%.

The AUD/USD pair is ending the week in the red, although posting a higher high and a higher low for a third consecutive one, somehow indicating that the bearish potential is limited. In the weekly chart, the pair has managed to recover above an anyway bearish 20 SMA, settling a  handful of pips above it and still far below bearish 100 and 200 SMA. Technical indicators lost their upward potential and turned south, still stuck to neutral territory.

In the daily chart, the pair remains trapped between directionless moving averages, with the 200 DMA capping the upside and the 100 SMA offering support in case of retracements. Technical indicators have also eased, now losing directional strength just above their midlines. 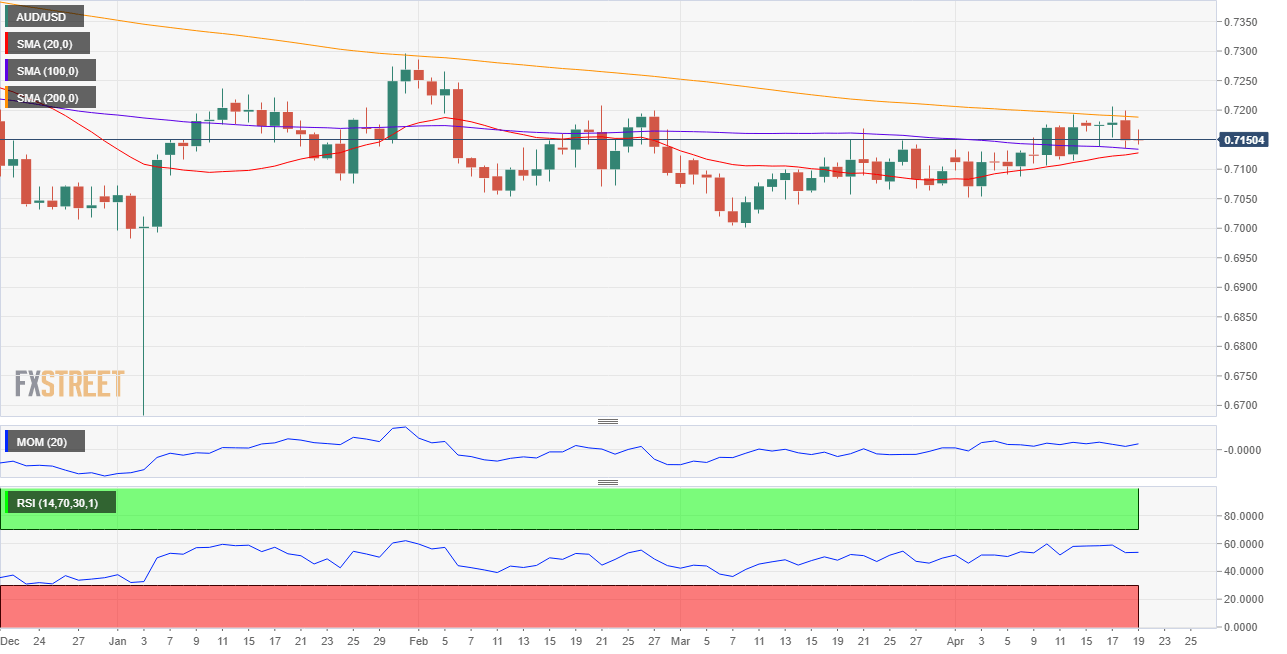