Indecisive market's behavior at the beginning of the week got sort of a definition Thursday, with the EU Markit preliminary PMI for April. The reports indicated that business activity bounced from March's collapse, but not enough. The index for the German's manufacturing sector barely recovered from a multi-year low and remained well into contraction territory. In other countries, the recovery was a bit more encouraging, although far from enough to make the ECB reconsider the need for more stimulus. The EUR/USD pair fell to 1.1225 Thursday, settling at the end of the week, a handful of pips above this last. The decline was further fueled by US Retail Sales, much better than anticipated in March, a sign of robust consumption. US data spooked the ghost of recession, despite  Markit indexes for the US were slightly below the market's forecasts with private sector activity slowing to an over two years' low, dragged mostly by weakness in the services sector in March.

Market kick-started the week in a good mood, backed by positive Chinese data, although there was no follow-through, partially due to an overall cautious stance ahead of Thursday's data, and in the particular case of the shared currency, because of the Bundesbank monthly report, informing that German economic growth picked up only moderately in Q1, with the underlying pace of expansion subdued. On a positive note, the German ZEW survey showed that economic sentiment bounced in April, although the assessment of the current situation indicated that distrust persists.

In general, minor data released this week said that, while the EU's economic slowdown didn't find a bottom yet, the US economy is still in the growth path. Maybe not at the most healthy pace, but growth's there.

In the political front, the US and China had set a tentative timeline of further talks, aiming to sign a deal by the ends of May, or early June. However, once again there was nothing more than encouraging comments from officials.  Brexit is on pause, and by no means closer to a solution. It's just delayed to the end of October. But comments that talks between Corbyn and May stalled, gave the greenback a helping hand these days.

Little impact had on currencies the end of the Muller's investigation on President Trump suspected illegal activity during the campaign. The document reported that the investigation couldn't establish that the Trump campaign conspired with Russia to interfere elections, despite the overwhelming probed contracts between campaign officials and Russian representatives. Furthermore, the report indicated that collusion is not a federal crime. The report didn't paint a nice picture of President Trump and his advisors, but given that there was no probed criminal activity, the greenback remained strong and stocks rose on relief.

The upcoming week has little to offer in terms of European data, with April Consumer Confidence to be out Tuesday, being the most crucial piece of data. Dull trading could persist in the first half of the week, as the US will release Thursday, March Durable Goods Orders, while on Friday, the country will reveal the all relevant Q1 advanced GDP. Growth is foreseen at 1.8% YoY in the first three months of the year, down from the previous 2.2%.

The EUR/USD pair topped at the 50% retracement of its 1.1447/1.1183 decline before resuming its slide and now battles to hold above the 61.8% retracement of such an upward corrective move between the mentioned low of 1.1183 and the high set at 1.1323. Furthermore, the pair remains well below a long-term descendant trend line coming from September 2018 high at 1.1814 and not far above the multi-year low set last March at 1.1175.

In the weekly chart, the pair was unable to advance beyond the 20 and 200 SMA, both converging around 1.1340, while technical indicators continue their neutral-to-bearish consolidation within negative levels, lacking enough directional strength to hint an upcoming move.

Daily basis, the pair is finishing the week below a mild bearish 20 DMA, which accelerated south far below the larger ones. In this timeframe, the Momentum indicator hovers around its 100 level, while the RSI stands at 45, both with modest upward slopes, but also lacking sufficient strength, to anticipate an upcoming advance. The risk, however, remains skewed to the downside. Below the yearly low, the pair has room to extend its decline first toward the 1.1100 figure, while an approach to 1.1000 will be on the cards if 1.11 gives up. The pair would likely bounce sharply if 1.10 is tested, as the market is not yet ready to go behind it. Resistances for the upcoming days come at 1.1280 and the mentioned 1.1340  area, with a recovery above this last anticipating some upward continuation that could extend up to the 1.1460/70 critical resistance area. 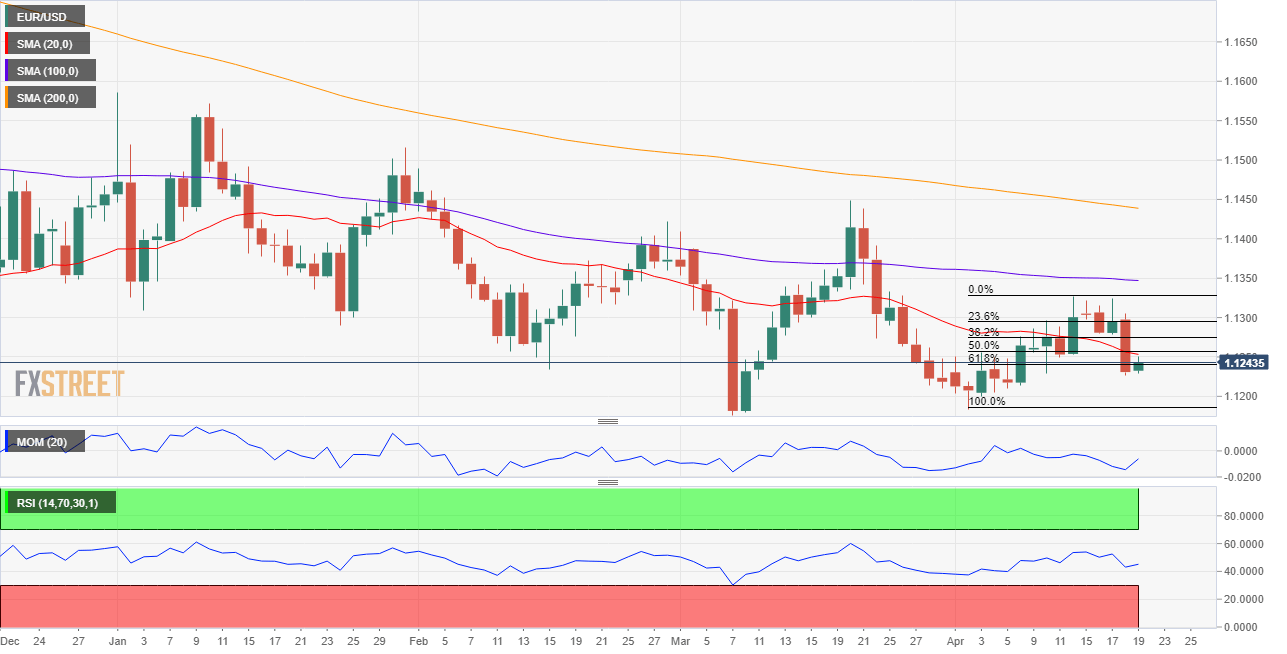 According to the FXStreet Forecast Poll, the downward pressure will persist in the upcoming weeks, as for the 1-week and 1-month perspectives, bears account for 67% and 61% respectively of the polled experts. In the quarterly view, however, bulls become a majority with 49% and as bears decrease to 31%. That said, the average targets n the three timeframes under study are between 1.12 and 1.13, somehow indicating that bullish interest will remain limited.

Furthermore, in the Overview chart, the moving averages offer downward slopes for the three timeframes under study, with a large accumulation of targets below the MA quite notorious in the 1-month view. The spread of possible prices long-term is quite evenly distributed between 1.10 and 1.17, with the moving average showing a softer downward slope, but still heading south.