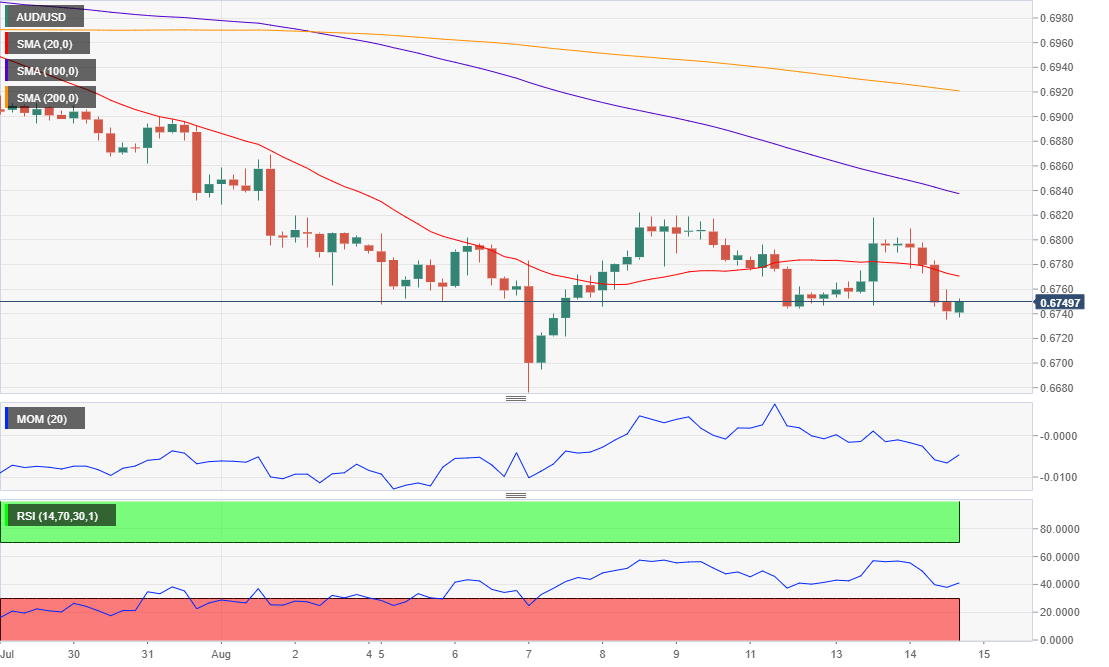 The AUD/USD pair is trading near a fresh one-week low set during the US session at 0.6735, losing ground ever since the day started. China released July Retail Sales, which were up by 7.6% YoY, below the expected 8.6%. Industrial Production in the same period rose by 4.8%, missing the market’s forecast of 5.8%. The disappointment dented demand for the Aussie, despite Australian data was better-than-expected. The Westpac Consumer Confidence improved to 3.6% in August from -4.1% in July, while the Wage Price Index rose by 0.6%, slightly better than the 0.5% expected and previous. The decline was a result of renewed concerns about a US recession sending equities nose-diving. Australia will release August Consumer Inflation Expectations for August, and July employment data. The economy is expected to have added 14.0K new jobs, while the unemployment rate is seen steady at 5.2%. Given the encouraging wages’ data, there is a chance that better-than-expected employment numbers give the AUD a temporary boost.

The risk for the AUD/USD pair remains skewed to the downside, as in the 4 hours chart, the pair retreated below a mild-bearish 20 SMA. Furthermore, the 100 SMA accelerated its decline well above the current level, while technical indicators remain within negative levels. The pair needs to advance and settle the 0.6815 level to have chances of advancing further, while if it loses the 0.6740 support, the next target comes at 0.6676, the multi-year low set early this August.