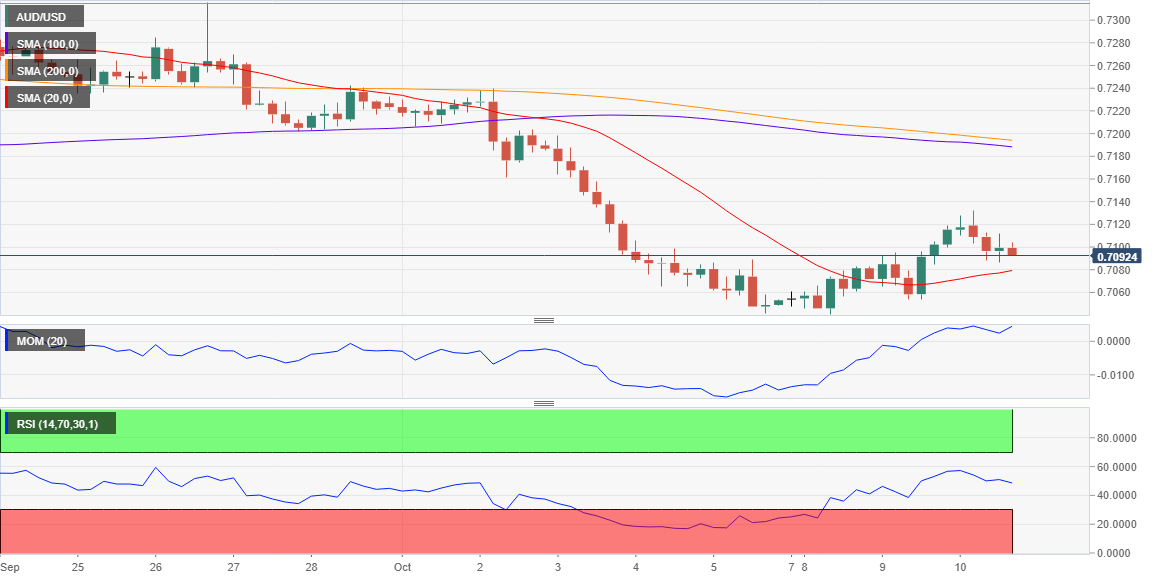 The AUD/USD pair peaked at 0.7129 a weekly high, but was unable to hold on to gains and settled around the 0.7100 level, little changed daily basis. The Aussie found support at the beginning of the day on a positive local figure, as the Westpac Consumer Confidence index surged in October to 101.5, up by 1%, after falling 3.0% in September. The pair eased alongside equities ever since the London session's opening, with the downside limited by broad dollar's weakness despite Wall Street's collapse. Still, given that this last was triggered by renewed trade war concerns, the Aussie may come again under selling pressure. Australia will release the Melbourne Institute Consumer Inflation Expectations report for October, previously at 4.0%, while China will offer some minor money figures.

The pair has posted a third consecutive higher high and a higher low daily basis, which someone offsets the soft tone intraday tone of the Aussie. The pair surpassed the 38.2% retracement of its latest daily slump but quickly retreated below it, and, at the same time, met buyers around the 23.6% retracement of the same slide at 0.7085, now the immediate support. In the  4 hours chart, the 20 SMA offers a bullish slope a handful of pips below the mentioned Fibonacci support, while technical indicators eased within positive levels, rather reflecting the latest retracement than suggesting a downward extension ahead. To the upside, the key is 0.7140, the 50% retracement of the mentioned slide, as gains beyond the level could see it recovering up to the 0.7230/50 price zone.