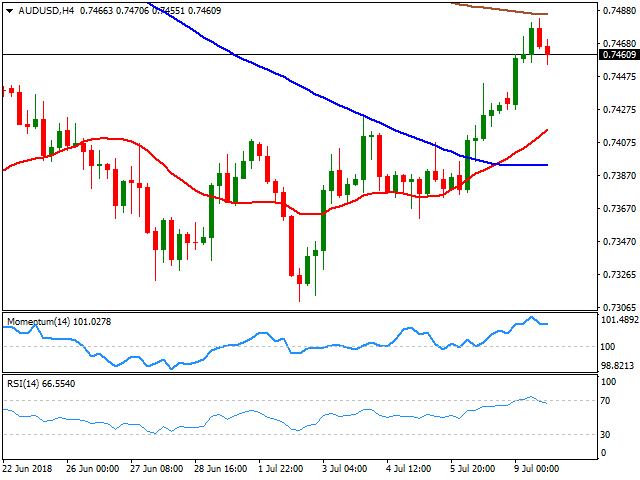 The AUD/USD pair rose to 0.7483, its highest since June 14th, at the beginning of the day, underpinned by a recovery in base metals and broad dollar's weakness. Nevertheless, and despite soaring equities, the pair trimmed most of its daily gains as the dollar found some market's favor after Wall Street's opening, with the pair ending the day a handful of pips above Friday's close but more relevant, with the 0.7440/50 area holding the downside. There were no macroeconomic releases in Australia that could affect the pair early Monday, but the upcoming Asian session will be more lively, as the country will release the NAB's Business Confidence index for June, expected at 8 from the previous 6, and the NAB's Business Conditions index, also seen improving from 15 to 18. Also, China will offer its June inflation figure, seen up YoY 1.9% from the previous 1.8%. The 4 hours chart for the pair shows that it found some intraday sellers around its 200 SMA, but also that it's holding above a bullish 20 SMA which advances above the 100 SMA, suggesting that buyers are still strong. In the same chart, technical indicators have barely retreated from overbought readings before losing their downward slopes, also indicating that the upside remains favored.