Keep America Great or Build Back Better? President Donald Trump is behind Joe Biden in opinion polls yet the race is far from decided – at least not for markets which have been reacting nervously in the last full week before the vote.

While Election Day is November 3, over 90 million Americans – or 65% of the total vote count in 2016 – have already cast their ballots. Many more will be doing so until the polls officially close and the actual voting figures begin dripping in. Traders will likely remain nervous early in the week but volatility is set to explode when real results are announced.

Which states are likely to rock markets? Here are three critical ones to watch.

Every person with a vague knowledge of American political history is aware of the 2000 election – which was decided by a margin of 537 votes in Florida, after a long battle. Moreover, the Sunshine State has seen tight races afterward and went with the winner in the past six elections.

This year is no different, with Trump and Biden neck to neck in opinion polls. What makes the large southern state more special in 2020 is its quick counting. Poll workers in Miami, Orlando, and everywhere else in the state process the ballots as they arrive. They have had their hands busy as over 8 million Floridians have already cast their ballots – 86.6% of the 2016 vote. 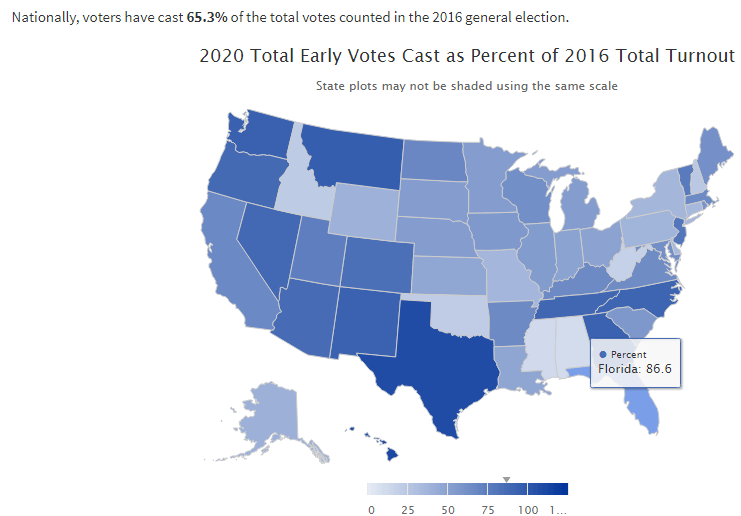 At around 20:30 Eastern on Tuesday / 1:30 GMT on Wednesday, officials are set to begin releasing results, including early and mail-in ballots. Apart from that pre-processing, Florida's counting of election day ballots is also considered rapid. Overall, a critical state that grants 29 electors will be able to provide clarity early on.

Trump won Florida by a margin of 1.2% in 2016 – in line with the state's history. His new home state is considered a "must-win" for the incumbent. If the high turnout means a swing toward Democrats – something that is far from certain – the election is all but over.

A win for Biden in Florida would signal a clear path to the presidency and also higher chances of Democrats flipping the Senate and passing a generous stimulus package – good for gold, stocks (up to a point), and adverse for the dollar.

The current RealClearPolitics average shows Biden ahead with 1.2% – within the margin of error:

2) North Carolina – critical for the Senate

Similar to Florida, North Carolina is a "purple state" – where Barack Obama won one race and lost the second. It went to Trump in 2016 but Biden has a minor lead in 2020.

The Tar Heel State also resembles the Sunshine State with high early turnout – 91.1% of the 2016 total at the time of writing – and relatively quick counting. While the presidential race is of interest, the Senate race is the one to watch for markets.

Republicans have 53 seats in the upper chamber against 47 for Democrats. The GOP is set to flip Alabama, but to lose Colorado, Arizona, and Maine. That would change the standing to 51:49 for Republicans. Dems would need to win one more seat to reach 50:50 – a tie which the Vice-President could break. That would be Kamala Harris if Biden is elected.

The opposition party's best shot is in North Carolina, where incumbent Republican Thom Tillis marginally behind Democratic challenger Cal Cuningham. According to FiveThirtyEight, Cuningham is only "slightly favored" to win:

If the challenger beats the incumbent, it would all but seal a Democratic majority and raise expectations for a large stimulus package. Conversely, if Tillis holds onto his seat, the opposite reaction could be seen. A Republican-controlled Senate would likely play hardball with Biden and limit the next relief package.

For markets, a victory for Tillis would be a worse scenario than a win for President Trump, leading to falls in stocks, gold, and a move higher in the dollar.

3) Pennsylvania – battleground state (including the courts)

Is the Keystone State part of the Northeast or the Midwest? Even that is controversial when talking about Pennsylvania. Trump won the state by less than 1% in 2016 and both campaigns are dedicating significant resources to it.

According to current polling, Biden is set to win neighboring states that the current president surprised with narrow victories last time – Michigan and Wisconsin. If Trump loses these states but wins Florida and the rest of the map remains unchanged, the race goes down to Pennsylvania. It is the most likely tipping point state.

Contrary to the two southern states discussed beforehand, the Keystone State's early voting consists of only 37.3% of the 2016 total vote count. Moreover, processing begins only on the morning of November 3. To top it off, there are ongoing legal battles about the cut-off date in which to accept mail-in ballots – already reaching the Supreme Court.

There is a significant chance that Pennsylvania will initially show an upbeat outcome for Trump – as Republicans tend to vote on election day and these votes will likely be processed quickly. That would create a "red mirage," allowing the president to claim victory.

However., the processing of mail-in ballots – some arriving after Tuesday – would likely trigger a "blue shift," meaning an advantage for Biden. Pennsylvania has a Democratic Governor but a Republican-controlled legislature. Who calls the winner or stops the count? Will it reach the Supreme Court?

The battle in the state, and especially Philadelphia – its biggest city and home to the US constitution – could turn ugly. The nightmare of a contested election would trigger a sell-off in markets, drag gold down and boost the safe-haven dollar.

However, if Trump clearly wins Pennsylvania and is reelected without a constitutional crisis, he could push the GOP to approve a medium-sized stimulus bill that would be satisfactory to markets.

2020 US Elections: Equities in three scenarios

Florida and Pennsylvania are the most critical states to watch – either pointing to a landslide victory for Biden or a contested election. However, there are several additional states that may "steal the show."

State of the race:

Trump lost Nevada by only 2% in 2016 and according to polls, his polling among Hispanics has somewhat improved. That may lead to a surprise flip of the Western state.

Other targets include Minnesota and New Hampshire, two northern states which he also lost narrowly. He is currently trailing in all three. There is always a chance that Trump voters are undetected by pollsters' radars.

See 2020 US Election: Polling, history and the submerged Trump vote

Biden has narrow leads in other states, which may serve as a backup if he loses Florida and Pennsylvania. The first candidate is Arizona, where Hillary Clinton lost by around 5%. Coronavirus hit the state hard in the summer, and the other Senate seat went to the Democrats.

North Carolina and Georgia are also on the radar for the Democratic candidate. Voting in both states has exceeded 90% of the total 2016 turnout and Biden is narrowly ahead in polls there.

Perhaps the biggest shock would come from Texas, a state which is worth 38 electors – second in the nation only to California. The Lone Star state is usually considered "safe Republican" but demographic changes have triggered a tighter contest there. At the time of writing, turnout in Texas is 107% that 2016 – before election day.

Why is early voting a factor favoring Democrats? In the past, Dems voted early but Republicans balanced the picture on election day. The answer is that high turnout means people want change – and that could result in a shock win for Biden in Texas.

At the moment, Trump is leading the large state by 2.3% – below the margin of error, and polls could be overestimating him in 2020 as they underestimated him in 2016.

Florida may give an early victory for Biden  Pennsylvania may give Trump four more years – or trigger contention. North Carolina is the most critical state for the Senate. However, there is room for surprises – and for the elections to drag.

More: How low will markets go? State of play after the covid-related fall, ahead of a huge week