Here is what you need to know on Wednesday, September 15:

Equity markets remain nervous, and Tuesday saw initial optimism fade away by the close. Tuesday saw meme stocks suffer and Apple fail to sparkle after a product launch day. China is once again taking centre stage as the Evergrande saga drags on. For those not familiar, Evergrande is one of China largest property companies and is in trouble financially. Bonds in Evergrande have traded for as low as 30 cents on the dollar, and now China this morning says Evergrande will not pay interest due next week. Most investors had been betting that China was unlikely to let Evergrande go bust due to possible contagion risks on other parts of the economy. That may be getting a bit riskier now with today's announcement.

Meme stocks were also in trouble, and instead of going to the moon, AMC and others fell sharply. Speaking of the moon though, SpaceX is set for its first commercial flight later on Wednesday.

ECB says inflation is transitory, and markets may be overestimating risk from Delta on economic activity.

China informed banks that Evergrande will not meet its September 20 interest payment.

Weber (WEBR) barbeque maker sales rise 19% on strong earnings that see the shares up over 3% in premarket.

Citrix (CTXS) up 4% on sale rumours, according to a Bloomberg report.

Yum China (YUMC) says profits may drop 50-60% because of the Delta variant.

JustEat (GRUB) down in premarket on news Amazon (AMZN) and Deliveroo to partner for free food delivery for UK Prime members.

Kansas City Southern (KSU): Canadian National (CNI) will not increase its bid, according to CNBC. Canadian Pacific (CP) would then be able to finalize the purchase.

Microsoft (MSFT) hikes dividend by 11% and announces a $60 billion buyback.

Lucid Motors (LCID) started as a buy from Bank of America with a $30 price target. 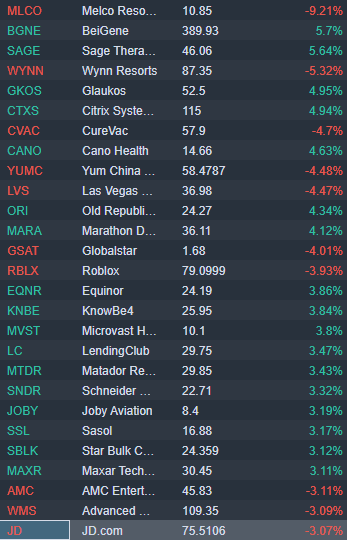