The USD/JPY pair maintained its strong bid tone through the mid-European session and was last seen hovering near the 107.35 region, or the highest level since July 2020.

Sustained US dollar buying, despite a softer tone surrounding the US Treasury bond yields, was seen as one of the key factors driving the USD/JPY pair higher. Bulls seemed rather unaffected by a modest pullback in the equity markets, which tends to underpin demand for the safe-haven Japanese yen.

From a technical perspective, the momentum pushed the USD/JPY pair beyond a resistance marked by the top boundary of an over two-month-old ascending channel. This might be seen as a fresh trigger for bullish traders and might have already set the stage for an extension of the ongoing positive move.

That said, RSI (14) on the daily chart has moved above the 70 mark and points to slightly overbought conditions. This, in turn, warrants some caution before positioning for any further appreciating move ahead of the Fed Chair Jerome Powell's scheduled speech later during the North American session.

Nevertheless, the USD/JPY pair seems poised to prolong the strong momentum further beyond the 107.60 congestion zone and aim to reclaim the 108.00 round-figure mark for the first time since July 2020.

On the flip side, any pullback might now find some support near the trend-channel resistance breakpoint ahead of the 107.00 mark. Further weakness might be seen as a buying opportunity and remain limited near the 106.70-65 horizontal zone, which should now act as a strong base for the USD/JPY pair.

Only a sustained break below will negate the near-term constructive outlook. The USD/JPY pair might then accelerate the corrective slide towards the 106.00 mark en-route the 105.50 confluence support, comprising of the very important 200-day SMA and the lower boundary of the mentioned channel. 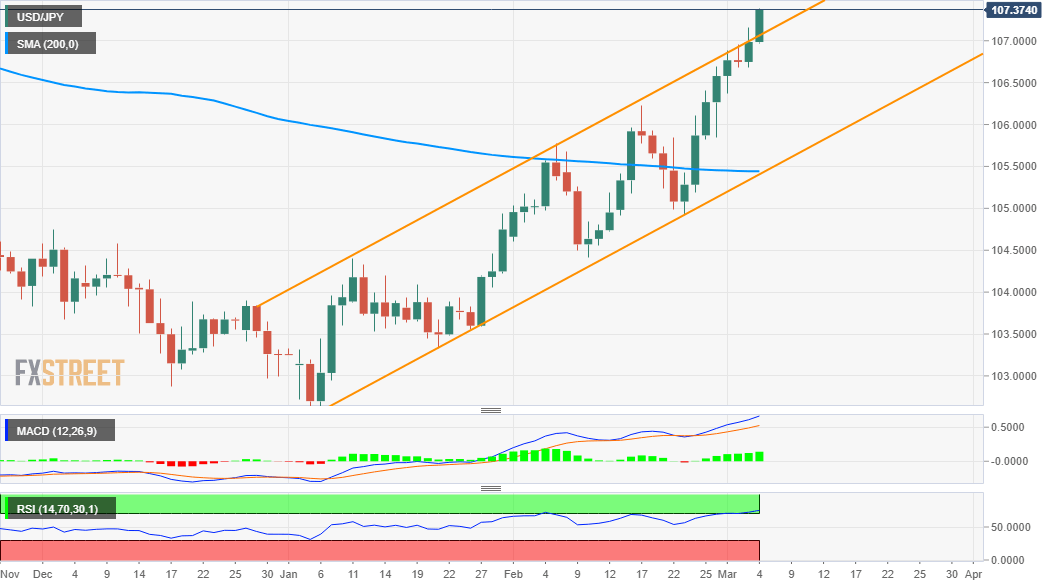 EUR/USD attempts recovery above 1.1950 as US dollar bounce fizzles

GBP/USD recovers to 1.3850, picking up fresh bids heading into the London open. The cheers the UK’s advantage of faster vaccinations and unlock guidelines to shrug off the US dollar’s bounce off late the lowest since late March.