Stock markets continued their broadly positive tone last week with most indices ending in positive territory. The rally struggled for momentum as the week wore on with profit-taking ahead of the long weekend setting in. The major US indices, Dow, S&P and Nasdaq all hit record highs last week as money continued to pour into ETFs. Bank of America reported record ETF inflows of $58.1 billion according to Bloomberg. The alternatives in a negative rate environment are few and with continued records in stocks, it appears that institutional investors are also suffering from FOMO (fear of missing out) trading.

US stock news: Inflation is back

The dollar suffered last week despite inflation concerns inching their way back into traders' minds. US yields had risen last week but doveish comments from multiple Fed officials, mediocre employment data, and further stimulus-related money supply all hit the dollar.

Oil prices continued to strengthen as the equity-induced economic recovery story continues to push commodity prices higher. Energy stocks have been one of the stock market's strongest performers in 2021.

While US CPI last week was reasonably subdued, yields on the US 10 year hit yearly highs Wednesday and again on Friday. Inflation concerns have also started bubbling in other parts of the world with Chinese factory gate prices rising and UK inflation picking up sharply in December.

Central Banks and governments around the world will likely accept some rise in inflation as they look to reboot economies. The Fed has already stated its 2% inflation target is not set in stone.

Inflation data this week will therefore garner more than its usual attention. US PPI on Wednesday will give a lead as to future CPI developments and should be watched closely.

Recent reports from the UK on opening the economy sooner than expected have played into the global recovery theme. Influential members of the Conservative government have demanded a sharp opening of the economy by April. Separately both the US and EU agreed increased vaccine deals with Modena, Pfizer, and AstraZeneca respectively, further aiding hopes for a summer 2021 return to economic normality. While this may seem optimistic investors have little alternative to stocks in the current environment.

This week sees the earnings season slow down but we still have some big names to keep an eye on. Walmart, AIG, Roku, Applied materials, and Deere all announce this week. Travel and Leisure are set to be in focus as the covid wracked industry sees Hilton, Marriott, TripAdvisor, Norwegian Cruise all release earnings this week. Results will understandably be poor and investors will focus on who is managing cash burn and future outlook rather than on past results.

We are still talking about stimulus

Investors are still focusing on just how much stimulus the US government is going to pump into the economy. The dollar has been weakening on the assumption that the figure will largely be higher than expected as Democrats look to go it alone in pursuing a bill through. Initial fears of a watering down of the stimulus to nearer $1 billion to appease Republicans and some Democrats appear to have waned.

Is likely to rage on as representatives from Robinhood, Melvin Capital, and Citadel are to testify before a House Financial Services Committee on Thursday. Gamestop and related retail stocks continue to suffer as the retail trade wears out and switches attention to other sectors, leaving a trail of recriminations in its wake. Other stocks have been taking up the slack left in the Gamestop wake. CCIV has been the subject of retail attention as merger rumours with Lucid Motors continue to swirl on social media.

Noted Earnings for the week ahead 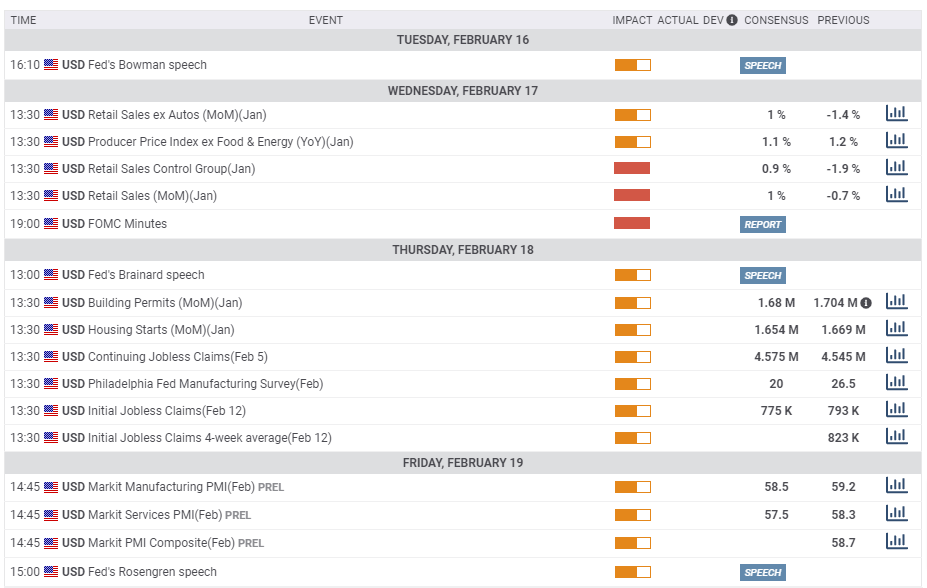 On the longer-term chart, you can see the significance of this 3198 support, holding the bullish trend from the March 2020 lows in place. The RSI is trending lower but not in overbought range. 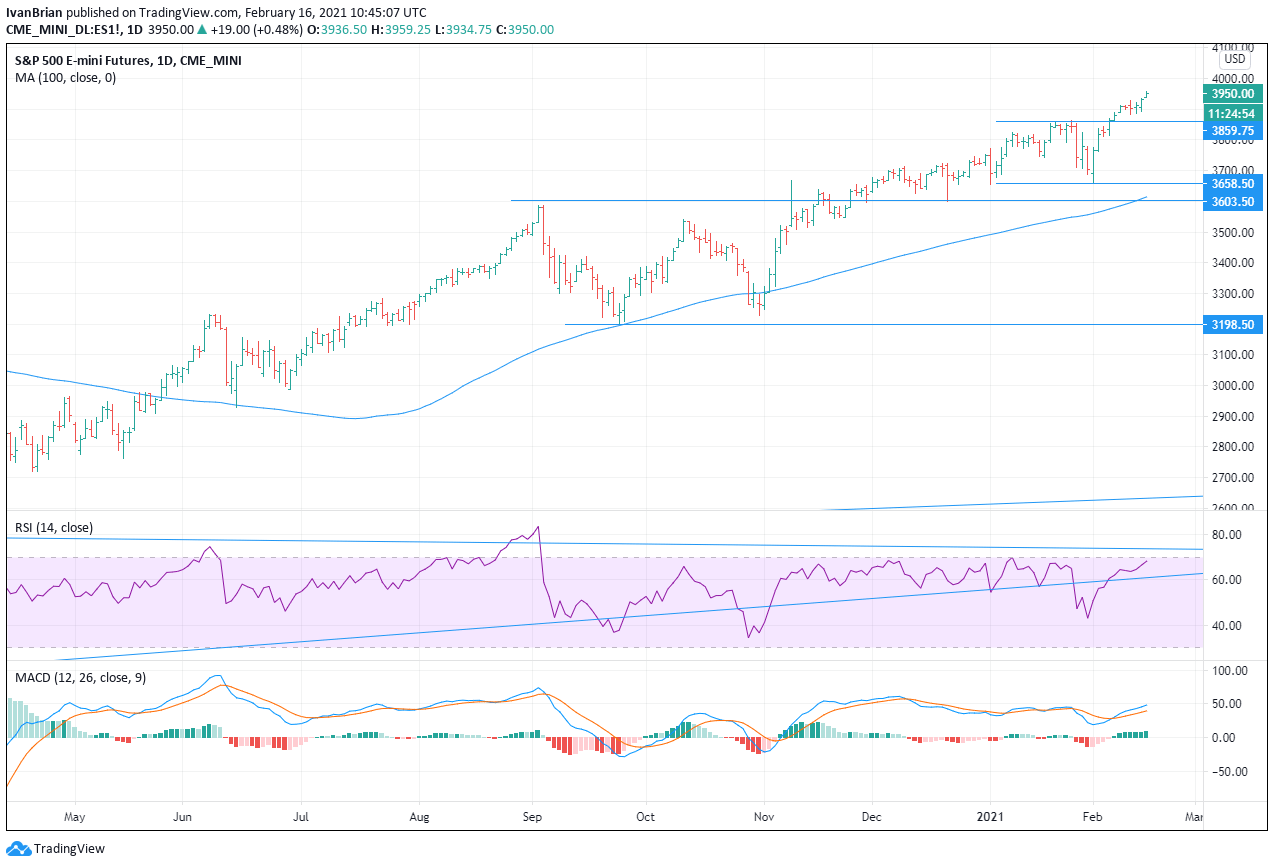 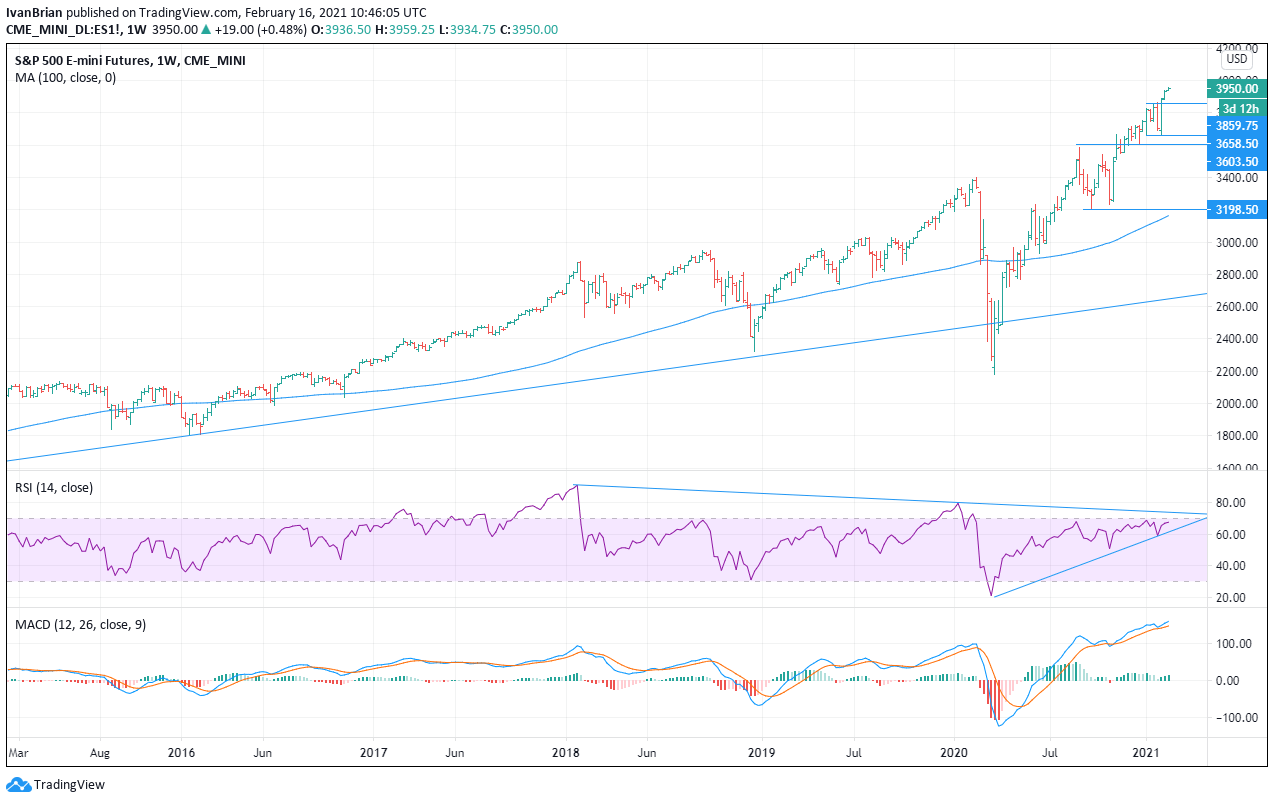