The market mood remains downbeat, as portrayed by Asian equity futures falling. Growing concerns about China’s coronavirus outbreak In Shanghai extended to some Beijing districts, keeping traders on their toes. Fears of wider curbs in Beijing are spooking investors already worried about the risk of a global slowdown as the Fed raises rates to tame inflation.

Additionally, last week’s Fed speaking increased the appetite for the greenback. Money market futures shows that investors have fully priced in a 100% chance of a 0.50% rate hike in the May meeting, while for June, the odds are at 80%, as shown by the CME FedWatch Tool.

On Thursday of last week, Fed Chair Jerome Powell blessed a half-point interest rate increase by the May 4-5 reunion. Furthermore, San Francisco Fed President Mary Daly noted that the Fed “will likely” raise rates by 50 bps at a couple of meetings. Daly reiterated that the Fed needs to take a measured pace on rate hikes and get interest rates up to 2.5% by the end of the year.

Elsewhere, St. Louis Fed President James Bullard admitted that the Fed is behind the curve but not as everybody thinks, while adding that the Fed has hiked 75 bps before without the world coming to an end.

Last Friday, Cleveland’s Fed President Loretta Mester commented that she would like to get neutral to 2.5% by the end of the year. When asked about 75-bps increases, Mester added that “we don’t need to go there.” Furthermore, she supported a 50-bps increase in May and a few more after.

The economic calendar for the US would feature March’s Durable Goods Orders, the US Gross Domestic Product for the Q1, and the Core Personal Consumption Expenditure (PCE) for March on annual and monthly readings, alongside the Chicago PMI.

Analysts at ING expect Q1 data to show the US economy expanded at a 1-1.5% annualized rate, which would be below Q4 of 2021 at 6.9%, reflecting the Omicron wave of the pandemic that impacted mobility considerably.

The US Dollar Index (DXY) retains its upward bias, as depicted by the daily chart. The 50 and the 200-day moving averages (DMAs) at 98.596 and 95.504, respectively, are well located under the DXY value, further cementing the upside bias. The Relative Strength Index (RSI) at 71.24 is in overbought territory, so a deceleration in the DXY trend is on the cards. 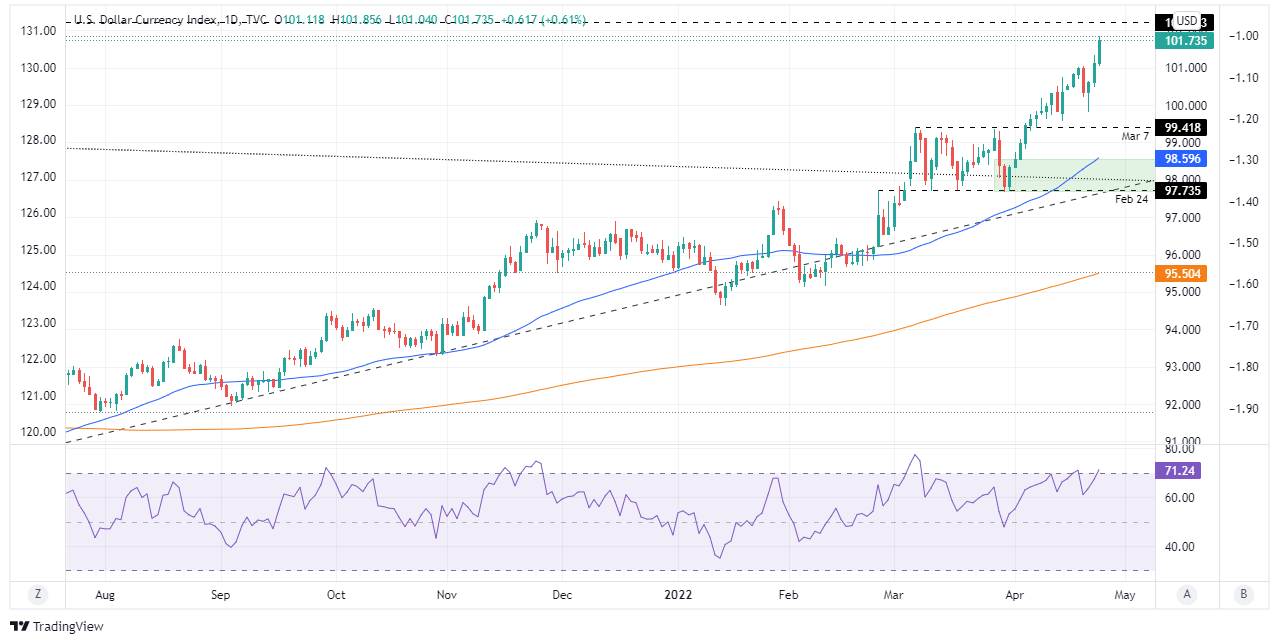 Gold price extends its recent retracement slide from the vicinity of the $1,950 level, or a nine-month high touched last week and remains under some selling pressure on Tuesday.