The recent police shooting in Wisconsin has prompted professional sports franchises to boycott their games to bring attention to the Black Lives Matter cause. All three NBA playoff games were boycotted by the respective teams and several Major League Baseball teams have followed suit as players continue to use their platforms to attempt to bring positive changes to America. Urban One’s stock fell 13% during trading hours on Wednesday, adding to the near 20% decline in price so far this week. Shares spiked after hours though as Urban One gained back nearly 15% after the cancellations were announced. The media conglomerate caters primary to African-Americans, hence the rise in interest.

It has been a tumultuous year for Urban One as the stock briefly touched $54 at the height of the Black Lives Matter protests – but has since dropped more than 90% to trade at its current levels of $3.90, well below its 50-day and 200-day moving averages. At one point in mid-June, the stock skyrocketed over 230% in a single day, showing the sort of volatility that has come with being a company involved in the fight against social injustice. Now, with the NBA and MLB boycotting their games, investors are clearly hoping that UONE’s shares will return to those levels once again. 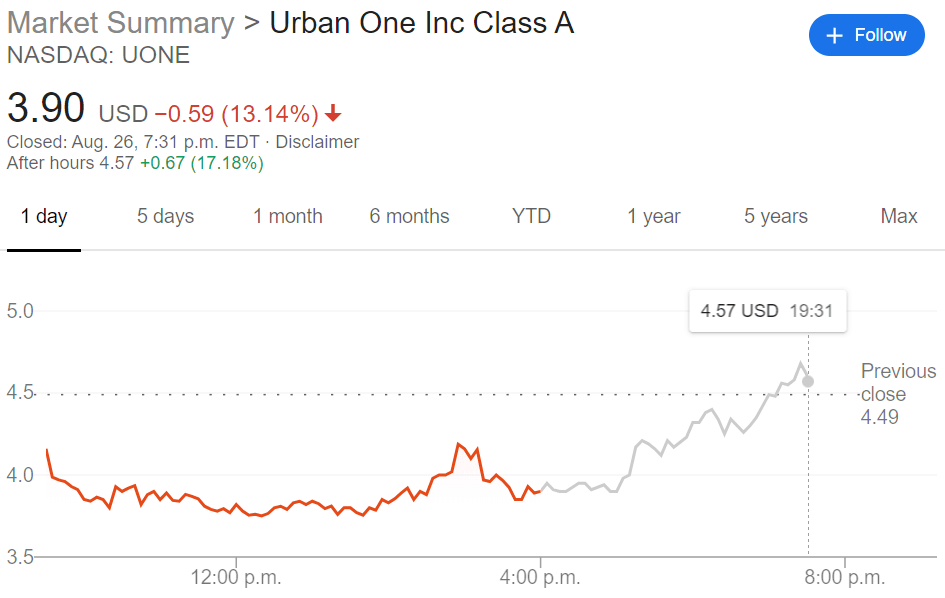 With the impending rise in Black Lives Matter protests and news coverage of the NBA and MLB boycotts, Americans should be tuning into Urban One channels more often. The broadcasting firm also had a rather upbeat earnings report with a rise in revenues to $76 million and a positive EBITDA of $35 million which compares well with industry rivals. It remains unfortunate that a police shooting could be the catalyst for a rise in a stock’s price but this could very well be the case for Urban One over the next few weeks.