Tesla (TSLA) began Tuesday in a subdued mood with the stock trading lower in the premarket and looking to crack the $1,000 support line. However, a huge surge in the whole electric vehicle sector saw Tesla turn the narrative around and close strongly up at $1,054.73 for a gain of 4.1%. The move was once again ignited by Lucid Motors (LCID) and Rivian (RIVN), which only had its IPO last week.

Rivian stock was up 15% and has now more than doubled from its IPO price of $78. RIVN is now worth more than Volkwagen, which sells 10 million cars a year. As if more evidence was needed of the extreme froth in markets right now, Rivian is the third-largest auto manufacturer in the world by market cap (certainly not by sales numbers). Momentum, however, is a powerful force, meaning stocks can move massively away from fundamentals. Tesla itself is often cited in this regard as it too is worth so much more than its competitors. At least in the case of Tesla, it did more or less single-handedly invent the EV space while legacy manufacturers have been playing catch up.

As we can see from the intraday chart above, Tesla opened at the low end of the day's range and powered higher. This low opening was due to more share sales being disclosed by CEO Elon Musk and news of JPMorgan suing Tesla over a warrants transaction. However, EV bulls quickly took over and the stock surged quickly before trading rangebound for most of the remainder of the session. The sector was boosted by news from rivals to Tesla's EV crown. Lucid Motors said reservations for its cars rose sharply, causing a 24% rally in Lucid the LCID stock price. Rivian also rallied strongly in a continuation from the IPO.

Elon Musk also sold another 934,000 shares on Tuesday to pay taxes. The CEO has repeatedly been selling shares of late and has a hefty tax bill as a result.

TSLA still looks bearish to us, and this bounce just gives a better entry for bearish positions. Only a break above the 9-day resistance at $1,070 would have us rethink our bearish view. $1,000 remains the first target, and once through here $910 is next in the crosshairs. The sharp move lower from the initial shock of Elon Musk's Twitter poll has been consolidating, forming an inverse flag. This is a continuation pattern with the target being the length of the flagpole. That gives a target of $850. 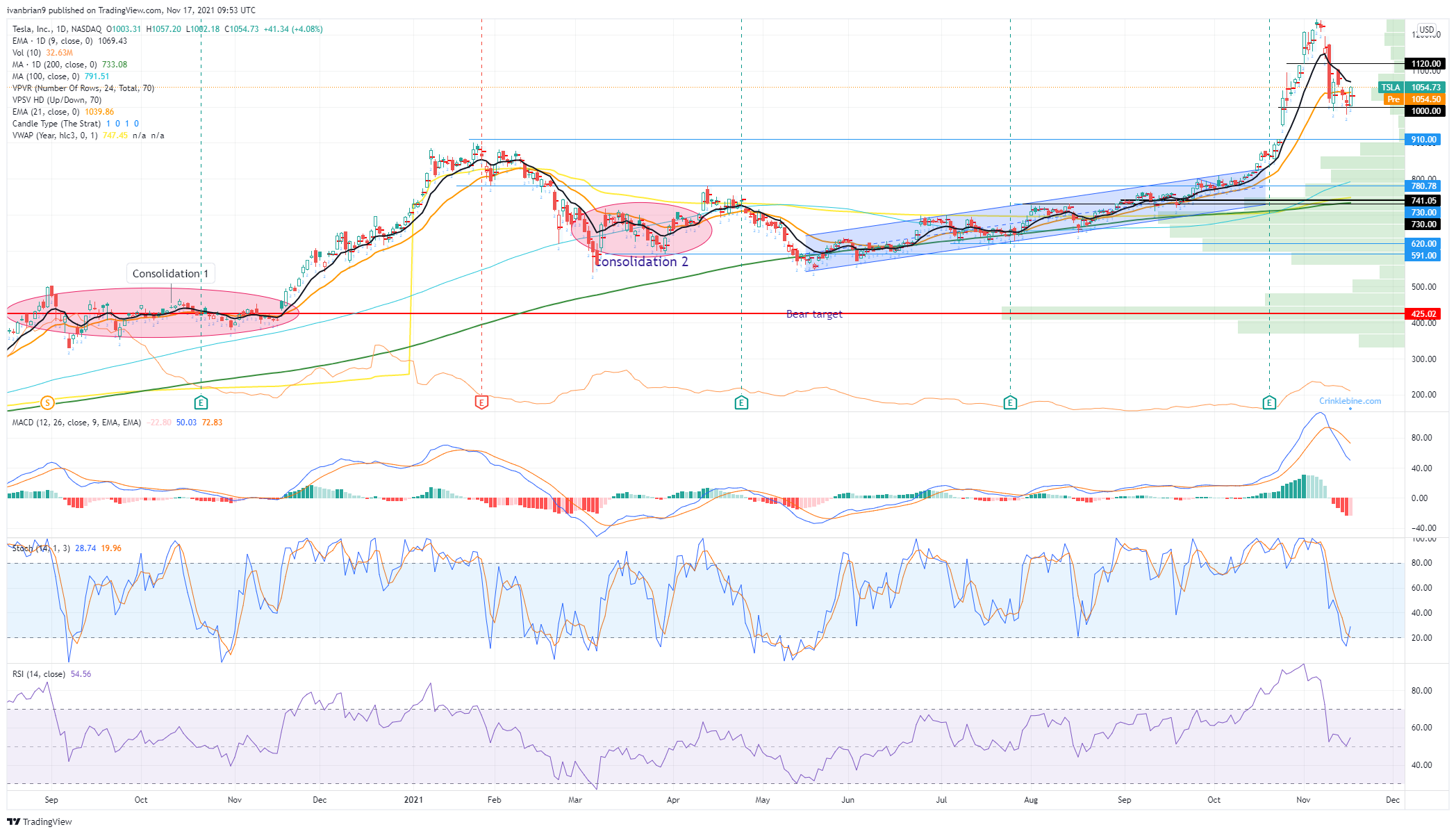