Update: Elon Musk has reportedly pulled back from the Twitter (TWTR) deal. He announced this on Twitter (ironically enough!). It does seem a pretty lame excuse. Surely he and his team would have done thorough due diligence on what exactly they were spending $44 billion on! We had been speculating that this deal would be getting less and less likely in the current macro environment. Credit is getting increasingly scarce, and this deal was at a significant premium in our view. Interestingly, Tesla (TSLA) has risen on the back of this news. In the event of the deal not going through, however, Elon Musk will have to pony up a $1 billion fee. How would he raise this money? One option would be to sell Tesla stock. He is the world's richest man, but this is largely down to his holdings in Tesla. We are not sure of his cash holdings, but $1 billion is a lot of loose change. It does perhaps stop a large chunk of Tesla stock from being pledged as collateral for the Twitter deal, so that is behind the relief rally. 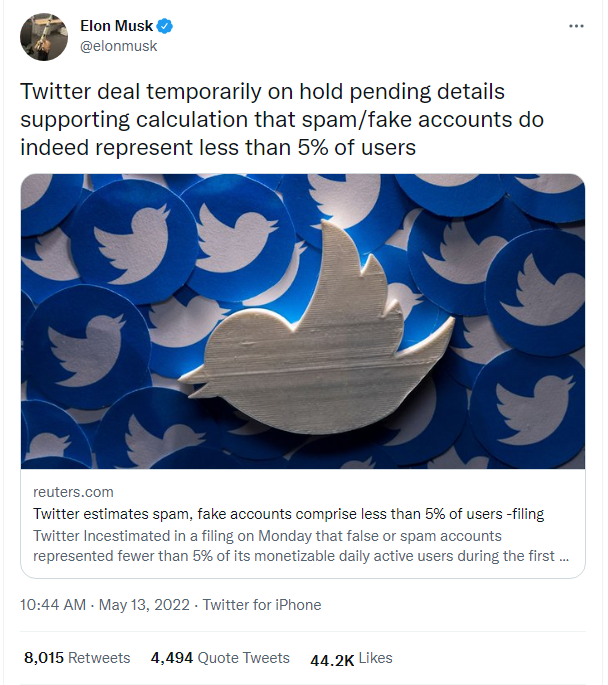 Tesla stock (TSLA) may have put in a temporary bottom. So too may have the broad market. Thursday witnessed more losses as major indices were looking at losses of nearly 2%. However, a late intraday rally saw most indices recover nearly all of these losses and only close barely in the red. This is the first time this week that markets have rallied into the close rather than accelerating losses. We view this as a potentially decisive momentum shift with a short-term bear market rally now more than likely.

We had for some time identified the strong $700 support level that Tesla looked to be targetting, and this was finally cracked on Thursday. Tesla bottomed out at $680 early in the session but recovered for the remainder of the day and closed back above the $700 level. This is significant to both bulls and bears. The bears now have a new lower low to continue the bearish trend in place, while bulls can point to the strong close and look for at least a bear market rally if not more. We feel it will "only" be a bear market rally, but those can be powerful.

Perhaps the early news of another Tesla recall weighed on sentiment, but as we pointed out in our note on Thursday, previous recalls never did much to dent Tesla's share price. Apart from that, there is not a whole lot of news to get into. The Twitter takeover saga rumbles on with Elon trying to reduce his reliance on Tesla stock as collateral. The Giga Shanghai factory is back up and running and saw its first exports leave Shanghai port this week.

Regardless, the market is currently overly driven by macro factors will little attention paid to company-related news. Investors have been dumping everything. We, not our risk appetite monitor, may be improving. Bond yields have fallen overnight, the safe-haven dollar is a touch weaker, Asian equities are rallying, and Thursday saw the rally into the close as mentioned. Also not on Thursday was the return of meme stocks to some extent. Many put in 10%-plus rallies, so risk appetites are returning. Bitcoin too is back on higher ground.

As mentioned, $700 was broken but only briefly. Now it is time to rally, but how far can TSLA go? Getting to $825 is the first target, it is the 9-day moving average and the spike low from April 28. Above there and $945 remains the bearish pivot in the medium term. 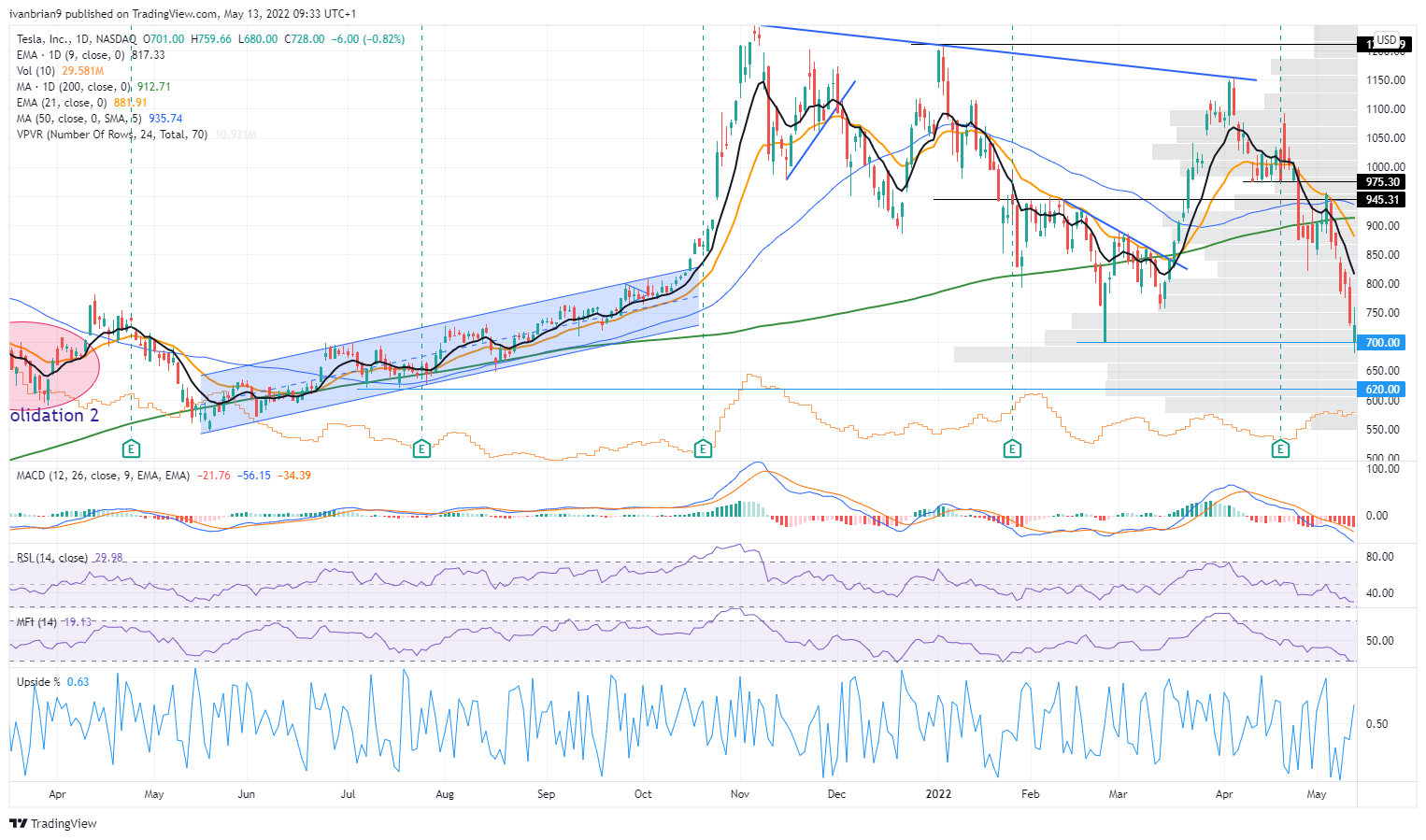