Update: Tesla (TSLA) plunged 12.18% on a terrific Tuesday trading, once again dominated by the Twitter takeover theme. TSLA stock lost $126 billion in value as investors fretted that CEO Elon Musk may have to sell Tesla shares to fund his $21 billion equity contribution to his $44 billion Twitter takeover bid. Adding to this, concerns over slowing global growth and aggressive Fed tightening weighed heavily on the tech stocks, leading Nasdaq Composite Index (NASDAQ) to close at its lowest level since December 2020. The slump in Tesla shares could be a cause for concern for Musk, as it could jeopardize financing his Twitter deal. The shares of the EV giant closed Tuesday at $876.42, way below the $1000 threshold.

Tesla (TSLA) stock was left in the shadows on Monday something it is not accustomed to. But fear not it is likely to be short-lived as the Technoking of Tesla now has the world's largest advertising board for Tesla. Elon Musk made good on his takeover offer for Twitter as the Twitter board did a sharp about-turn once they smelled the green in front of them. Only last week they had strongly defended themselves against Elon Musk's take over offer. Musk offered to buy Twitter for $54.20 per share all-cash in a final take it or leave it deal. The Twitter board met to consider the offer and adopted an aggressive poison pill defense mechanism. This is an unusual move and allows a company to issue stock to existing shareholders while diluting the potential purchaser. It appeared they were hoping to buy time for a white knight bidder to appear over the horizon but no savior was forthcoming.

All this of course is of mild interest to Tesla (TSLA) shareholders, but what is more interesting is the news that Tesla (TSLA) stock has been put up as security for the Twitter takeover deal. Various reports seem to be in agreement that Morgan Stanley has stumped up $25 billion for the deal in loans with $12.5 billion secured against Tesla (TSLA) stock. The last time we had a block sale of $10 billion or more in Tesla was Elon's famous Twitter poll. That led to Tesla shares dropping about 11%. In the big scheme of things, it is not all that significant when you consider the market cap of Tesla. What should be more concerning is the further suite of lockdown going on in China. Covid is finally making significant inroads and Shanghai is now facing more lockdowns as is Beijing. Giga Shanghai has been suspended but the factory last week resumed operations and over 8,000 workers returned to the plant. It is as yet unclear how these further lockdowns are affecting Giga Shanghai and suppliers to the plant. On Monday Apple supplier Foxconn was forced to close two factories in Shanghai after covid cases.

In other related news, two tech titans and the current world's richest man Musk took on the former world's richest man Bill Gates in a conversation that has quickly gone viral. Elon Musk according to various reports and leaked screenshots asked Bill Gates if he was short Tesla to which Gates is alleged to have replied that he was. At least your author is in good company then (I am currently short). But Tesla stock may be due for a turnaround after a strong close for markets yesterday. Tesla last week announced strong earnings which did not see the share price get the follow-through it deserved. I had expected to be stopped and still do. Tesla looks ready to rally and I may even reverse and go long, don't worry I'll keep you all updated. I know my positions are closely followed by all of you!

$975 is holding as strong support and is the short term pivot point. Equity markets put in a strong rally late on Monday. But earnings season is upon us so expect some hesitation until we get a bit more clarity this week from Apple (AAPL), Microsoft (MSFT), Google (GOOGL), Amazon (AMZN), and others. $975 and $945 are strong support with $900 then the 200-day moving average. Holding and the high at $1153 is the first target. 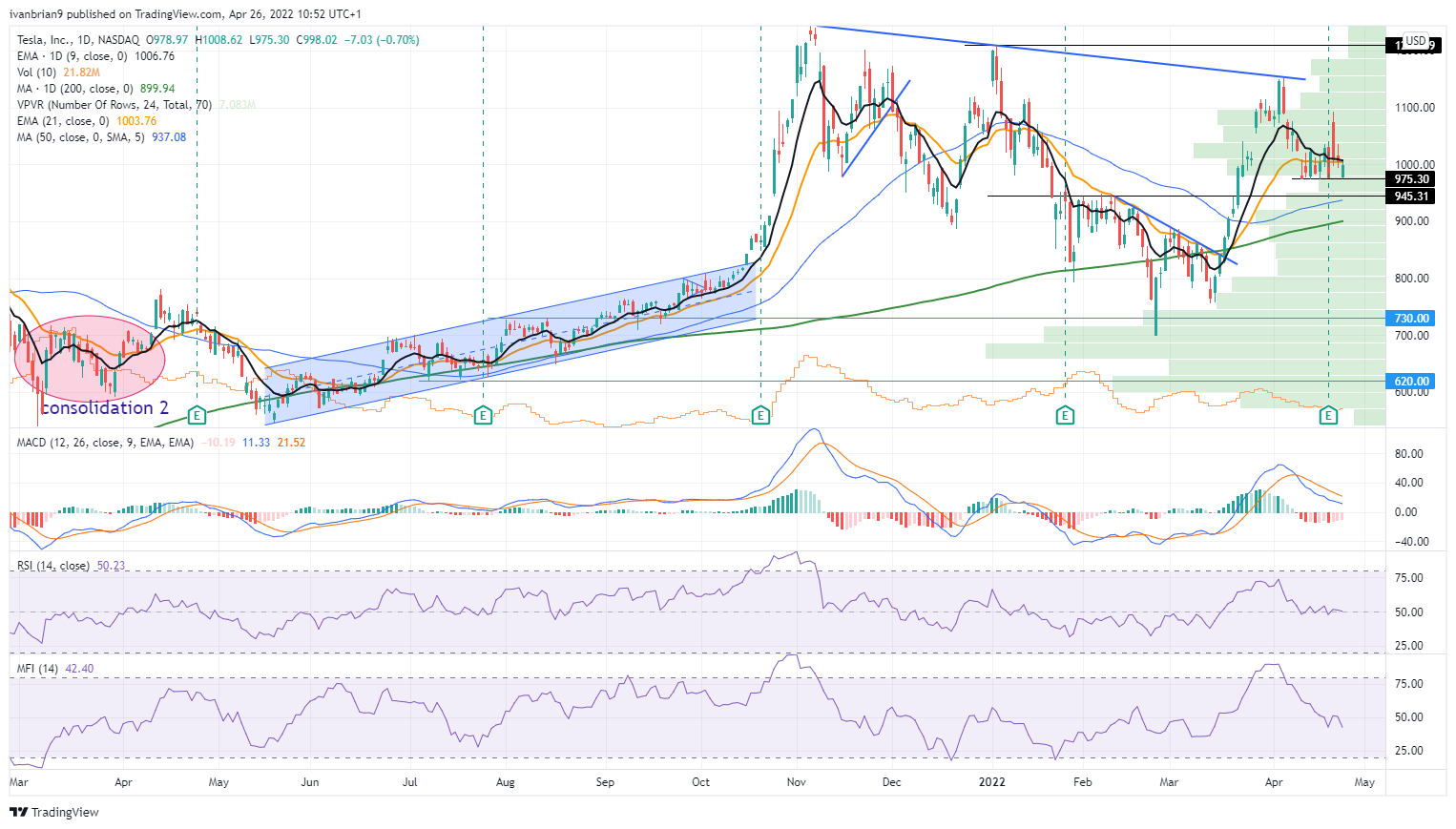 The author is short Tesla stock

Update: Tesla (TSLA) was caught up in the risk-off sentiment on Tuesday and dropped heavily below its sideways consolidation channel, falling all the way to test daily support in the lows, a touch below $880.00. However, given the weekly M-formation, a reversion pattern, the price could be in for a correction from daily support. Pulling up the Fibonacci scale along the weekly bearish impulse, a 23.6% retracement meets the early 2022 resistance near $925.00. further up, the neckline of the M-formation has a confluence with a 50% mean reversion of the bearish impulse around $983.60. On the other hand, the bears could stay with the trend and mitigate the price imbalance for the March 2022 rally to $756.00.