Before you ask yes I am still short both Twitter (TWTR) and Tesla (TSLA). This is not a crusade or anti-Musk view, merely a view on high-growth names continuing to suffer in the still-developing bear market and a view that this TWTR deal is going to get harder and harder in the current climate. Tesla as ever provides plenty of copy and these past few sessions have been no different. The end result was a significant move higher on Tuesday after the long weekend. This was despite some negative news so is this a case of a potential bottom, rallying in the face of bad news is one of the key signals to watch for when trying to identify a turning point.

First, let's tot up that supposed bad news and see where it leaves us. We have had news of layoffs at Tesla of up to 10% of the salaried workforce and 3.5% of the total workforce. This is supposedly in response to Elon Musk's "super bad feeling" about the economy that he voiced earlier this month. News of the layoffs came at the Qatar Economic Forum where Musk was speaking. Musk told Bloomberg that the salaried workforce had grown too quickly.

As an aside, Tesla is facing a lawsuit from ex-employees from its Nevada plant alleging that a mass layoff violated federal law as advance notice was not given. The suit is being brought by two former employees who were laid off according to Reuters. At the same conference in Qatar, Elon Musk said that supply chain issues and raw material shortages were the biggest obstacles to growth at the moment. Earlier in June, a leaked email from Musk had alluded to a "very tough quarter" in Q2.

To get all the bad news out, Bitcoin could also provide another headwind in the next Q2 earnings report due on July 22nd. Tesla invested about $1.5 billion in BTC back in 2021 and could be facing a loss of up to $500 million on that investment now that the crypto winter is upon us and Bitcoin price is tumbling. This potential loss is, however, relatively small to a company of Tesla's size.

There you have it a cacophony of bad news, but despite it, TSLA stock shrugged it off and moved sharply higher on Tuesday. In the process, it regained the $700 level and closed over 9% higher. This marks an impressive advance in the face of what can be deemed bad news. Certainly there appeared to be a lack of any definitive catalyst. So has Tesla stock bottomed out?

TSLA stock forecast: Tesla has not bottomed out

Logically, I am going to say that as I am short TSLA stock but hear me out. The $620 level has been the key support and so far Tesla share price has had two looks and balked at going below. This does give a potential double bottom. We have a month until the next earnings report so until then we are likely to move in tandem with the broader market. Certainly, a large part of the rally on Tuesday was down to the Nasdaq gaining 3%. The longer $620 holds as support then the more likely Tesla is to have bottomed out. If $620 is not broken immediately after next month's earnings (or before) then it is time to close my short.

However, breaking $620 means a move to the perfect double bottom at $540 is likely. Below that and $434 is a strong support zone.

Overall, we are still sticking with the bear thesis. If you want more detail take a look at the TSLA deep dive. Current assumptions look too high for the analyst community. Basically, they assume Tesla will transfer its high market share in EVs to the mainstream auto market once this is fully electric. This is despite the current largest auto manufacturer Toyota rarely exceeding 10% market domination. Such a market share for Tesla makes current assumptions way too high. In the shorter term margins are likely to fall and deliveries follow, I have a "super bad feeling" about it. 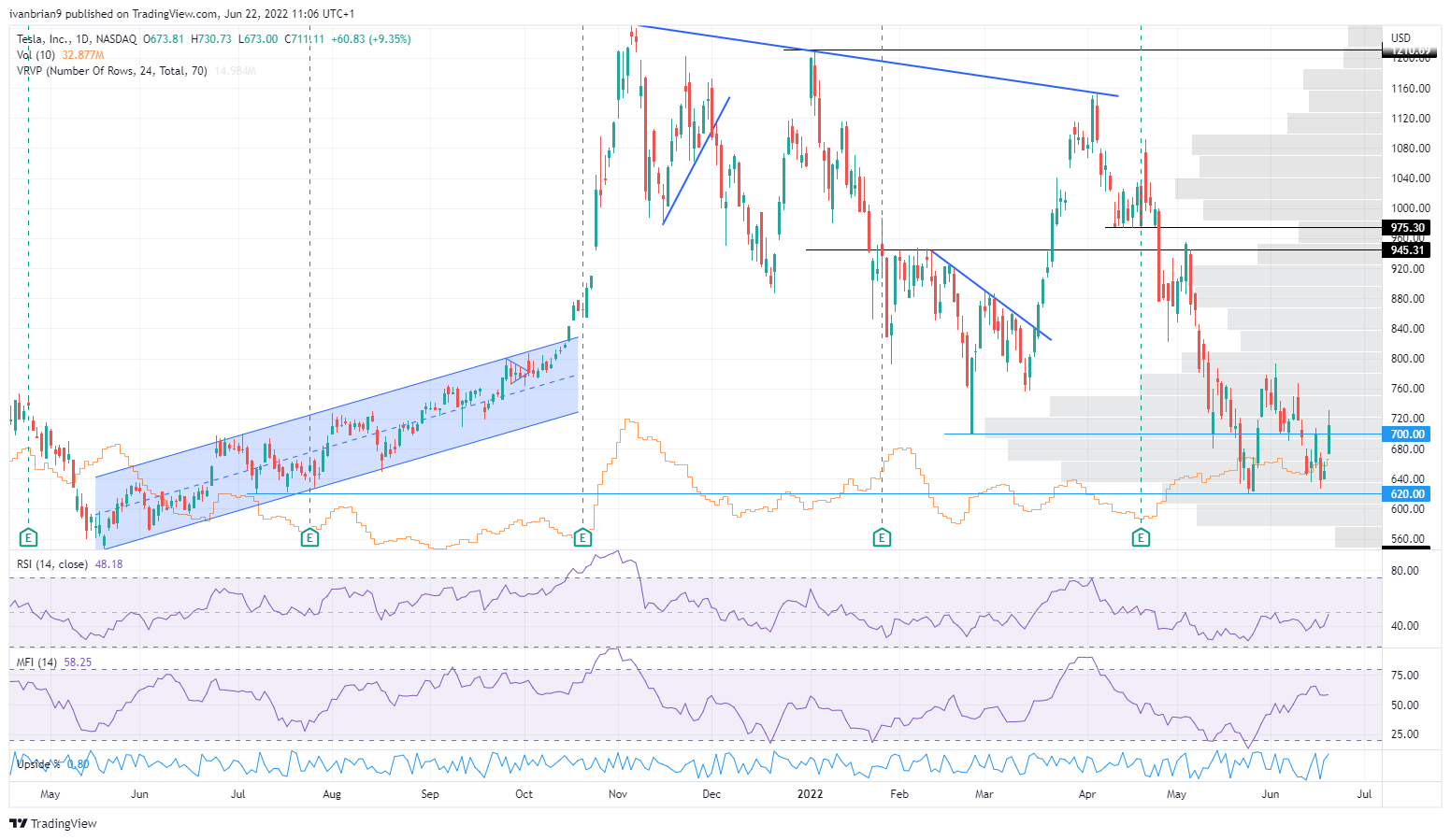