Major US indices struggled to eke out gains on Friday to end the week on a positive note. The week began cautiously as investors had suffered through a tech headwind for early March. But a sharp rebound ensued as doveish Central Bankers, entwined with stable US CPI, and calm 10-year auction assuaged investor fears. Tech began its recovery with some huge gains in sector leaders. Tesla added a cool $100 billion to its market capitalization on Tuesday as it rallied 20%. The S&P followed the Dow's earlier lead and posted a new record high on Thursday.

Friday saw risk fade into the back round as the 10-year yield hit fresh highs above 1.63% and US PPI wasn't exactly doveish either. Tech as ever showed its disdain for higher rates and duly slid back while the broader indices held on for dear life.

The Consumer Discretionary and Tech sectors led the way this week, closely followed by Financial with Energy and Healthcare the worst-performing sectors. Gamestop reasserted itself with stellar volatility, Roblox added to the gamers portfolio and Tesla staged the $100 billion day on Tuesday.

Consumer sentiment hit a yearly high according to data from the University of Michigan on Friday as vaccination and reopening flow into consciousness.

The Dollar had a productive start to March, smirking down at its European vaccine-deprived peers and filling its chest at the thought of stimulus boosted growth rates with higher rate differentials versus the sluggish Euro. EuroDollar gave up 1.20 easily and 1.19 soon followed before finally bottoming out at 1.1850 on Monday. Risk on and doveish speak led to the recapture of 1.19 before a Dollar recovery on Friday as inflation returned.

Oil continued to show strength as inflation and OPEC+ cuts backended prices with Brent holding above $70 until Friday.

US Clocks go forward 1 Hour on Sunday night/Monday morning. Europe does not, so the time differential narrows one hour.

US yield curve steepens with 2-10 year spread widening to a 5 year high.

Flows into US equity mutual funds doubled this week from a week earlier according to data from Refinitiv.

Checks of $1,400 are due to hit this weekend, early next week, as President Biden's stimulus bill goes into action. Recent surveys show up to 40% could hit the stock market.

Monday, March 15 sees NY Empire State Manufacturing Index, expected to show an improvement to 14.5 in March from a prior 12.1.

Tuesday, March 16 sees the German ZEW Index and US Retail Sales for February hit the tape. Retail sales are expected to show a fall of 0.5% as stimulus and reopening will not have filtered through.

Wednesday, March 17, Happy Saint Patrick's Day, US FOMC decision is due1400 EST/ 1800GMT. No change to interest rates is expected but any statements re inflationary pressures will be keenly watched.

Friday, March 19 no realases due.

Weibo reports earnings on Thursday before the market opens.

Accenture reports on Thursday before the bell. EPS estimate is $1.89 and revenues of $11.82 billion.

Nike also reports on Thursday, after the close. EPS estimate is $0.75 and revenue of $11.05 billion.

Dollar General on Thursday before the open. EPS estimate is $2.72, revenues of $8.29 billion.

Fridays saw a close just about on record highs set in February and exceed on Thursday. The question is will this make a nice bearish double top formation or a staging point for further gains? The Dow does manage to break new highs but the Nasdaq slides, giving us mixed signals. For now we remain in modestly bullish short-term momentum, above the 21 day moving average and close to highs. The MACD has also given a lagging crossover buy signal. Inflation concerns will dominate the narrative next week with Wednesday's FOMC meeting so the technical picture will resolve itself around this. 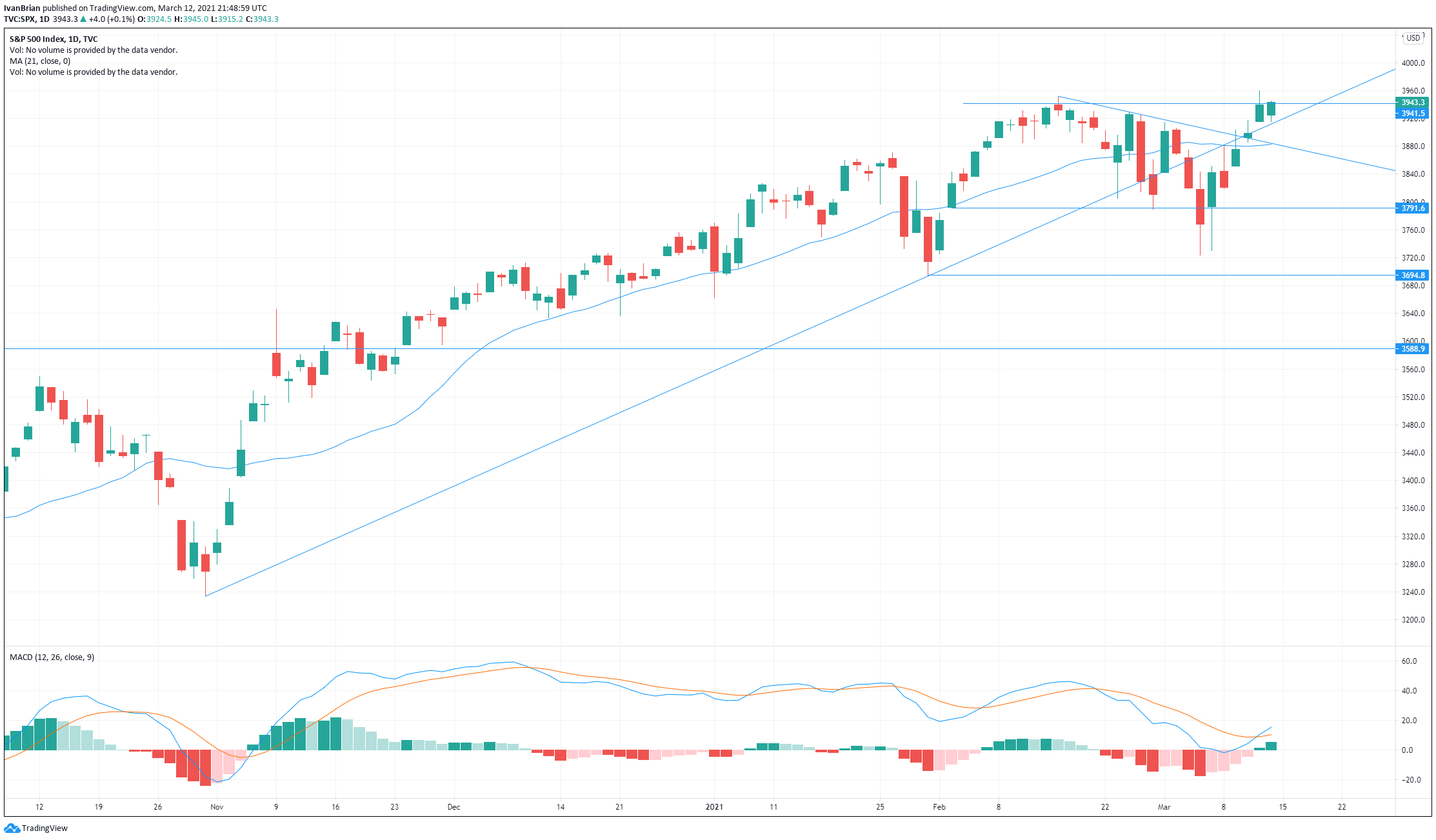 The shared currency remains under selling pressure against its American rival, trading in the 1.2080 area. Market players waiting for more hints in the form of April Retail Sales.