Update April 9: Sundial Growers Inc (NASDAQ: SNDL) has closed Thursday's session at $1.01, just two cents away from penny stock territory and after dipping beyond the one dollar sign. Can bulls keep the delisters away? According to Friday's premarket trade, shares are changing hands at $1.03. The Canadian cannabis company has been struggling with financial issues, among others.

NASDAQ:SNDL has started off the week in the red, just as it has performed essentially since the Reddit short squeeze momentarily catapulted Sundial into the mainstream spotlight. On Monday, Sundial fell another 2.73% to close the first trading session after Easter at $1.07. Shares have now fallen 73% over the past eight weeks, and according to Wall Street, there could still be more pain to come for investors of the Canadian cannabis company.

That report came from an analyst from Canaccord Genuity in late March, which downgraded Sundial’s stock outlook from a hold to a sell rating, and initiated a new price target of $0.65. The new price target represents a steep 40% decline from Monday’s closing price levels, something that isn’t too hard to imagine after Sundial’s recent performance. The analyst was not just taking the black swan event of the Reddit short squeeze into account, but also used the decline in fourth quarter net revenues as a bearish signal. In a fairly stagnant Canadian cannabis industry, Sundial has little room to grow aside from potential acquisitions of smaller companies down the road. 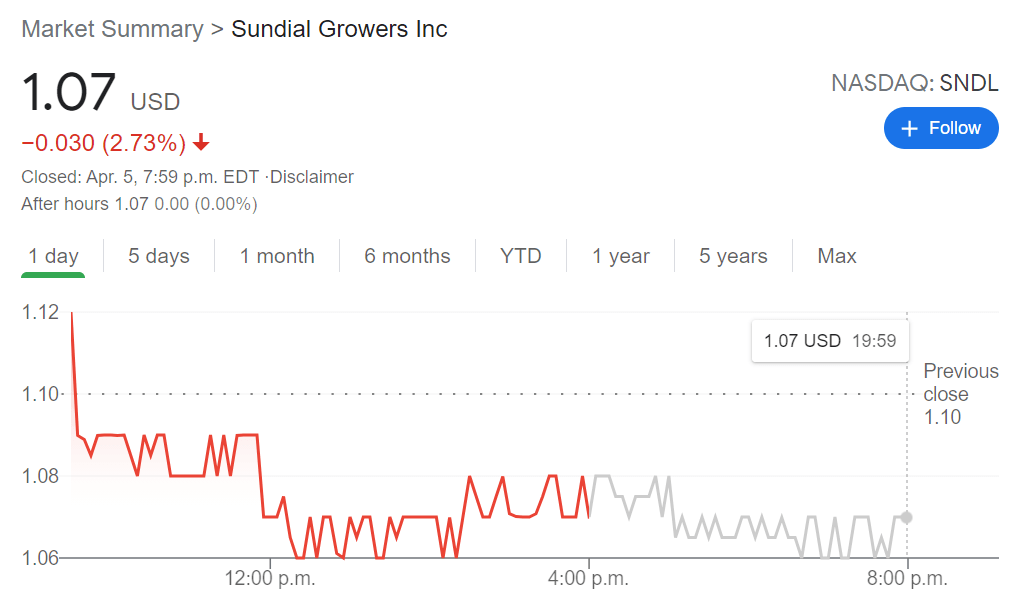 It seems as though the Reddit meme stock craze has dissipated just as quickly as it suddenly appeared back in late January and early February. Sundial has more or less been abandoned as a meme stock, with daily trading volume reaching only a fraction of what it once was. Currently Sundial has only about a 10% short float of its existing shares, so bag holders hoping for another short squeeze may have to wait for quite some time.

Update April 8: Shares in Sundial are lower by nearly 4% on Thursday at $0.9615. Earlier Canopy Growth announced it was purchasing The supreme Cannabis Co. as Canadian cannabis companies look to grow in order to target the opening US market.y.

Update 2 April 7: Sundial has continued its lower path again on Wednesday, losing 0.9% to $1.01. Retail traders appear to have moved on for now and recent share dilutions may also have provided a headwind. The stock had been a retail favourite on the hopes for increasing US opening up of cannabis markets.

Update April 7: Sundial Growers Inc (NASDAQ: SNDL) is trading at $1.04 in Wednesday's premarket trading, up 1.96% from $1.02, Tuesday's closing price. Investors were worried in recent days about the dilution of existing shareholders. Moreover, this "meme stock" has been losing some of its shine as retail traders have moved to new equities. Broader markets are optimistic about the prospects of a vaccine-led recover

Update: SNDL shares continue to lag the broader market on Tuesday as the fizz in the stock finally abates. this may not be a bad thing allowing the stock to return to more justifiable valuation levels. SNDL shares are down 3% on Tuesday at $1.032.

EUR/USD has jumped above 1.20, hitting the highest since March amid a risk-on mood and falling US yields. An uptick in EU vaccination rates is also boosting sentiment.

GBP/USD advances toward 1.39 as US yields drop

GBP/USD is on the rise as falling US yields drag the euro down. Britain's successful vaccination campaign and an optimistic market mood also support cable.

XRP price is poised for a significant rebound after the TD Sequential indicator presented two buy signals. The digital asset faces only one crucial resistance level on its way up. The number of large holders continues to steadily increase.