Silver extended its steady intraday descent through the early European session and dropped to the lower end of its weekly trading range, around the $25.90 region in the last hour.

The downward momentum dragged the XAG/USD below the lower boundary of a short-term ascending channel extending from YTD lows, around the $23.80-75 region touched on March 31. The mentioned support, around the $26.10-$26.00 area coincided with 200-hour SMA. A sustained breakthrough could be seen as a fresh trigger for bearish traders and might have already set the stage for further weakness.

Meanwhile, RSI (14) on the 1-hour chart drifted into the oversold territory and helped limit any further losses. Moreover, technical indicators on the daily chart are still holding in the bullish zone. This makes it prudent to wait for some strong follow-through selling below the weekly lows support, around the $25.85-80 region before positioning for an extension of the depreciating move.

The XAG/USD might then turn vulnerable to accelerate the fall towards the key $25.00 psychological mark en-route the $24.65-60 horizontal support. Some follow-through selling would allow bearish traders to challenge the $24.00 mark. This is followed by YTD lows, around the $23.80-75 region touched on March 31, below which the commodity could slide further towards the $23.20 support zone.

On the flip side, any meaningful recovery back above the $26.00-$26.10 confluence support breakpoint might now be seen as a selling opportunity and runs the risk of fizzling out rather quickly. This, in turn, should continue to cap the XAG/USD near the $26.50-60 heavy supply zone. Only a sustained move beyond the mentioned barrier will negate the bearish outlook and pave the way for further gains. 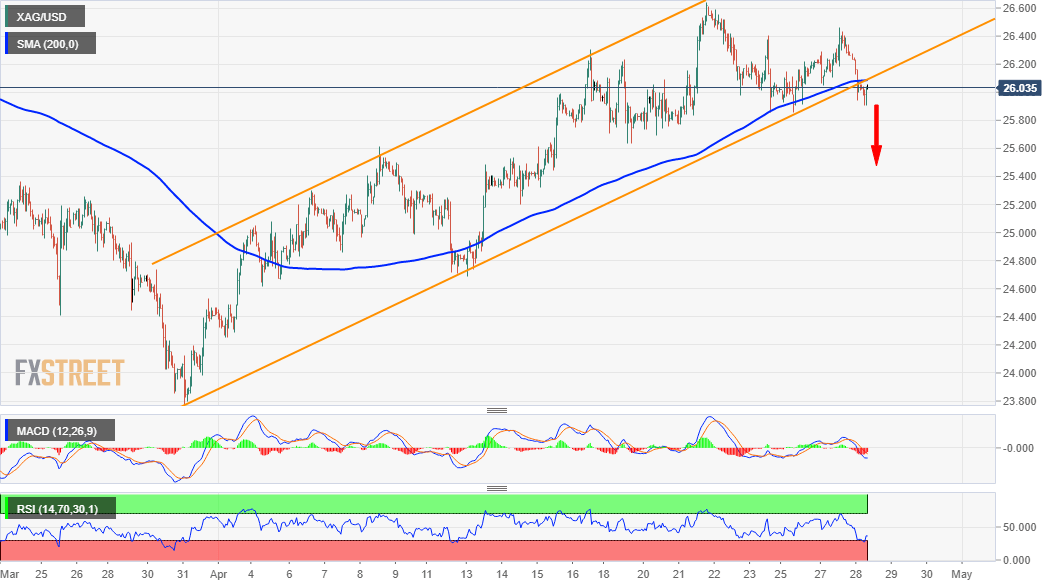