NASDAQ:SAVA pulled back on Tuesday after nearly doubling in price on Monday after Wall Street analysts were bullish on the biotech’s results from a Phase 2B clinical trial of their Alzheimer’s treatment Sumifilam. Shares fell 9.42% to close Tuesday’s trading session at $7.02 which is still well above its 50-day and 200-day moving averages. This comes after the stock skyrocketed by over 145% on Monday following the Cassava’s announcement. Trading volume has been high the last couple of days with over 14 million shares being traded on Tuesday compared to the average trading volume of 4 million.

Sumifilam showed a response rate of patients who showed improvements of 98% which is wonderful news for the company after news in May came out that the trial failed to achieve its primary endpoints. The reversal in the treatment’s performance was music to investors' ears as the micro-cap biotech company based out of Austin, Texas nearly doubled its market cap in the span of 24 hours. Maxim analyst Jason McCarthy upgraded his stance to buy and hold and eagerly announced a new long-term price target of $14. McCarthy used 2025 as the key year in which the finalized drug approval and potential launch would happen so investors do have a bit of a longer-term horizon if McCarthy is accurate in his claims. 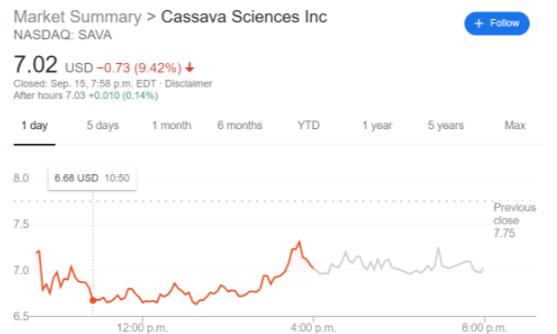 In the short-term, SAVA may have already accomplished a bulk of its growth over the last couple of days. Cassava hopes to have Phase 3 trials for Sumifilam to begin by late 2021 and is set to last a few years so McCarthy’s time estimates may be spot on. Investors should be in it for the long haul now as a successful Phase 3 could run the stock price up again and establish Cassava as a leader in the field of Alzheimer’s treatments.

XRP will expand out of the US if the payment giant faces a loss in the lawsuit. The community awaits the court's ruling on his speech and related documents. Analysts remain bullish on Ripple price