Update: Rivian is looking to re-gain the $120 level lost on the big stock market falls seen on Black Friday. The electric vehicle stock is trading on the green pre-market, about to open above $114 after having closed last week at $112.13.

Rivian can be said to have outperformed on Friday as a serious panic gripped global stock markets. The catalyst was the emergence of a new strain of covid in South Africa which may be more transmissible than delta and also able to avoid the current suite of vaccines. Oil plunged nearly 12% one of its biggest one-day falls ever. Stocks slumped with Europe taking the worst of the selling as the US market was on a half-day for Thanksgiving hangovers. Rivian fell to $112.13 but outperformed many stocks such as sector leader Tesla (TSLA) which fell over 3%.

Is it now time to buy Rivian? Is this the dip we have been waiting for? All dips in 2021 so far have proven worth buying so why should this one be any different? Certainly, early price action in the futures is showing a bounce back despite Asian markets still falling. But the evidence so far over just how bad this new variant is going to be is inconclusive. Rivian has been under pressure since telling customers they can expect deliveries of its Launch edition R1S pick-up truck between March and April, according to Electrek and Inside EV's. The reports cited a customer email from Rivian. This matters because it is a delay from the earlier expectations of January 2022. This has put more focus on a company that is valued as the third-largest auto manufacturer in the world despite not yet having delivered any vehicles.

While the last line above does make you wonder about the valuation world we live in and evokes fears of the dot com valuations for those that remember, Rivian (RIVN) is all about momentum. Most involved here are short term traders who do not give too much concern for long-term valuation metrics. The momentum though is this name has been slowing so even short-term traders need to be aware of that. The last 5 sessions have seen volatility drop and the daily range also reduced sharply, both signs of falling momentum.

$105 is the lat support before moving 5% swiftly lower to test the psychological $100 level. From $105 to $100 as we can see there is a volume gap so the move should be swift. Under $100 there is obviously no volume, so no price discovery. Resistance at $120 remains strong, shown on the chart with good price and volume action here. Breaking above $120 will surely see a quick move to $129 a big resistance. This is the point of control since IPO, the price with the highewst amount of volume. 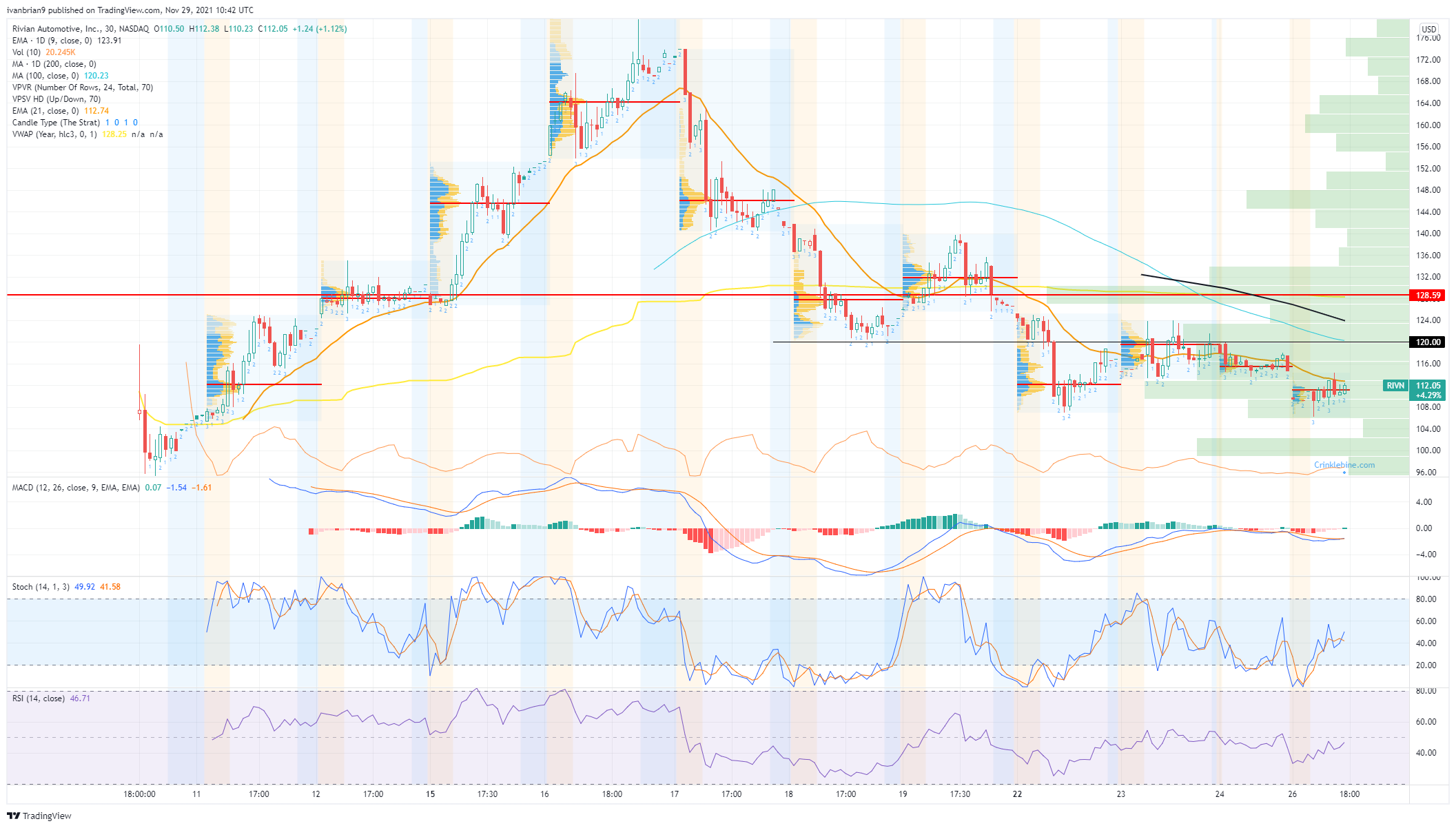