Rivian (RIVN) shares opened for trading on Wednesday, a little late, at $106.75 per share. The stock IPO'd at $78 after institutional investor interest saw the price range upped considerably from earlier estimates. The volume in Rivian (RIVIN) stock is already huge and is sure to be the biggest volume stock on the Nasdaq today.

Rivian listed at $78 having upped the price range twice. Initially, Rivian (RIVN) was slated to price the IPO in a range from $57 to $62. Rivian was on an investor roadshow last week. This involves meeting all the major fund and investment managers who may have an interest in buying shares in the IPO. Institutional investors will indicate how many shares they want to buy and specify a maximum price they will pay. Some funds will buy at the market others will put a maximum price. Once the bookrunners estimate demand for shares this helps them formulate the IPO price. Obviously the greater the demand the higher the price.

Clearly, in this case, the investor roadshow went well as the price range was guided up to $72 - $74 at the start of the week. Demand continued and Rivian (RIVN) eventually went on to IPO at $78. This has given Rivian (RIVN) a market cap of about $77 billion putting it on a par with Ford (F) and ahead of such notables as BMW and Stellantis. Rivian raised nearly $12 billion from the share sale. The Rivian CEO said on Tuesday the company aims to build at least one million vehicles annually by 2030. Rivian CEO RJ Scaringe said the company would have four assembly plants globally. "We better be growing at least that quick; certainly before the end of the decade is how we think about it," Scaringe said. Rivian currently has one plant in Normal, Illinois which has the capacity to manufacturer 150,000 vehicles. Rivian currently is producing the R1T pickup truck with a starting price of $67,500. The SUV R1S is due soon. The company also has an order from Amazon for 100,000 electric vans. 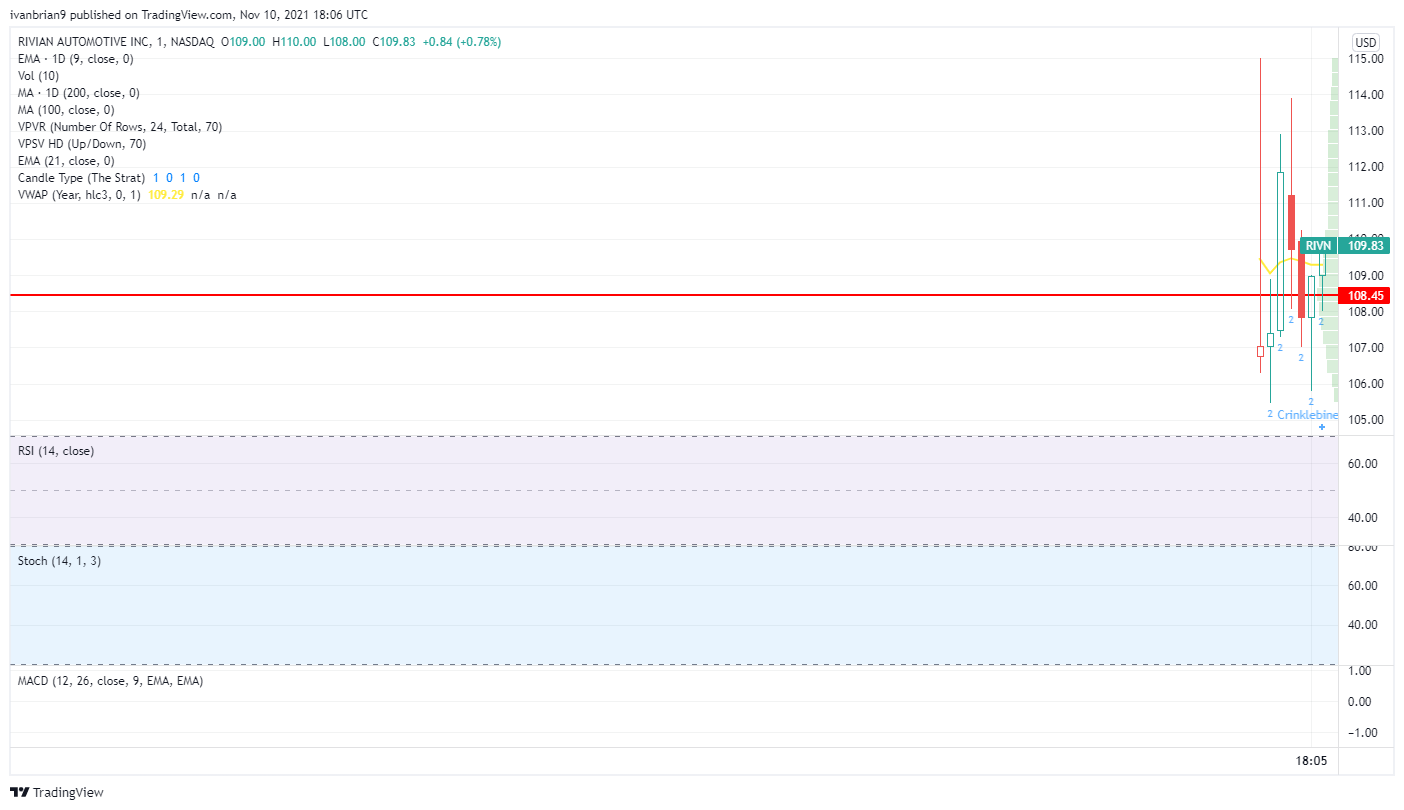 Update: After an outstanding debut, Rivian (RIVN) trades just below the $100.00 mark, retaining impressive gains despite the sour tone of Wall Street. US indexes plunged on Wednesday, following news that US inflation soared to 6.2% YoY in October, its highest in three decades. Stocks accelerated their slumps on news that the Chinese giant Evergrande officially defaulted on $148.13 million in interest payments and market talks hint at the Deutsche Marktscreening Agentur (DMSA) preparing bankruptcy proceedings against the Evergrande Group. Ahead of Wall Street's close, RIVN is trading roughly 28% higher on the day.