Update: Redbox Entertainment shares ditched the Wall Street bloodbath and rebounded 15.68% on Monday, ending a three-day losing streak. The RDBX stock price ignored the steep losses in the US indices, triggered by recession fears, as there are increasing expectations that the Fed is set to hike the key rates by 75 bps on Wednesday. The Nasdaq Composite lost 4.68% of its value to settle at 10,809.22. The rally in the RDBX shares was mainly backed by an upsurge in the meme stocks. Friday’s new short-interest report showed short-sellers piling into the stock with the short-interest ratio tripling from the previous period, which also helped the short-squeeze.

Redbox Entertainment (RDBX) stock continues to defy the laws of gravity and, for the most part, the laws of finance or economics as it continues to grab massive gains. This is despite the overall negative tone affecting markets, which are seeing most stocks and sectors suffer huge losses. Not Redbox though, as the stock soars to the top of the social media chart in the meme stock space on the back of a tried and trusted argument – a short squeeze.

Redbox is like Blockbuster – doomed. Redbox offers those kiosks you see in your local store, the DVD vending machine kiosk. The ones you walk past and always wonder who uses those things. Just take out your phone, and you find a better selection. Who even has a DVD player in their house anymore? So that is what you are buying, a very old school company. Sometimes old school things go for a premium, like baseball cards and classic cars, but there is no such thing as a classic stock. They just wither and die and go bankrupt. Or get taken over as is the supposed case here.

Back in May Chicken Soup for the Soul (CSSE) came in to put Redbox out of its misery with a take-out deal that was not exactly well-received by CSSE shareholders. CSSE stock fell about 30% when the deal was announced. That was also after CSSE missed earnings. For the life of me, I cannot fathom why CSSE wants to buy Redbox, and Wedbush seemed to agree when it was pretty negative in a note to clients and put a $0.65 price target on RDBX stock. RDBX stock is currently trading at $15.70 in Monday's premarket.

Why the massive outperformance then? Well, short interest in RDBX has reportedly exceeded 100% last week. It is also a low float, low volume name, so was a perfect squeeze candidate. By the middle of last week, it was the top trending stock on social media, and the trick appears to have worked, judging by the massive share spike. However, it will not last, so please be advised to head for the exits and take your profits quickly. It was a good plan, well-executed, but time to let it go now. There may be another day or two given the massive 200%-plus short interest, but it will turn violently at that.

There is not much to say here except that this will run out of steam fairly soon, and I am tempted to short it or buy some puts. This is not one for technical analysis. 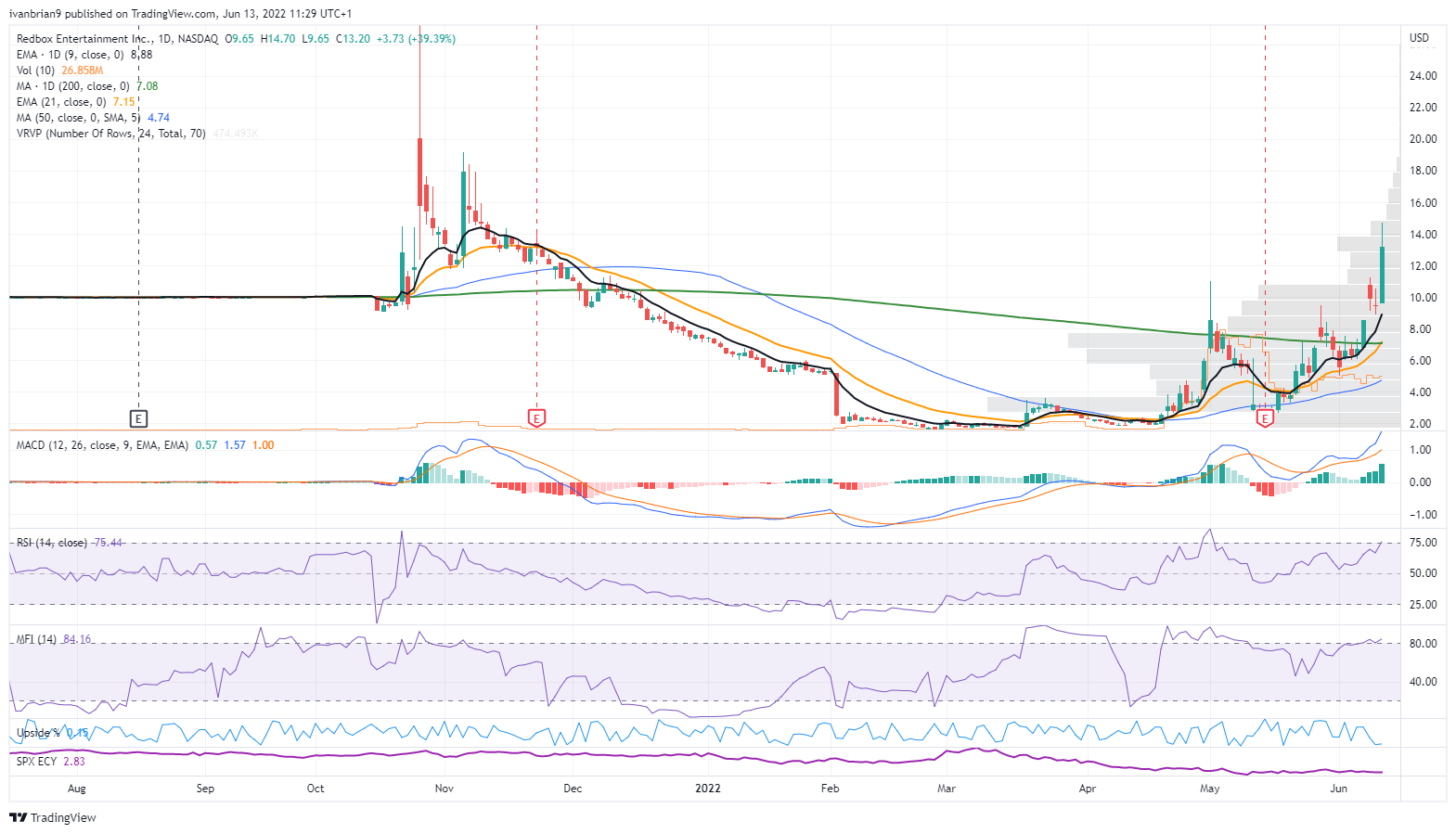 Update: Redbox Entertainment shares managed to maintain the positive momentum on Monday, despite panic selling hitting Wall Street. RDBX added 15.68% on the first trading day of the week to end it at $15.37. US indexes, however, plummeted. The Dow Jones Industrial Average shed 876 points, while the S&P 500 lost 4.13% to reach fresh 2022 lows. Finally, the Nasdaq Composite settled at 10,809, down 4.68% or 530 points.

Hell broke loose as speculative interest started considering a potential 75 basis point rate hike in the US, following record inflation figures released on Friday. US Treasury yields soared, while the yield-curve temporarily inverted ahead of the opening, hinting at a potential recession coming in the foreseeable future.

Update: Redbox Entertainment shares traded up more than 37% on Monday as the WallStreetBets and meme stock crowded jostled to get a piece of the short squeeze candidate. The stock is thinly traded and heavily shorted, so it makes for an easy short squeeze target. $18 strike calls that expire this Friday are trading for $1.90, and 3,120 contracts at that strike price have traded on Monday morning. 45 minutes into the session shares have retracted to $16.45, about 24.3% higher than Friday's close. Redbox is undoubtedly a horrible company. Revenue has been dropping for years (-33.8% YoY), and Chicken Soup for the Soul Entertainment (CSSE) has already agreed to buy it for $375 million. The important part is that only $50 million in CSSE stock is being given to Redbox shareholders. The remaining $325 million is Redbox's debt that CSSE shareholders are assuming. That equates to 0.087 shares of CSSE stock for every share of RDBX. At CSSE's current share price – $8.93 – RDBX shares are only worth $0.777. Besides the fact that Chicken Soup for the Soul acquiring Redbox is like if a person in bankruptcy used an inheritance check to invest in uncollectable debt at 50 cents on the dollar, this short squeeze is the most entertaining thing in the market at this moment. I cannot look away.

AUD/USD struggles below 0.6700 with eyes on Australia inflation, China PMI and Fed’s Powell

AUD/USD portrays the typical pre-data anxiety as it seesaws near 0.6685-90 during the early hours of Wednesday’s Asian session. In doing so, the Aussie pair fails to cheer the risk-positive headlines from Australia’s major customer China amid the recently firmer US Dollar.