July is a month full of important events;  summer in the northern hemisphere begins, the United States and Canada celebrate their independence and most economies in European countries reopen. The quarterly financial reports for companies traded on the New York stock exchange continue in the third week of July 2021. On July 21, several financial reports from giants such as Verizon, Johnson & Johnson, Coca-Cola, and Intel will be published.

Pharmaceutical and biotechnology giant Johnson & Johnson (J&J) (MT5: #Johnson&Johnson) will be the main focus of investors on July 21, following J&J being one of the companies to successfully produce a vaccine for the Covid-19 pandemic. Accordingly, J&J’s main revenue is expected to come from the Covid-19 one-dose vaccine supply sector and medical devices. The first quarter report of 2021 exceeded market expectations, where the company reported earnings per share (EPS) of $2.32 and revenue of ~$20.6 billion last April. 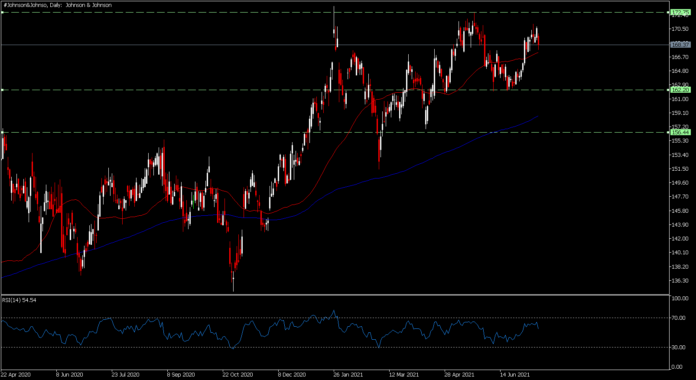 The market expects an increase in revenue and EPS for the quarterly financial report ending June 2021. J&J is expected to report quarterly EPS of $2.28, an annualized (y/y) increase of 36.5% over the same quarter last year. Meanwhile, revenue is also expected to increase 21.5% from the previous quarter at $22.27 billion. The market expects no major surprises in the report from J&J given the company’s history of consistently exceeding or meeting market projections over the past four quarterly reports. Zacks places J&J in the #3 ranking, a hold. Shares of Johnson & Johnson (MT5 #Johnson&Johnson) have risen 9.24% since the beginning of 2021. It is currently trading at a price of sub $170, slightly lower than the 2021 high of $173.57. The J&J price movement trend is still heading upwards where both 50-day and 200-day MA are still pointing higher. Yet it has been moving in the $162-$172 range consolidation since last April. Johnson & Johnson will release its quarterly report ending June 2021 on July 21 before the New York stock exchange opens. 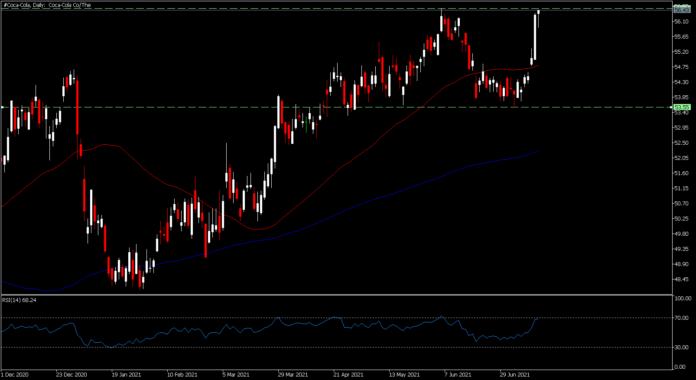 Meanwhile, beverage giant Coca-Cola (MT5: #Coca-Cola) will also publish its quarterly report on the same day. Zacks expects the beverage giant to announce earnings per share (EPS) of $0.55, a 31% increase over the same quarter last year, with revenue up 31.5% to $9.4 billion. Despite the Cristiano Ronaldo and Coca-Cola incidents at the Euro 2020 tournament, the quarterly financial report is not expected to be impacted. Coca-Cola’s stock price for 2021 has been quite a roller coaster, where it recorded a big fall to $48.14 before soaring back to a 2021 high of $56.48 and now trading slightly lower at $56.43, a 3.8% increase for 2021. Zacks also projected Coca-Cola shares in category #3, which is to maintain a stake in Coca-Cola. Coca-Cola will also release its quarterly report ending June 2021 on July 21 before the New York stock exchange opens. 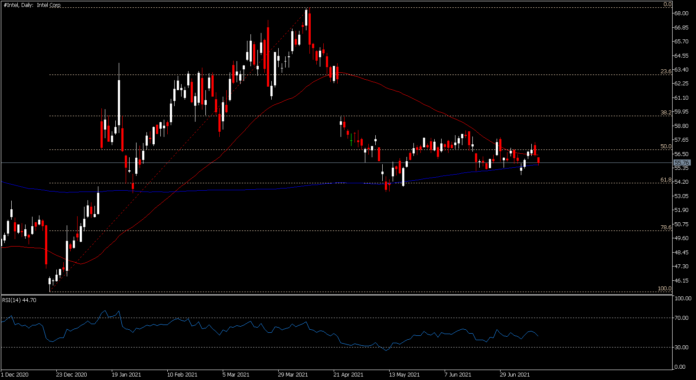 Finally the world’s largest semiconductor company Intel (MT5: #Intel) will also announce their financial report on July 21. After a relatively mixed first quarter report of 2021 where revenue was reported flat at $19.7 billion but EPS exceeded expectations at $1.39 (over 0.25% from expectations), investors are particularly interested in the second quarter report ending June 2021. Investors are expecting a decline in revenue from Intel following the intensifying level of competition in semiconductor technology. After Apple announced it would use its own chip in 2020, causing Intel to lose one of its key customers, Intel’s reputation was further tarnished when they announced a delay in production of the new generation XEON processor to 2022. The new leadership under CEO Pat Gelsinger is still working hard to make Intel more competitive and the latest news about Intel’s interest in buying semiconductor maker GlobalFoundries Inc for $30 billion gives Intel some light. The market is projecting a decline in revenue for Intel when they announce their financial results on July 21. The market expects Intel’s revenue to decline to $17.73 billion, a 10% drop from the same quarter last year, while EPS is expected to decline -13.8% to $1.06 per share.

Zacks placing Intel shares in the #2 ranking (a buy speculation). Intel also has a history of reporting EPS exceeding market projections over the past four quarterly reports. Intel is currently trading at $55.76, higher than the 2021 opening price of $49.96. It jumped to highs at $68.48 in April before declining again. It is currently trading between the 50-day MA and 200-day MA which indicates that Intel’s price is currently in a consolidation phase. Intel’s financial report this time is expected to provide a catalyst for the direction of Intel’s next price movement. Intel will also release its quarterly report ending June 2021 on July 21 after the New York stock exchange closes.