Polestar (PSNY) extended its decline to a fourth consecutive trading day on Wednesday during a volatile session on Wall Street. On Wednesday shares of PSNY  dropped by 1.6% and closed the trading session at a price of $6.77. It was a rollercoaster ride of a day for investors as the markets awaited the latest interest rate hike from the Fed. Not surprisingly, the raise came in at another 75 basis points, and stocks rallied but then sold off leading to the closing bell. Overall, the Dow Jones lost 522 basis points, the S&P 500 dropped by 1.7%, and the NASDAQ sank lower by 1.8%.

As can be expected during a volatile day of trading, growth sectors were once again hit hard. EV stocks tumbled into the close as Tesla (NASDAQ:TSLA), Rivian (NASDAQ:RIVN), General Motors (NYSE:GM), and Ford (NYSE:F) all closed the day below water. Chinese EV makers Nio (NYSE:NIO) and XPeng (NYSE:XPEV) dropped by 10.3% and 11.6%, respectively, as persistent COVID-lockdowns and a troublesome real estate market continued to weigh on the Chinese economy. 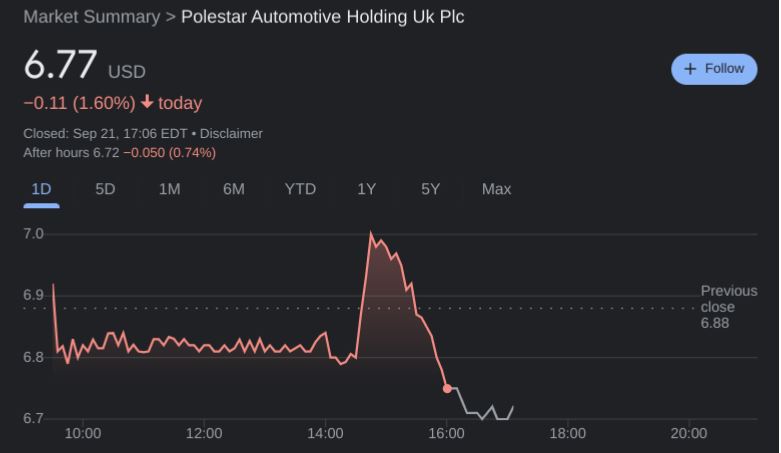 Polestar’s parent company, Volvo, unveiled its newest flagship EV model on Wednesday. The fully electric SUV will be named the EX90 and will be the electric counterpart to the popular XC90 model. The official launch will be at an event on November 9, but some early features were provided including an invisible security shield that is composed of LiDAR sensors.