Bitcoin (BTC) hit a record high on Wednesday, and the timing could not have been better for the launch of the first US-based Bitcoin ETF. The Proshares Bitcoin Strategy ETF (BITO) came out of nowhere to become the first one to launch. BITO debuted on the NYSE exchange on Tuesday, and Bitcoin broke above $66,600 on Wednesday.

The Proshares Bitcoin Strategy ETF began trading at $40.88 and owns BTC futures listed on the Chicago Mercantile Exchange (CME). BITO then rallied nicely on Tuesday and Wednesday as Bitcoin itself took off for all-time highs. Bitcoin price (BTC/USD) has been benefitting from the imminent launch of multiple ETFs, and BITO was the first one out of the block. BITO closed up at $41.94 on Tuesday and closed 3.2% higher on Wednesday at $43.28. Currently, it is likely to lose some ground as Bitcoin drops back slightly to $66,100. Fidelity said the BITO ETF was the second most-traded security on its platform on Tuesday.

The launch of more Bitcoin ETFs is due imminently and increases the growing acceptance of Bitcoin. Due shortly are ETFs launched from Valkyrie, VanEck Bitcoin Trust and Galaxy. Retail interest is likely to be the dominant interest in these ETFs, similar to Bitcoin and crypto in general.  According to a report from Reuters: "Dave Nadig, chief investment officer and director of research at ETF Trends, noted on Tuesday there were very few block trades in BITO, suggesting smaller investors and high-frequency trading firms dominated trading." 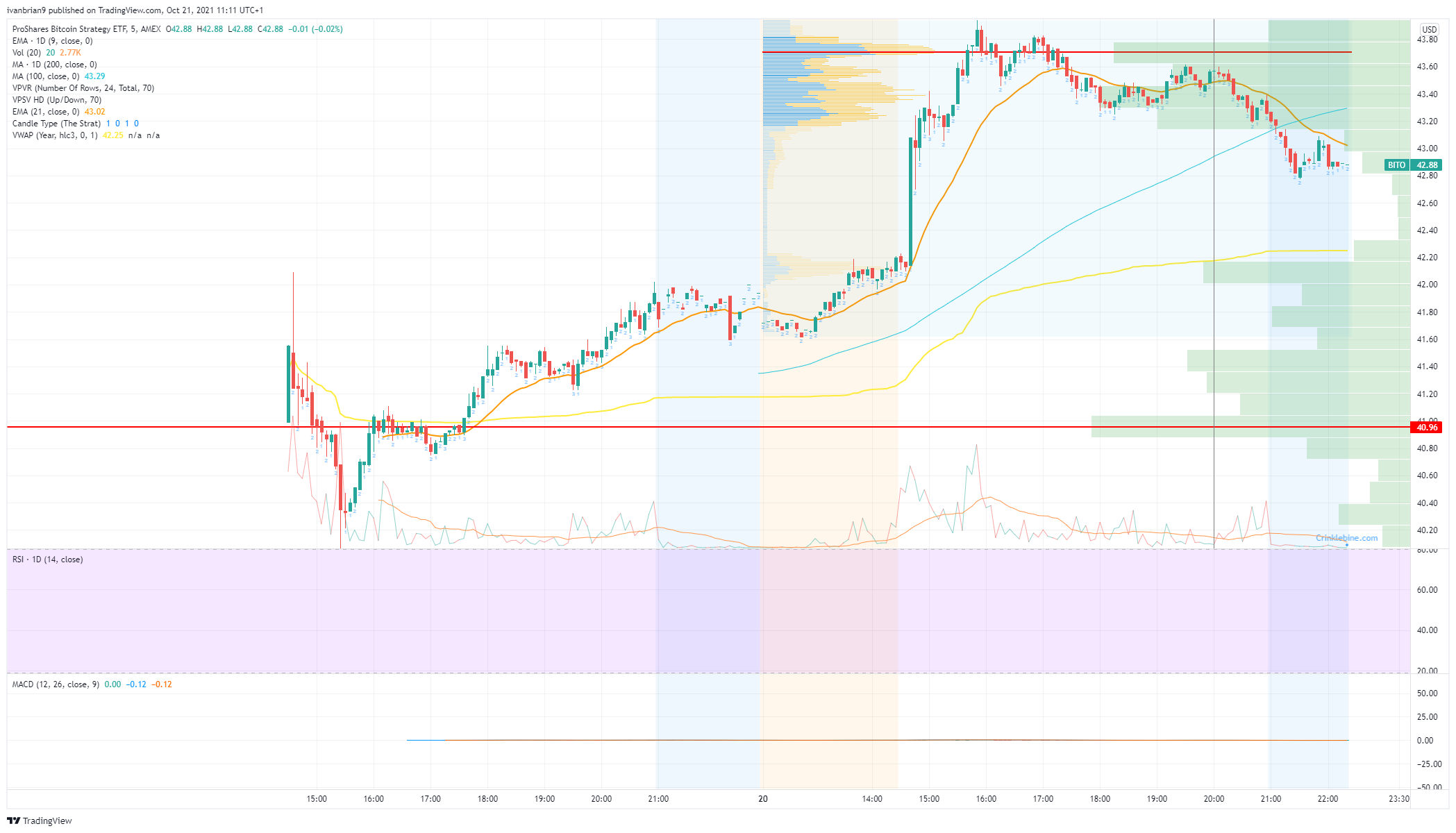 While it may be tempting to do some analysis on the chart, really what we are trading with BITO shares is a proxy for Bitcoin, so it is better and easier to do our analysis on the underlying asset. For now, that is the main driver as that is where the volume is. It is the volume that dictates the direction of price. Technical analysis should always take its cue from the highest volume instrument. For example, the futures contract is what drives the oil price, not the underlying cash, similar to most other commodities. In FX it is the cash or spot price. Futures are only a tiny percentage of the spot FX market.

The opposite is true for stock indices. The futures contract is where the volume is and drives the cash price. Just in case you don't believe us, check out the 5-minute chart of BITO since IPO launch versus the Bitcoin futures on CME and Bitcoin Cash on Coinbase. Pretty much tick for tick. 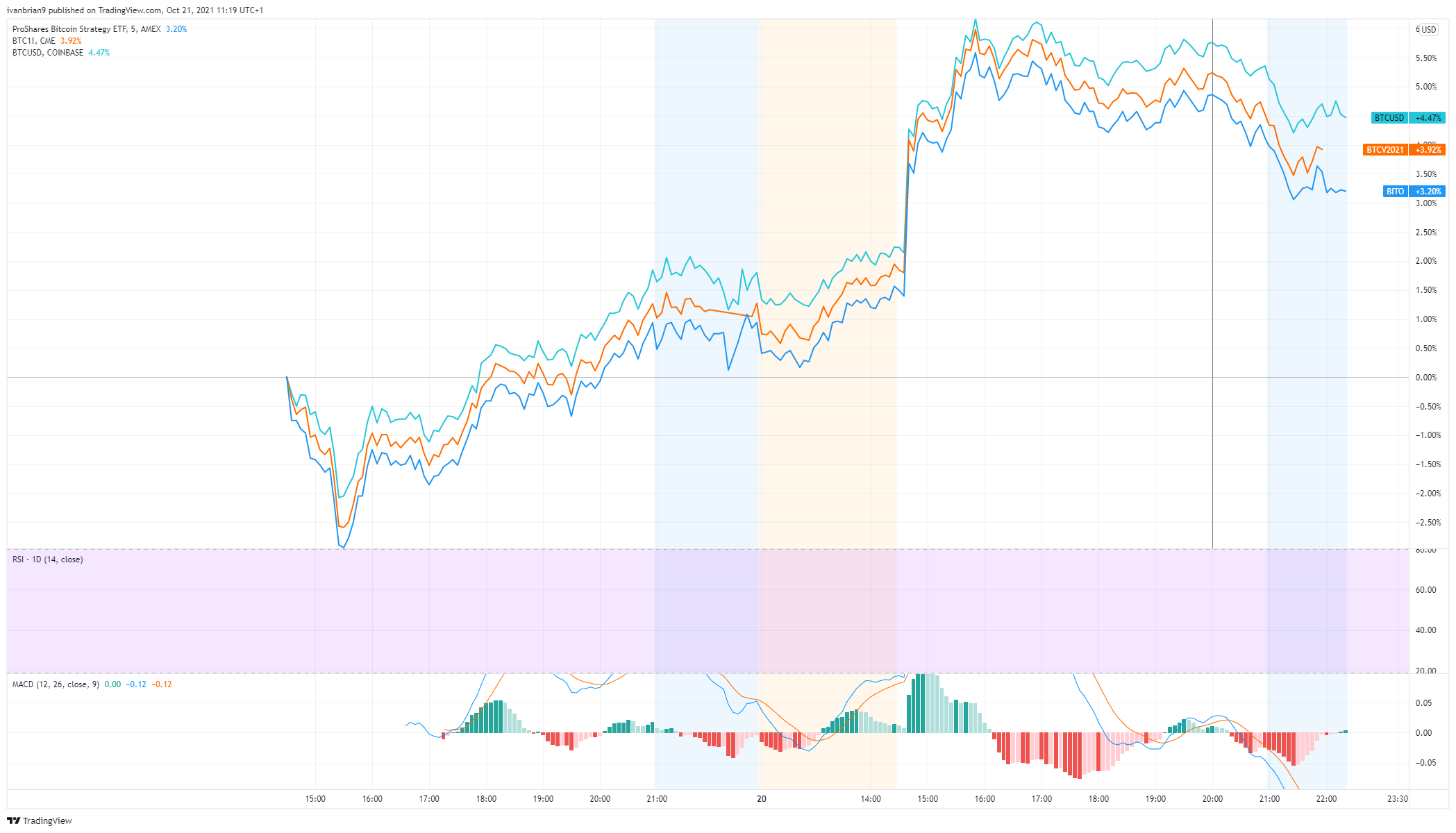 We will do our analysis on Bitcoin and the price of BITO stock will follow.

Bitcoin has clearly been on a charge ahead of the launch of the various ETFs. Another is due tomorrow from Valkyrie Bitcoin Futures ETF (Nasdaq: BTF). There were plans for the ticker to be BTFD, but apparently this will now be BTF. Bitcoin has been rallying as ETFs are seen as broadening the potential purchasers of Bitcoin. Many stock traders may not have access to Bitcoin from their brokerage accounts, but the presence of a more regulated ETF may lure them in. Will this then be a case of buy the rumour, sell the fact?

From the chart, Bitcoin is clearly bullish, trading strongly and over the 9 and 21-day moving averages. Bitcoin (BTCUSD) is now overbought on the traditional Relative Strength Index (RSI) metric. Most use 70 to show overbought, but we prefer the stretched level of 80 as this rules out a lot of false signals. BTC price is at 79 now on the RSI. It has been here before, but caution is definitely needed. The launch of the Valkyrie Bitcoin Futures ETF on Friday may increase the bull move tomorrow, and Bitcoin traditionally has performed well toward the end of the week. Sunday is often when things turn.

There is huge volume profile support at $57,500 and then $47,000. The 200-day moving average is also at that level, adding to its support status. That may be a long way down, but Bitcoin is volatile as we know! 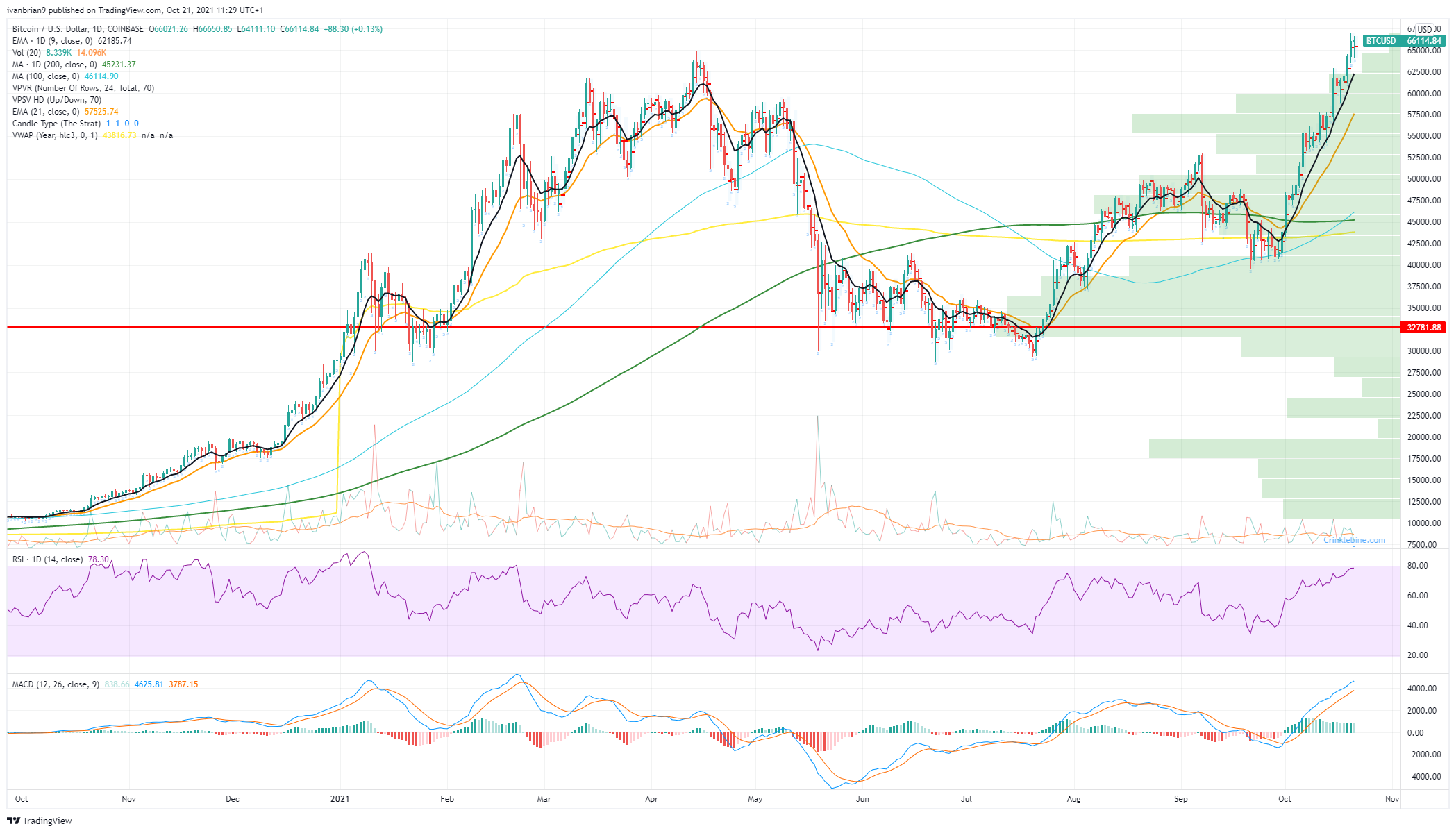