UPDATE: Plug Power stock surged 21.8% to $20.94 early Thursday on news of President Biden's energy deal with Senator Manchin. The infrastructure funding should help PLUG and a bunch of other alternative energy names. This places shares of PLUG at their highest price since early May. PLUG is now trading in line with the 30-week moving average, which is often the line between uptrends and downtrends. 2, 278 contracts for the $20 call strike price expiring August 5 exchange hands in the first hour of Thursday's session. The price per contract share rose more than 1,100% to $1.83.

Plug Power (PLUG) stock spiked in afterhours trading as a surprise announcement caught investors off guard. While all eyes were on the Fed, it turns out that holdout Senator Joe Manchin (D-WVA) reached a deal allowing President Biden's energy deal to be pushed through. This deal had looked to be dead in the water as recently as early July when the Democratic Senator said he could not agree to the deal and pulled out of negotiations. Most noteworthy in the delay and discussions is Senator Manchin's reported ties to the coal industry, which have been cited as reasons for him to stall the deal.

The Inflation Reduction Act extends some Obamacare subsidies in healthcare and aims to support alternative energy sectors. Nearly $400 billion would be used to fund climate and energy programs as part of the act. Other stocks moving higher include some familiar names such as FuelCell (FCEL), First Solar (FSLR) and Jinko Solar (JKS). This will be a boost to the Biden administration ahead of the autumn mid-term elections and is likely to receive widespread media attention by putting more focus on solar and green energy stocks.

PLUG Power is due to report earnings on August 4.

PLUG reached a deal with Walmart in April for the supply of green hydrogen to power lift handling trucks.

Overall, we remain mixed on PLUG stock. It has yet to turn a profit and has in our view been relying too much on debt. This is not a good combination in the current environment. Shares outstanding have also been diluted via stock-based compensation and capital raising. Shares outstanding have more than tripled in the past five years. Long-term debt has moved from $50 million in 2016 to over $500 million currently.

The long-term bearish trend remains in place with key support at $14 and resistance at $20. A breakout from this range should see PLUG test the 200-day moving average at $25.44. 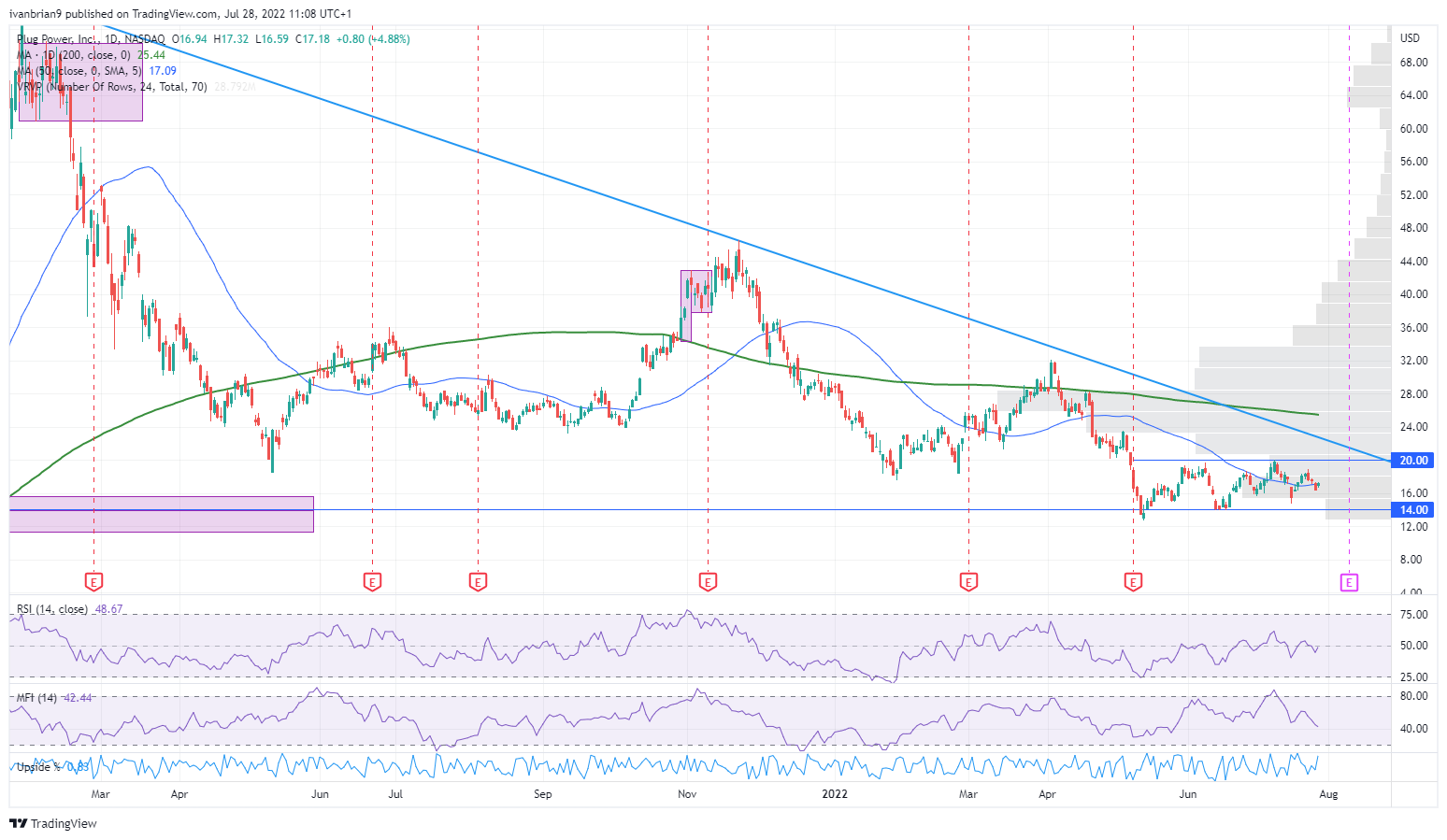